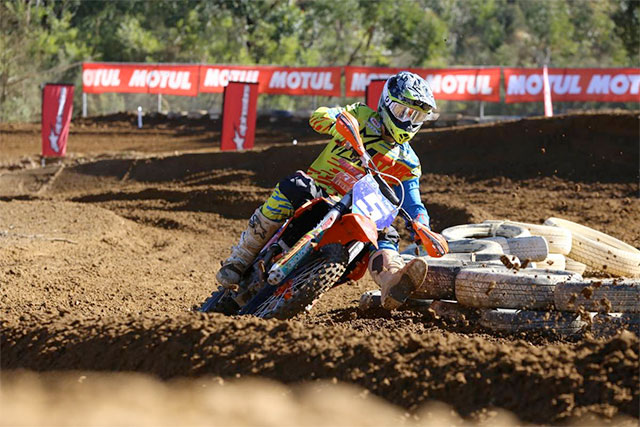 Raceline Pirelli KTM rider Wade Kirkland has raced to a career first Pirelli MXD round win today, at the sixth instalment of the the Motul MX Nationals at the Nowra Motoplex in New South Wales.

The Pirelli MXD Class roared back to life this morning, with Australia‰Ûªs young and upcoming riders all returning to bar banging racing, putting on an exciting performance for tons of spectators.

When MXD qualifying got underway this morning, it was a surprise performance from Yamaha mounted Lochie Latimer which saw the youngster put down the fastest lap time and collect first gate pick, while red plate holder Connor Tierney (Husqvarna) was second fastest, followed by Raceline Pirelli KTM‰Ûªs Kirkland who wrapped up the session with third pick of the grid.

When gates dropped in moto one for the Pirelli MXD class, the MXStore holeshot was snatched up by fastest qualifier Latimer, followed by Kirkland who also successfully got through the tight first turn in second position.

After a handful of laps, spectators were treated to a battle for the MXD moto one race lead, with Latimer, Kirkland, and red plate holder Tierney all within striking distance of each other, while Yamalube Yamaha Racing Team‰Ûªs Mitchell Evans also joined the party in fourth.

With the four riders going head to head, the pressure was on, and by lap nine the running order behind race leader Latimer had changed - Evans making the move on both Tierney and Kirkland to move in to second position, while Tierney maintained third ahead of Kirkland who dropped back to fourth.

As moto one reached its closing stages, Latimer continued to put in consistent laps, and by the time the last lap board was shown, the Yamaha rider was well and truly in the box seat to take his first Pirelli MXD win for the year.

And when the chequered flag flew, Latimer had reason to celebrate, taking the race win from Evans in second, while Kirkland recovered from an earlier mistake to finish moto one in third. Despite applying significant pressure for the lead in the early stages of the race, points leader Tierney concluded moto one in fourth.

When the second race got underway for the Pirelli MXD class at Nowra today and bikes launched off the line for the final time, it was Yamalube Yamaha Racing‰Ûªs Evans who got to the early race lead, while Raceline Pirelli KTM‰Ûªs Kirkland slotted in to second ahead of Tierney in third.

However, it only took five laps for Kirkland to make his presence known, closing in on Evans and making the pass for the lead down the main straight ‰ÛÒ and from there the KTM rider began to stretch out the gap.

With Kirkland out in front, the running order just past the half way mark saw Evans continue to hold down second position from Husqvarna mounted Tierney, while Cooper Pozniak and Jordan Hill completed the top five standings.

As moto two reached its final stages, Kirkland‰Ûªs lead increased to an outstanding eight seconds, the young Tasmanian rider leaving both Evans and Tierney to chase his tail for one final time at Nowra.

And when the chequered flag flew, Kirkland celebrated an outstanding moto two victory, while Yamalube Yamaha Racing‰Ûªs Evans crossed the line in second, followed by Husqvarna‰Ûªs Tierney who concluded race two for the Pirelli MXD class in third. Pozniak and Hill wrapped up the final race of the day in fourth and fifth places respectively.

With Kirkland‰Ûªs third place in moto one, and a win in moto two, the Raceline Pirelli KTM rider was awarded with the round six victory at Nowra, while Evans and Tierney secured second and third places on the Pirelli MXD podium. After today‰Ûªs racing, Husqvarna Australia‰Ûªs Tierney continues to lead the Pirelli MXD championship by 18 points.

‰ÛÏIt‰Ûªs been a long road to get to the top step of the podium that‰Ûªs for sure. I got to a pretty good start to the season and it all came together at Nowra today,‰Û