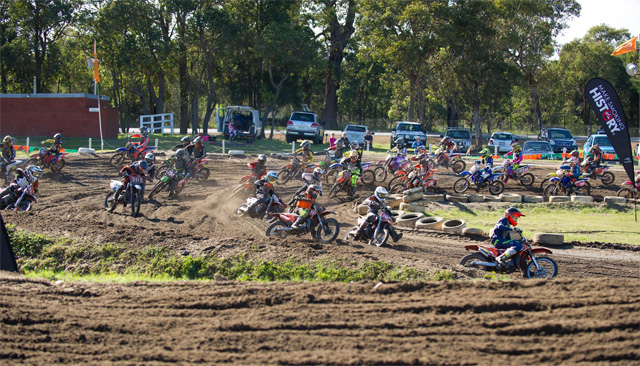 The penultimate Make Smoking History WAMX Junior State Championship round 5 at Bunbury continued on Sunday with dominant racing action, with some championships already decided, some may have been lost and some still hang in the balance with one round left to decide this year‰Ûªs titles.

Just a month out from the AJMX in September, and there was a buzz in the air with a bumper rider list with riders from the Eastern states making the journey across for some pre Nationals racing experience, which had some classes introducing qualifying such were the grid sizes.

A sensational WA winters day with sun and clear blue skies spanned the entire meeting, and the Bunbury Motorcycle Club provided a slick and fast track to test and also tempt the riders.

The 65cc class have been combined and scored separately this season, and the racing lifted to a new level on Sunday at Bunbury. Those who were predicted to fly, soured whilst others had a day to reassess the title chase.

In the 7-U10 years, Tyler Soloman (1-1-1) took the top step of the podium and a slender 9 point lead in the title standings. Kayden Minear picked up second for the day with Jake Harvey securing third place. Kobe Drew, Jaylee Rimbas, Harrison Tapper and Mitch Ackland featured in the top ten. Cohen Guyatt, Taj Moore, Seth Clark and Cobey Brown will be left to try and salvage points at the final round.

In the older age group 10-12 Years Cody Chittick secured the round win and one hand on the championship title. Seth Manuel kept his consistency on track with second for the day and eastern states rider Benny Novak picking up third place. Bike issues damaged Liam Atkinson‰Ûªs championship and any chance for Myles Gilmore. Lewis Callow, Brock Flynn and Bailey Smith rode hard all day.

85/150cc 9-12 years class had the round win to Liam Atkinson with a perfect scorecard (1-1-1) and Seth Manuel picking up second for the day ahead of Cody Chittick who was third. Myles Gilmore, Evan Browne, Jake Minear and eastern states riders Benny Novak and Lewis Callow worked hard in some pretty tough track conditions, but picked up plenty of tips for the upcoming Nationals.

85/150ccc 12-16 it was a welcome return to Regan Duffy who picked up the round win (1-1-1) ahead of series leader and second placed Mitch Outram (2-2-2) and Corben Weinert who secured the remaining step on the box for third overall. Jacob Daniels was in possibly his season‰Ûªs best form with Rhys Burnett, Jai Gimenez, Riley Stephens and Conan Forrester returning to racing, and losing none of his speed either!

100/125cc 13-15 years with Billy Middleton out for the rest of the season, Mat Fabry (1-1-2) took full advantage to race to the round win ahead of Regan Duffy (4-2-1) and third placed Mitch Outram, who‰Ûªs results has him as the new series leader by only 12 points. Kurt Oinn, Jeffrey Head, Riley Stephens, Kyle Gillespie, Austin Ridley and Luke Porter continued their season battles.

In the older age group, 100/125 cc 15 Years, Justin Hart continued his season with another perfect round result. His (1-1-1) scorecard has him 40 points ahead in the series lead ahead of Dale Doutch who finished third for the day, behind the very fast and consistent Jonathon Hartley, who picked up second position. Tom West, Cody Heggs, Dylan Hennessey and Ryder Smith continued their top five battles across the day.

The 128-150cc/250cc Defending champion Justin Hart has a massive 99 point championship winning lead in the standings. His again perfect record remained intact with another round win (1-1-1) at Bunbury. Jonathon Hartley and Mat Fabry finished the day on equal points with the countback having Hartley securing second for the day from Fabry in third. Kurt Oinn, Jake Woods, Justin Walker, Nick Williamson and Kyle Elliot were in the mix and there were also some spectacular crashes across the three motos, hampering rider results. It was also a day of positives, with a welcome return to racing to Lily Kent.

Full series results can be found at www.mylaps.com

Round 6 heads to Pinjar Park, Wanneroo on September 13th.