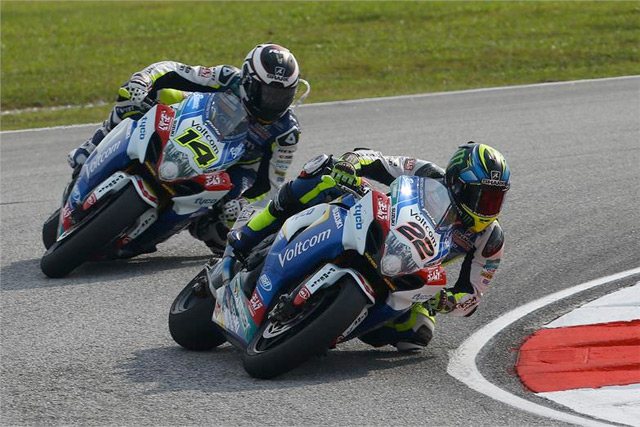 The long summer break is finally over for Voltcom Crescent Suzuki as Alex Lowes and Randy de Puniet return to Spain this week for the 11th round of the eni FIM Superbike World Championship on Sunday September 20th.

The previous round concluded at the start of August with a dramatic race day at the Sepang International Circuit, as Lowes was forced to bear the brunt of Max Biaggi‰Ûªs first corner crash in the second race ‰ÛÒ his swift avoidance relegating him to the back of the pack and ensuring a determined fightback of mammoth proportions to take an eighth place finish ‰ÛÒ but the British racer, who turned 25 on Monday, is looking forward to getting his season back on track at the Jerez Circuit.

The scene of consistent strong running on his Yoshimura-powered GSX-R during pre-season testing, Lowes is hoping the experience gained during July‰Ûªs Suzuka 8-Hour and Malaysia‰Ûªs WSBK races will allow him to challenge the frontrunners in the AndalucÌ_an heat.

‰ÛÏI can‰Ûªt wait to get back on my GSX-R and ride again at Jerez." Lowes said. "For me the summer break is too long, especially with the ban on testing, so I am eager to get to Spain and start building on the progress made over the last few races.

"We have been solid recently and I hope to keep improving for the rest of the year. I have three weekends to do the best I can possibly do, and that is what I‰Ûªm aiming for now!

‰ÛÏThe track at Jerez is one we get to ride a lot with all the testing that goes on there! I really enjoy the layout, it has some great sweeping corners and a couple of hard-braking areas. The faster corners are better for me and the Suzuki but I will be working harder on getting in and out of the slower corners this year to make us more competitive.‰Û