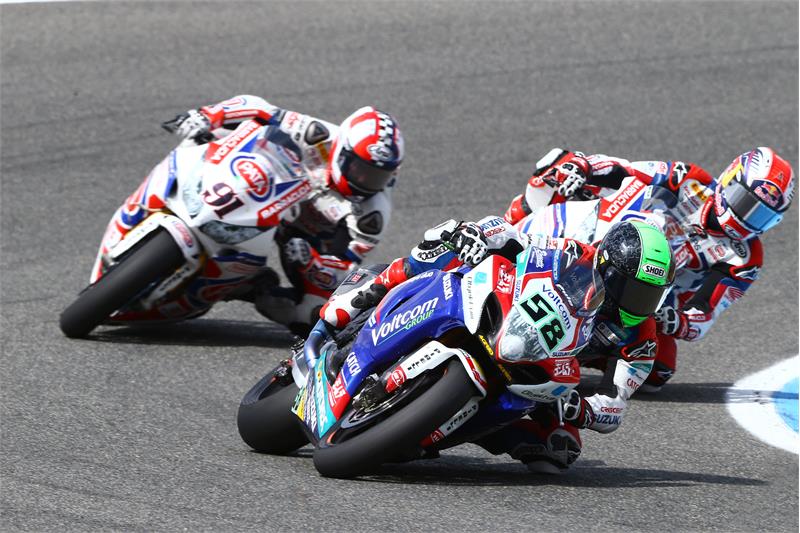 Four weeks on from its last race, Voltcom Crescent Suzuki travels to France this week as the eni FIM Superbike World Championship returns to the Circuit du Nevers Magny-Cours for 2014‰Ûªs final battle on European soil.

Delivering two strong sixth-placed finishes in the Jerez races last month, Eugene Laverty is determined to end his Superbike career with a return to the podium on board his Yoshimura-powered GSX-R.

Having previously climbed the rostrum three times at the French circuit in recent years, the Irishman is looking to continue his development with the GSX-R1000 for the final two rounds before setting his sights on the GP class for 2015.

"I really expected podium finishes last time out in Jerez so I left feeling very disappointed." Laverty said. "We need to find a way to transform our strong pace in practice into race pace.

"It's no secret that we have struggled to match the others on new tyres and a full tank of fuel and I hope we can make improvements in this area for Magny Cours.

‰ÛÏWe've found a much-better clutch-setting though, allowing me to make consistently good starts and that's a huge positive. My aim is to qualify on the front two rows at Magny Cours, make a good start; and then fight with all my might!"

With two outings at the Magny-Cours track already under his belt from his early Superstock career, Alex Lowes is hoping his previous knowledge from 2008-9 will allow him to hit the ground running on his return to action during Friday morning‰Ûªs first free practice session.

The Crescent team has been hard at work since Jerez and has a new engine brake control strategy to introduce at the French circuit as well as other smaller updates so Lowes is looking forward to getting to grips with the NiÌ¬vre circuit, believing the Suzuki GSX-R has what it takes to tackle its technical layout.

‰ÛÏI‰Ûªm really looking forward to Magny-Cours, we‰Ûªve had an inconsistent few races but we‰Ûªve made changes going in to this weekend." Lowes commented. "It‰Ûªs a track that I‰Ûªve previously ridden which will make a positive difference for this year.

"The team has made some improvements since Jerez and I can‰Ûªt wait to get out there, work hard for the final two rounds; and get some results that the team deserve so we can all finish the year on a positive note.‰Û