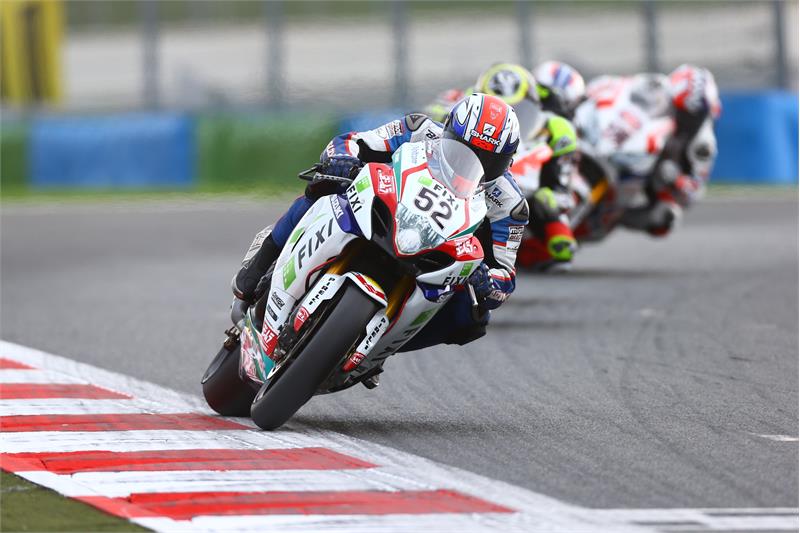 Philippe got a solid start from the third row and by lap-two he was up into eighth. He then got into a smooth and consistent rhythm on his Yoshimura-powered Suzuki GSX-R before moving up to sixth by lap-six.

The Frenchman pulled a gap from the following group, but was too far adrift of the front pack to make any in-roads, so continued with a solitary - but impressive - race to steer his machine to sixth at the chequered flag to complete a successful debut weekend for the Suzuki Endurance Racing Team rider. Suzuki's reigning World Endurance Champion, who was replacing the injured Leon Camier, had shown his potential in race one after starting from ninth on the grid and then getting involved in a five-rider battle for sixth place. Philippe looked at home in the tussle and was hard-on-the-heels of Toni Elias when the Spaniard crashed, taking the Suzuki-man down with him.

As the two came to a halt Elias inexplicably remonstrated with Philippe for something that was clearly his own fault. The Frenchman looked astounded at this, but quickly re-mounted and continued to push hard, before eventually taking 13th at the flag,

"What a great weekend," Philippe enthused. "For sure first of all I need to thank all the staff on the team and especially the mechanics. Everybody has helped me a lot to be able to understand the bike, the suspension, the electronics and the tyres; in fact in every aspect. It is a fantastic bike and a fantastic team and it has been easy for me to learn all about it and feel good on the bike.

"I pushed in the second race, not too much and I am so happy with the result. In the first race it was a very good fight and great to battle with the top riders and it was a shame what happened, but that is racing.

"In the second race it was better for me because with my style that sort of fight is not what I am used to and I need more experience, so when I was alone it was easy for me to ride like I wanted to. It has been a good weekend and I have got lots of experience from it.

"I would like to ride the FIXI Crescent Suzuki again, but if not that is ok, because this has been a good present from the team and Suzuki France, and thank-you everybody," he concluded. 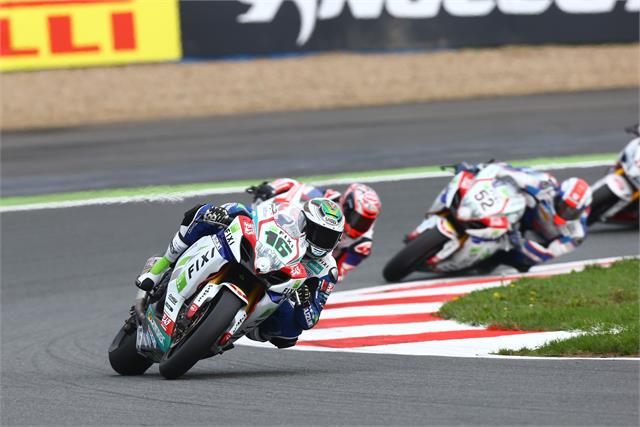 Jules Cluzel had a shocker of a weekend in France crashing out of both races at his home round - Credit: Suzuki Racing
Jules Cluzel had two races that he was very disappointed with at his 4,411m home circuit. Starting from 12th on the grid in race one, he had made up four places by the end of the first lap. He pushed hard over the next lap, moving-up to sixth place and closing on the leading group.

Sadly for the Frenchman his fast-charging cost him dear as he crashed heavily on lap-three bringing his race to an early end. Cluzel's second race followed a similar pattern as he again made his way through the field to get close to his team-mate Philippe and looked to be in with a chance of challenging for sixth, but he again slipped off his machine and slid into the gravel.

He was able to re-mount and continue the race, but any chance of a high-finish had gone and Cluzel had to settle for 14th place.

"This has been the worst weekend of the year for me." Cluzel admitted. "The conditions have been awful for me and I think we need more dry conditions to improve the bike, because I struggle so much in the slow turns at the last moments.

"We only had one real dry session all weekend and it made it difficult for me. I crashed in the first race when I made a mistake because I was too fast and I tried to turn and went straight on. In race two I lost time in some straights and I tried hard to keep up, but again I crashed and had to start again.

"I think it was possible to finish in sixth or seventh, but because I lost the front that was it.

"Vincent had a good weekend; he knows the track really well in these conditions and he did a great job in the dry session too." Cluzel continued. "It is good for the team to have a good result, but I knew it was possible for me to make a better result than I did so I am disappointed about this.

"I also want to thank Suzuki France for all the support they gave us this weekend, It was great have them here," he concluded.

The World Superbike paddock will now head to Jerez in Spain for the final round of the championship on Sunday October 20th when FIXI Crescent Suzuki will be hoping to welcome Camier back to action following his lay-off due to the injury he sustained in Turkey.

Top Image: Vincent Philippe on his way to an impressive 6th place finish on debut in the World Superbike Championship
Credit: Suzuki Racing