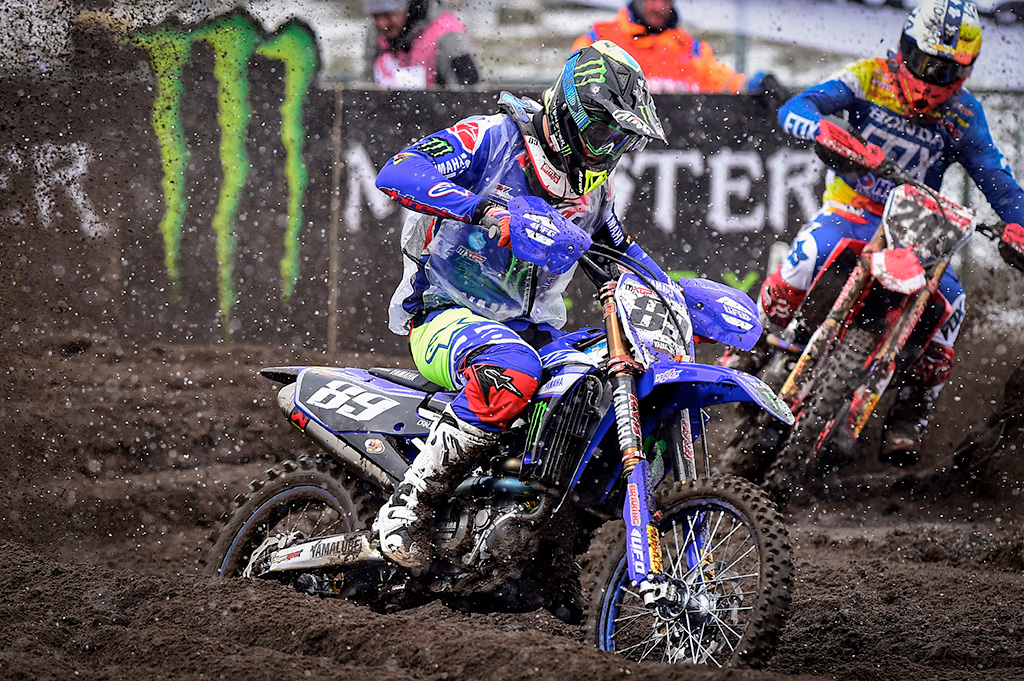 Monster Energy Yamaha Factory Racing's Jeremy Van Horebeek took the qualifying race win in MXGP by 7 seconds. Photo: Youthstream
Jeremy Van Horebeek and Thomas Covington have set the pace at a cold and wet Valkenswaard in the Netherlands overnight to kick off proceedings for tomorrows second round of the FIM Motocross World Championship, the MXGP of Europe.

Behind Herlings and Van Horebeek was last year‰Ûªs MXGP of Europe overall winner, Rockstar Energy Husqvarna Factory Racing‰Ûªs Gautier Paulin and 2016 MXGP World Champion, Team HRC‰Ûªs Tim Gajser. Gajser who is returning from an injury suffered only one month ago showed he wasn‰Ûªt phased by the pressure or the conditions.

First to press onto the back wheel of Gajser was Wilvo Yamaha Official MXGP‰Ûªs Shaun Simpson, however near crash and impressive save by Simpson allowed Gajser some space to breathe. Though it was not long before Red Bull KTM Factory Racing‰Ûªs Antonio Cairoli slid past a rattled Simpson and closed on the Slovenian.

Simpson later made a mistake which he was unable to save as did Monster Energy Yamaha Factory Racing MXGP‰Ûªs Romain Febvre. However the most notable crash and mistake was the one of Jeffrey Herlings while leading. The #84 tucked the front wheel on the landing of a double resulting in a crash. Herlings once going again, pulled into Pit Lane convinced that he had broken his front wheel. As the mechanics of Herlings rushed to swap out the wheel Van Horebeek led. 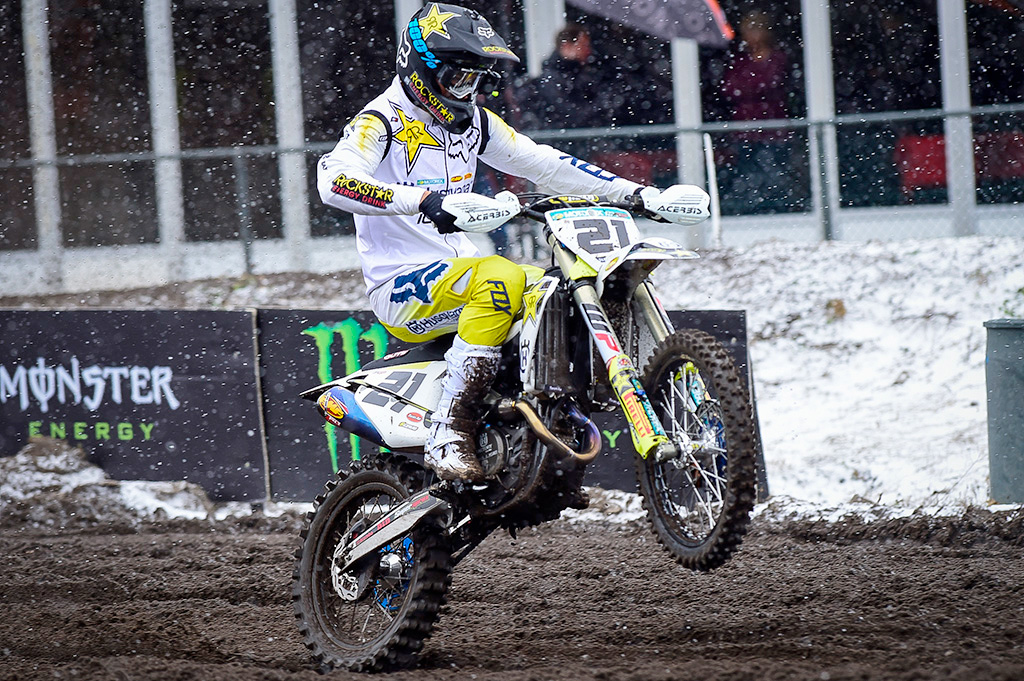 Frenchman Gautier Paulin finished second in the MXGP class after a tough race through the cold and snow conditions. Photo: Youthstream
"There was something wrong, obviously I went down and came in (to Pit Lane)," Herlings explained. "I thought I had a broken wheel, which it wasn‰Ûªt, but it doesn‰Ûªt matter, it is racing and things like that happen. I‰Ûªm feeling good, I‰Ûªm feeling strong so I just need 2 good starts tomorrow from that position and work from there.‰Û 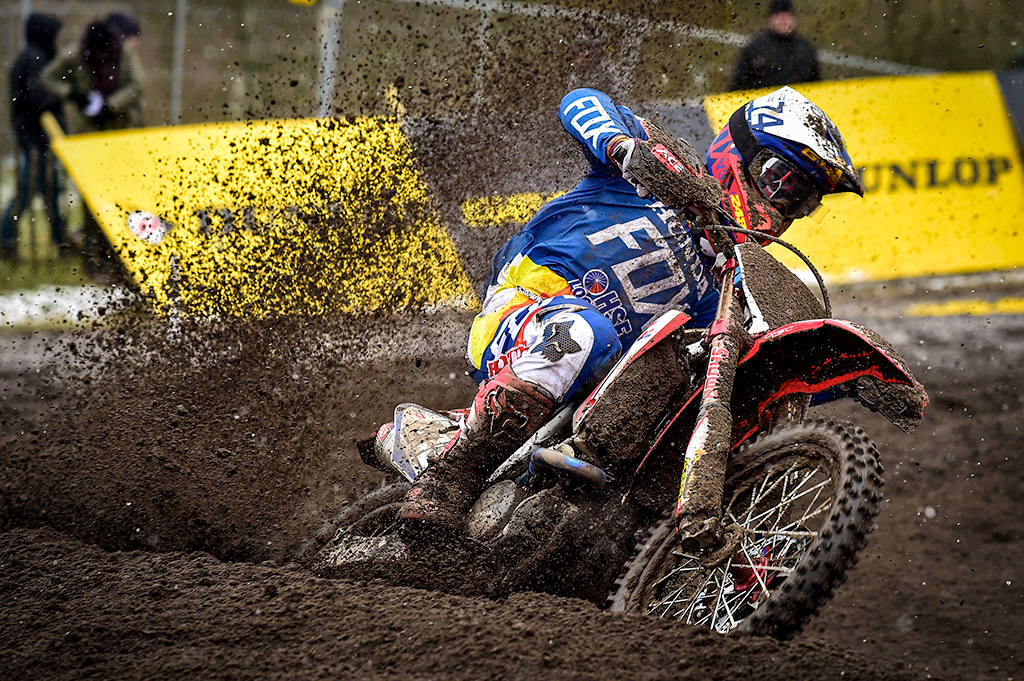 HRC's Tim Gajser made an impressive return to racing after returning from a broken jaw that kept him out of the opening round. The former World Champ finished third in MXGP. Photo: Youthstream
"The track suits me well, I feel good, and you know on this kind of track you just have to enjoy and ride smoothly because if you ride too aggressive you won‰Ûªt go fast," Van Horebeek said. "It was a good day, I had a good start and I think that is the key, just to start in the top three and ride your own race.‰Û 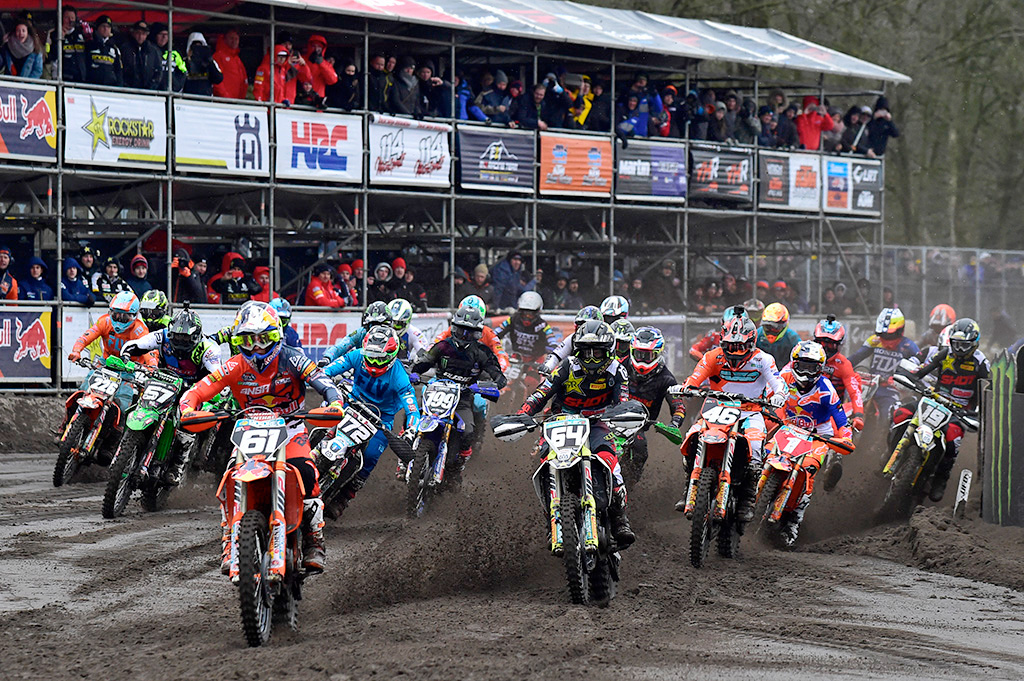 2017 MX2 podium finisher, Brent Van doninck who now rides for the Husqvarna 8biano Motorsports team put in a solid race for 5th place to position himself well for a repeat of last year‰Ûªs performance.

Back at the front, a last lap error from Prado came up costly as tried to negotiate his way past lapped riders. Prado fell which let both Covington and Jonass get by before the finish allowed Covington to score his first pole position of the new season.

"The start was so important today‰Û_I am proud I got a good start behind Prado, and I followed him for most of the race just trying to stay with him," Covington said. "He (Prado) was going pretty fast at the beginning, but in the end, we came into some lappers, and I was able to capitalize on his mistake down the hill.‰Û 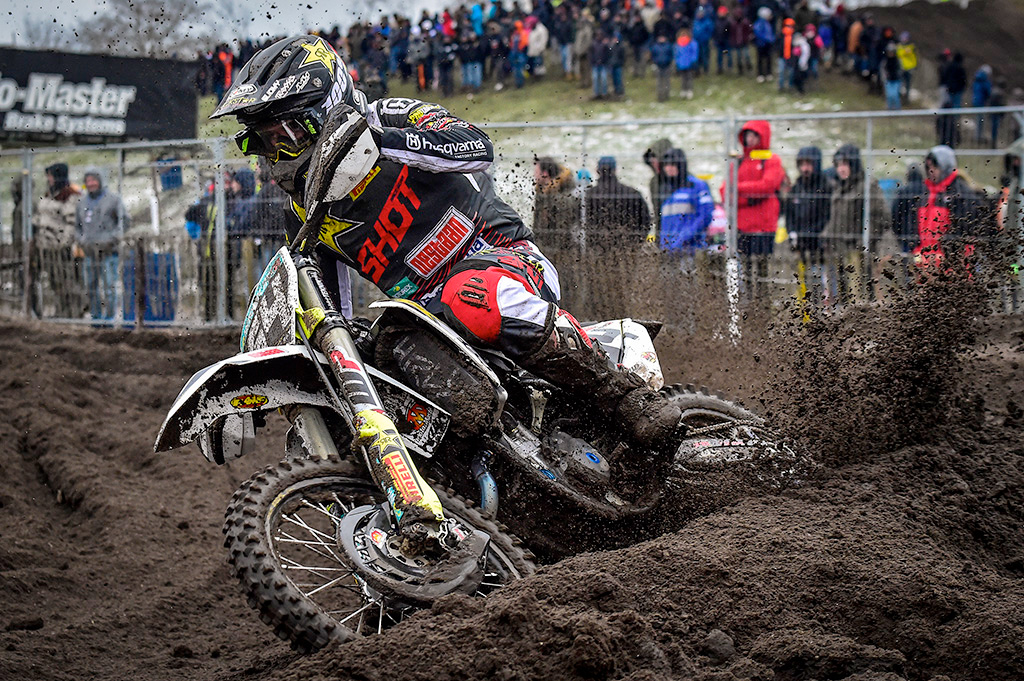 American Thomas Covington will have the top gate pick in MX2 after coming out on top of the qualifying race. Credit: Youthstream.
Honda 114 Motorsports‰Ûª Hunter Lawrence struggled to bring his Argentinian success into the European qualifying race as he shifted between 8th and 9th position before sneaking into 6th at the finish. Australia's second representative, Jed Beaton finished in 13th place.

Another rider who did well in Argentina but came up short during qualifying was BIKE IT DRT Kawasaki‰Ûªs Darian Sanayei. Sanayei who led laps in Patagonia ‰ÛÒ Argentina will head the start in 16th tomorrow.

"After Argentina, I got pretty sick, I am just kind of getting over that, and thankfully I could train this week. I felt confident coming into this weekend, but everything didn‰Ûªt add up today," Sanayei said.

Alongside the MXGP and MX2 stars were the first round of the European Championships of EMX125 and EMX300 both Presented by FMF Racing.

The group of 300cc racers was composed of both former champions and upcoming stars. Last year‰Ûªs title competitors, Brad Anderson and Mike Kras, again found themselves at the front of the field, but the young Belgian Greg Smets would take the lead from Kras early on his way to his first ever European Championship Race win as Kras and Anderson took 2nd and 3rd.

In EMX125 class former 85cc Junior Motocross World Champion Rene Hofer also took his first European Championship race win against a field of more than 80 riders at the start of the day including Emil Weckman and Mario Lucas Sanz in 2nd and 3rd.