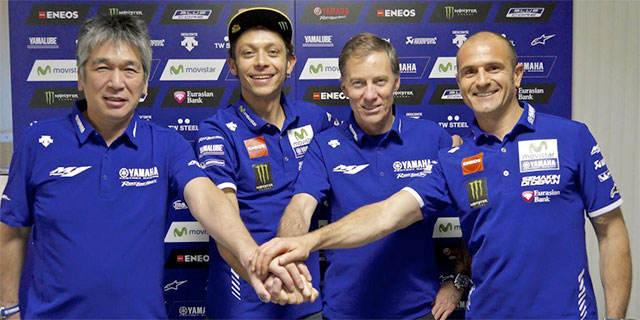 Valentino Rossi will remain a part of the Movistar Yamaha MotoGP team‰Û÷s rider line-up for the MotoGP World Championship season of 2017 and 2018.

Rossi has had a very special bond with his beloved YZR-M1 starting from his first race with Yamaha at Welkom Circuit, South Africa, in 2004, which ended in an iconic win. The combination of ‰Ûªthe Doctor‰Û÷ and the YZR-M1 has gone from strength to strength since and together they secured four titles and 53 Grand Prix wins over ten seasons.

With fifteen brilliant podiums and four strong GP victories in the last year, Yamaha is confident in their partnership with Valentino Rossi and looks forward to being a serious title contender for 2016 and the following seasons.

"I am very happy to announce that Yamaha and I have extended our contract and will continue working together in MotoGP for the next two years," Rossi said.

"I am very satisfied with this decision, because it has always been my plan to compete in motorsports for as long as I can be competitive and find it enjoyable at the same time. Ever since I returned to Yamaha in 2013 I have felt like I am home again and this showed in the results. I get great enjoyment out of working with my crew and the rest of the Movistar Yamaha MotoGP team.

"Their support for me has known no limit and I want to thank them sincerely for that. I‰Û÷m feeling greatly motivated to keep riding my YZR-M1 for the best results possible, this year and the following two seasons.

"I also want to say a big 'Thank You' to my fans, who are always behind me every step of the way, making the races extra special. I will keep pushing at each and every Grand Prix so we can all keep enjoying MotoGP for more years to come!‰Û