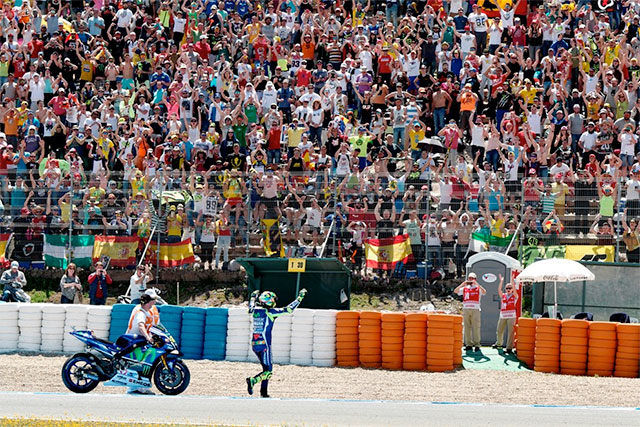 Movistar Yamaha MotoGP's Valentino Rossi highlighted why he is the most successful rider at Circuito de Jerez with one of the strongest races of his career to receive a standing ovation as he jumped onto the top step of the podium for the Gran Premio de EspaÌ±a for his 113th career victory.

Jorge Lorenzo also put in a stunning effort under the Andalusian sunshine and made it a perfect 1-2 for the Movistar Yamaha MotoGP team. Repsol Honda's Marc Marquez rounded out the podium.

The Movistar Yamaha MotoGP team dominated the scenes in Spain as Valentino Rossi and Jorge Lorenzo set off from first and second place of the grid. They didn't relinquish the first two places once to any other riders and gave Yamaha a perfect one-two podium.

Starting from pole the nine-time world champion had a strong start and took the holeshot with his team-mate following his every move like a shadow. Two laps of tense racing action followed as they pushed each other to the limit. Rossi tried to make his YZR-M1 as wide as possible as Lorenzo tried to steal the lead. He had a brief success, but Rossi immediately responded. Realising the threat that was coming from behind, the Doctor dropped the fastest lap of the race on lap three, a 1'40.090s, and created a 0.7s gap to his pursuers. With clear track in front of him and behind him, Rossi put the hammer down and checked out. 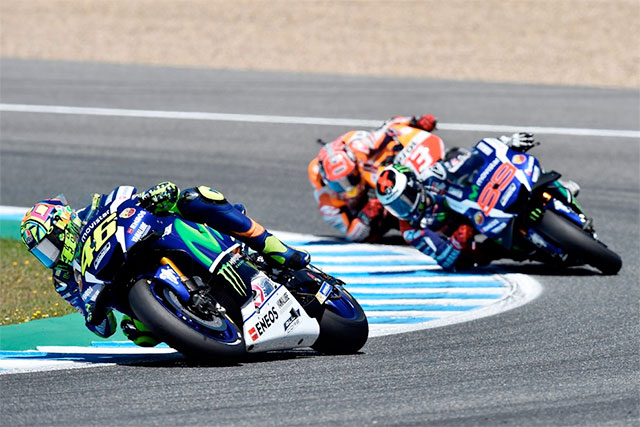 This is about as close as Lorenzo and Marquez got to Rossi.
Determined to look after his tyres, the Italian lowered his pace a little in the final stages of the race, yet made sure to keep enough space between him and Lorenzo by responding in the right moments. He finished his lonely ride by taking the chequered flag 2.386s ahead his closest rival and took home his 113th career victory.

"I think that this was the perfect weekend," Rossi said. "We started to go faster from Friday morning and we worked very well. The bike, in the race, was fantastic and we worked very well with the team so I have to say "thank you" to the whole Movistar Yamaha MotoGP team, especially my crew. I had a good pace and a good start and felt good with the bike from the beginning, so I could push. Sincerely, it was a special taste to have a win like this, so thanks a lot!" 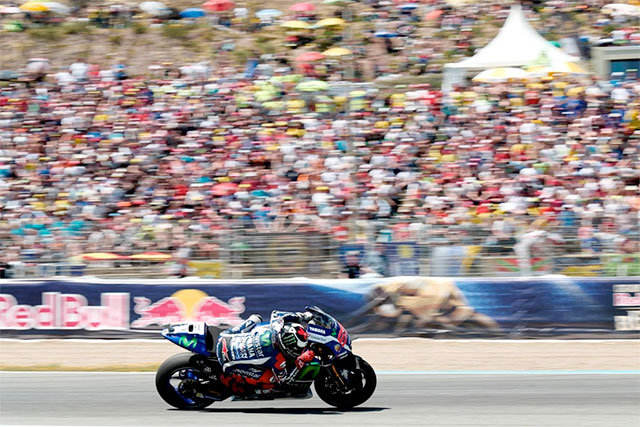 Tyre issues didn't help Lorenzo but he still carded a solid second
Teammate Jorge Lorenzo had a strong start and tucked in behind team-mate Rossi in second place. The local hero is known for being strong on the opening lap and built on the pressure on his fellow Movistar Yamaha MotoGP rider. He was eager to find a way past the number 46 rider after a few attempts that weren't to last, but soon he had to focus on protecting his second place from a fast approaching Marc Marquez.

However, the race was far from over. With 10 laps to go Lorenzo was able to turn the tables on Rossi and started to close down the margin. It looked like a second battle for the win was about to take place when suddenly the Spaniard suffered from wheel spin on the long straight just as he started to reel in his team-mate. Keeping his head cool, Lorenzo finished the race calmly and secured his 100th premier class podium. 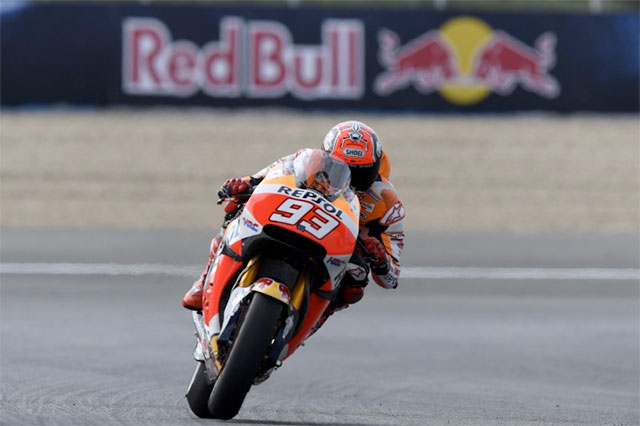 Marc Marquez had a go at Lorenzo early but then settled into third for the race distance
"The positive thing is that the Yamahas went better and also 20 points and second place is good for the championship," Lorenzo said after the race.

"Because Rossi crashed in Austin, he is still behind in the championship standings and we made up some points to Marquez. The only thing is that we could have won the race without the problem on the front-straight. Going through the gears the bike didn't stop spinning and I couldn't fully open the throttle. Just when I started recovering metres on Rossi this problem started, so I had to slow down a lot and I didn't have the chance to fight with him for the victory, but sometimes this happens," LOrenzo explained.

Still unhappy with the Michelin tyre situation the Spaniard added, "Now Michelin have to find out what is going on. They improved the front tyre and now I am sure they'll work on the rear to solve these kinds of issues."

Marc Marquez had no answer for the Yamaha's but his third still sees him with a 17 point championship lead.

‰ÛÏHonestly, today Valentino was on another level, like I was in Austin, and the most important thing is that today we accepted finishing third in the race," Marquez lamented.

"I learned a lot from last year and and I didn‰Ûªt want to make a mistake. I was very focused from the start and I tried to ride strongly and stay with Jorge, but I could tell that with the higher track temperatures - 11å¼ C higher than yesterday - it was very difficult for me to manage the front tyre well.

"I almost crashed several times, so in the end I made a difficult decision in front of our fans, as we preferred to secure 16 points that will be very positive at the end of the season, which is very long. We must have patience until we take a step further with the bike‰Ûªs acceleration and find something else that allows us to fight for the win," he concluded. 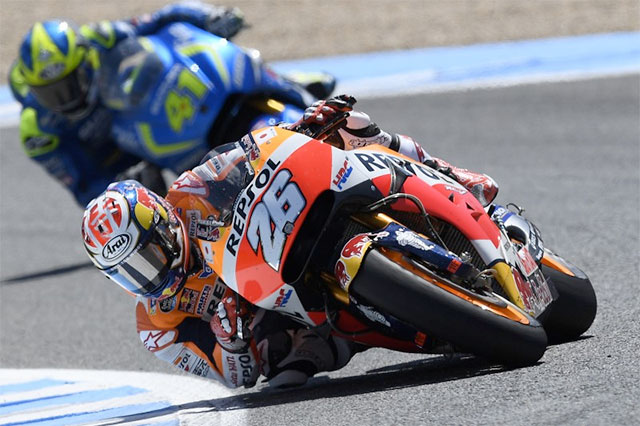 Daniel Pedrosa finished where he predicted he would - 4th
Dani Pedrosa had visions of a difficult race before the flag dropped and they proved to come true for the Spaniard.

‰ÛÏWe knew it would be a difficult race and we got the position we knew was possible, because the whole weekend the front three were faster than us. I started well, riding hard in the early laps. Then I saw I had difficulties with both the front and rear tyres," Pedrosa recounted.

"I concentrated on keeping my position and I rode at a safe pace so as not to make the rear tyre go off too much as well. I saw that Aleix [Espargaro] was recovering ground on me, but I had him under control and was only focusing on preserving the tyre. Near the end, when I didn‰Ûªt have him on me, I decided to pick up the pace again. I was able to escape and get closer to Marc [Marquez], so perhaps pushing so hard at the start cost him in the end. Tomorrow we have a test in which we will try to work and improve my feeling on the bike," he concluded. 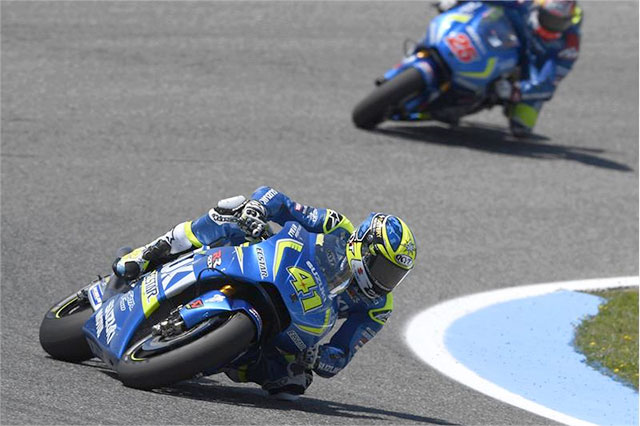 EspargarÌ_'s fifth equals his result at the previous race in Austin. His performance today also confirmed that he is finally finding his confidence back with the GSX-RR and the development work done so far has been effective.

‰ÛÏI was very focused on the grid and I made a good jump, recovering immediately one position in the first corner and then another one right away," EspargarÌ_ recounted, "Then I tried to catch-up to fourth position and almost succeeded, but unfortunately towards the end of the race the rider in front of me could keep a faster pace and I settled for fifth. It‰Ûªs a good result, after a slow beginning to the season, but I‰Ûªm getting closer to the top with good results but, most-importantly, improving my feeling on the bike.‰Û 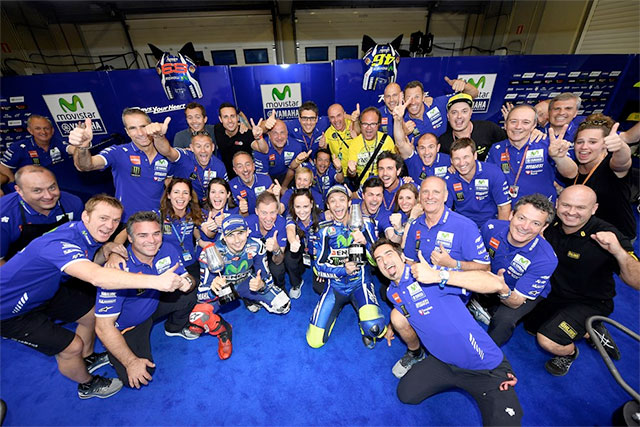 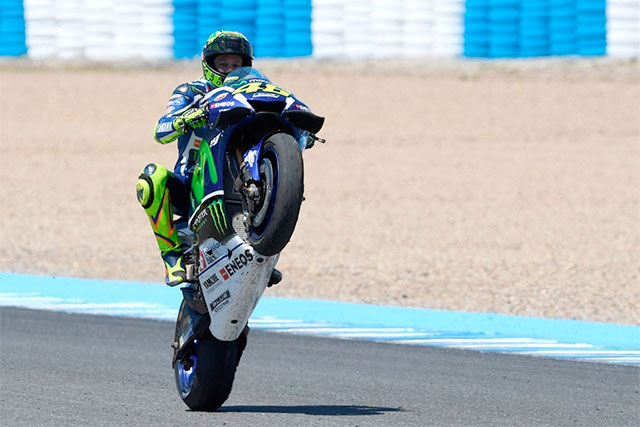