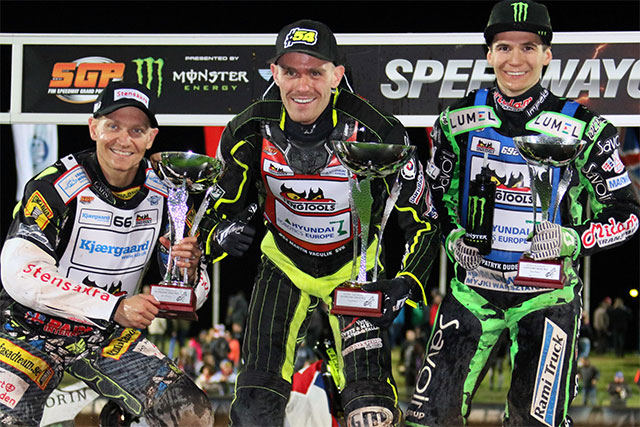 The Zarnovica-born star bounced back brilliantly from three years out of the World Championship, topping the rostrum ahead of Fredrik Lindgren and Patryk Dudek.

All three riders earned their places in the SGP series by packing the podium at last season‰Ûªs GP Challenge in Vetlanda and the qualifiers‰Ûª heroics in Slovenia underlined the strength of one of the greatest line-ups in the series‰Ûª history.

The trio now top the World Championship, with Lindgren leading the way and Vaculik second ‰ÛÒ both tied on 16 points. Dudek is third on 13.

Gorzow and Vetlanda man Vaculik was elated with his first SGP win since he triumphed at the Gorzow SGP on his World Championship debut in 2012, and he paid tribute to his loyal army of followers.

‰ÛÏI‰Ûªm very happy. What can I say?" Vaculik said. "I‰Ûªm very pleased with this result and I‰Ûªd like to say a big thank you to my tuner Ashley Holloway and my team ‰ÛÒ the guys did a tremendous job in Krsko and have done all season.

‰ÛÏI would like to say thank you to my family ‰ÛÒ they give me great support ‰ÛÒ and all my supporters and fans.

‰ÛÏWithout these people, it wouldn‰Ûªt be like this, so I am very happy and I‰Ûªm just enjoying the moment right now.

‰ÛÏI think gating was very, very important and if you made a good start, you had a big chance to win the heats. That was the key to success.‰Û