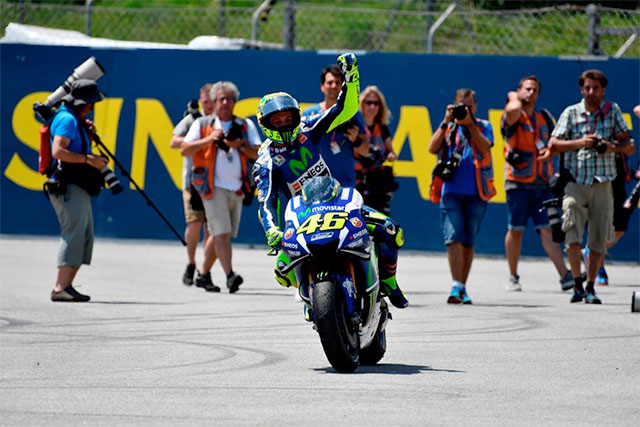 Movistar Yamaha MotoGP's Valentino Rossi charged to an impeccable victory at the Circuito de Barcelona-Catalunya, taking his second win of the season at the Gran Premi Monster Energy de Catalunya.

In a dramatic moment Championship leader Jorge Lorenzo was taken out by Andrea Iannone which gave extra importance to the finishing positions with huge gaps to be made.

Starting from fifth on the grid Rossi had his work cut out for him as he dropped back to eighth when exiting the first corner. The Doctor immediately put his nimble YZR-M1 to work and carved his way through the pack like a knife through butter.

By the end of the first lap he had overtaken Hector Barbera and Andrea Dovizioso. Riding in sixth place as he crossed the line for the first time, Rossi moved on to his next targets, Maverick ViÌ±ales and Andrea Iannone. He overtook the both of them with a great manoeuvre and quickly passed Dani Pedrosa to earn a spot in the top three with still 22 laps remaining to reel in the front riders.

As he pursued Marc Marquez, the Italian quickened his pace setting a fastest lap of the race so far. He soon reached the back of his rival's bike and smoothly passed the Spaniard on lap six and swiftly moved on to pass his teammate to take over the lead on the very next lap. Now with a clear track in front of him, he put the hammer down, but he was unable to shake off Marquez, who was riding in second place. 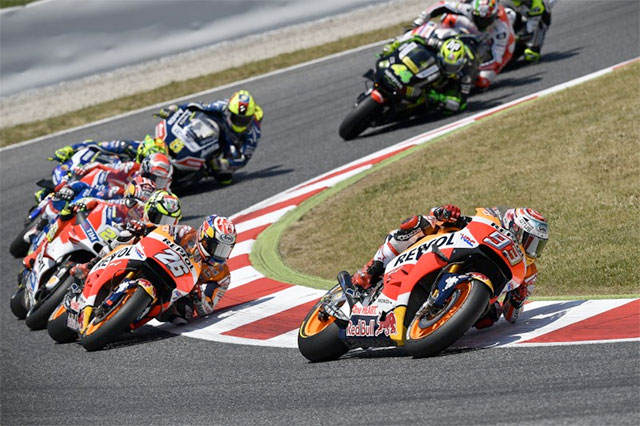 Marc Marquez leads a close field in the early stages
The end of the race saw a brilliant fight between the two key protagonists. The local rider made a move in turn five, but Rossi was quick to respond with a brilliant move in turn two a lap later. Marquez used the slipstream to find a way through again, but Rossi fought back. With two laps to go the Italian was in Marquez' slipstream and needed no second invitation when the Spaniard left a gap on the penultimate lap in turn seven, allowing Rossi to make the race-winning pass. Marquez was unable to make up the lost time, while Rossi rode towards his second victory of the season, holding a 2.652s margin over the finish line.

Rossi's first place earns him 25 points. This result keeps him in third place in the championship standings on 103 points, now just 12 points behind Lorenzo in second position.

"I think it was a perfect Sunday, because this morning we improved the setting of the bike a lot and after the warm-up I felt more confident about the race. The race was great," Rossi said.

"Though the start was not fantastic, I was strong enough to come back, do some good overtaking and arrive in front. From that moment I tried to push at 100 percent to go away alone, but unfortunately I wasn't fast enough to pull away from Marquez. I tried to stay quiet and ride well, because I felt I had a good pace and felt good with the bike.

"At the end I was ready for the battle, which was a good one, with a lot of overtaking and I was ready to give it a try. You can't wish for a better race, I think. This is one of my favourite tracks and it was from 2009 that I didn't win here, and that wasn't great for me. For this reason I'm more happy today and the battle with Marquez we can put on the same level as the battle with Lorenzo.

"What happened in Mugello was very sad because I was ready to fight for the victory there, which was fantastic. Over the last week I just thought I had to try do the same, to arrive ready for the race. Together with my team we did a great job and I think this is the best way to forget about the zero points in Mugello." 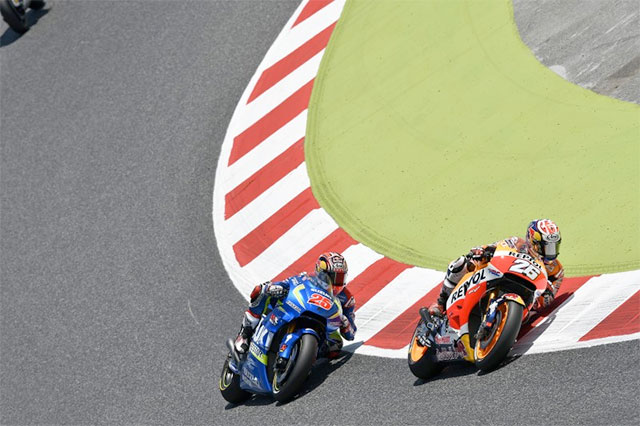 Dani Pedrosa fought hard with Maverick Vinales for a while but Pedrosa got the upper hand and took the last spot on the podium
The Repsol Honda duo of Marc Marquez and Dani Pedrosa both finished on the podium with second and third respectivly.

Marquez, who today reversed his race number to the ‰ÛÏ39‰Û 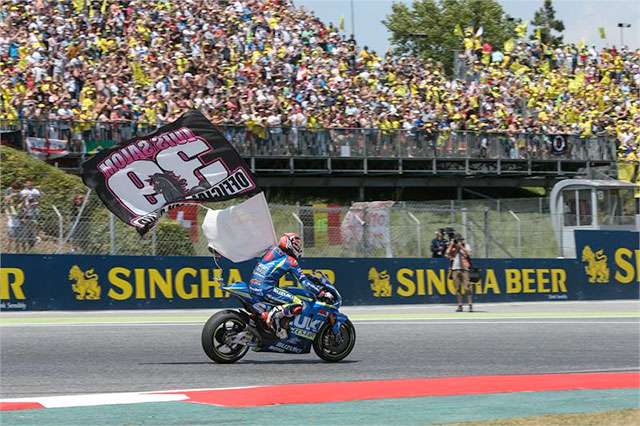 Maverick Vinales carried the number of Luis Salom after the race as a mark of respect
He soon overtook Iannone but was passed by Rossi, who was charging from the back. Dani was then involved in a tough duel for fourth with Maverick ViÌ±ales, and by the time he got the better of that and then passed Lorenzo for third, he had already lost close contact with Rossi and Marc at the front. Tough he was able to keep a very fast pace, he couldn‰Ûªt close the gap with the front pair.

‰ÛÏThis has been a positive race. We opted for the intermediate rear tyre because I felt more comfortable with it," Pedrosa said.

"On the first few laps I tried not to wear it down too much so as to keep it in good condition for the final stretch of the race. In the fight with Maverick ViÌ±ales I lost contact with the front group, but I managed to set a good pace and push a little more.

"In the final laps, the rear tyre had degraded quite a lot and there was nothing more that I could do. I‰Ûªm happy to get back at the front and return to the podium, and to do so at home but on the other hand it‰Ûªs been a difficult weekend for what has happened. Luis‰Ûªs family wanted us to continue, and we gave our all for him and for them. The minute‰Ûªs silence, with all the riders and the whole MotoGP family, was really emotional.‰Û