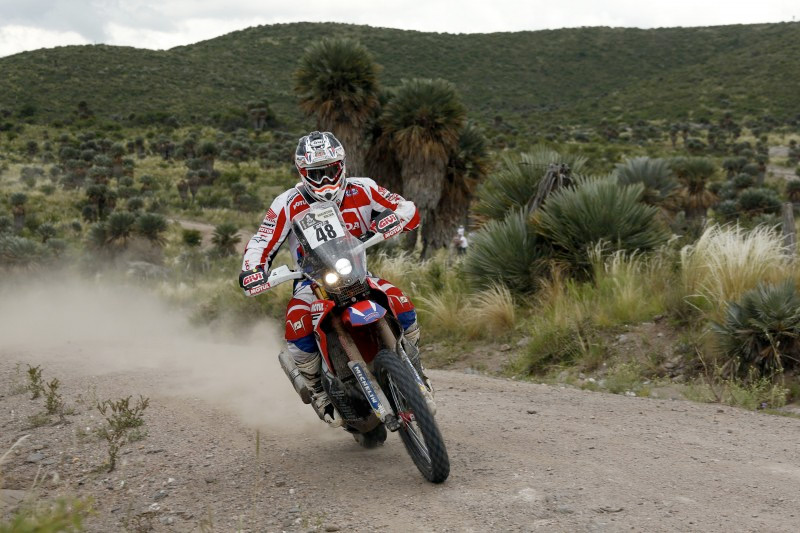 The Rally Dakar 2016 is over and Team HRC is packing up to go home with a score still remaining to be settled at the Dakar; one for which the team will go all out to achieve.

Now, the data has to be analysed and a year-long project planned, if the team is to capture rally‰Ûªs top prize next year. The team‰Ûªs endeavour to accomplish this mission in 2017 begins right away.

The two weeks of racing have ended in Team HRC‰Ûªs fourth year back in the event, but the entourage will come home disappointed after a bad run of luck put an end to what had appeared to be a promising opening week. The team returns empty-handed, but more resolved than ever to take top honours next time round.

The 2016 edition has been particularly tough on the squad, losing one of the main riders before the rest day and another after having led the rally for three consecutive days. Yet, even after such setbacks, the never-say-die Team HRC attitude prevailed with Dakar rookie Ricky Brabec displaying great promise on his debut. The 24 year old Californian finished ninth overall in addition to having finished runner-up in stage nine.

Paolo Ceci played an important role for the team, coming to the aid of both Paulo GonÌ¤alves and Joan Barreda on separate occasions when they ran into trouble. Paulo had clinched two stage wins, while Joan had won the prologue and would have won the first two stages too, were it not for time penalties incurred for speeding.

A special mention goes out to Team HRC‰Ûªs great collaborator Honda South America Rally Team, who not only scored a stage victory, but also managed to consistently finish among the rally‰Ûªs front-runners. Argentinean rookie Kevin Benavides rode to a noteworthy and well-deserved fourth place overall. A bright future beckons for this brilliant young rider.

Frenchman Adrien Metge, also on his maiden Dakar outing, finished the challenge in eleventh overall position. Jean Azevedo and Javier Pizzolito were both forced to retire after heavy falls. Team HRC wishes to express its gratitude to all the sponsors and collaborators who have so loyally supported the team through thick and thin. Many thanks also to all the fans who have offered very active support on social media.

Now, all that remains is for the team management to analyse and evaluate what has occurred during the Dakar 2016.

"This leaves us some homework to do in order to come back better next year. Anyway, apart from that, I think we had a good time and were leading the race at the halfway-point and we are especially happy to see the development of the young riders. It was, for sure, the year of the rookies.

"In the top fifteen positions there are many new riders coming up and we are especially happy to see the Argentinean talent Kevin Benavides in fourth position. We are pleased to see that our new guy Ricky Brabec, from the USA, made it into the top ten. Also, from Honda South America, Adrien Metge was not far behind.

"This gives us a lot of motivation to work with these guys in the future and come back even stronger and try to finish the mission.

"First of all, I would like to thank the whole of Team HRC: riders, mechanics, technical crew and all the other team members for their work and efforts throughout the season that has finished with this 2016 edition of the Dakar Rally." Team HRC Rally Project Leader Taichi Honda added.

"Likewise, thanks also to all the Honda fans who have supported us during the race.

"The Dakar has finished. It has been a hard race for us, we have had some good results, some stage victories, some promising results from the youngest riders of both Team HRC and Honda South America Rally Team, plus other results that will make our next participation all the more effective. We will improve the bike and we will come back and battle to get a win in the next Dakar."