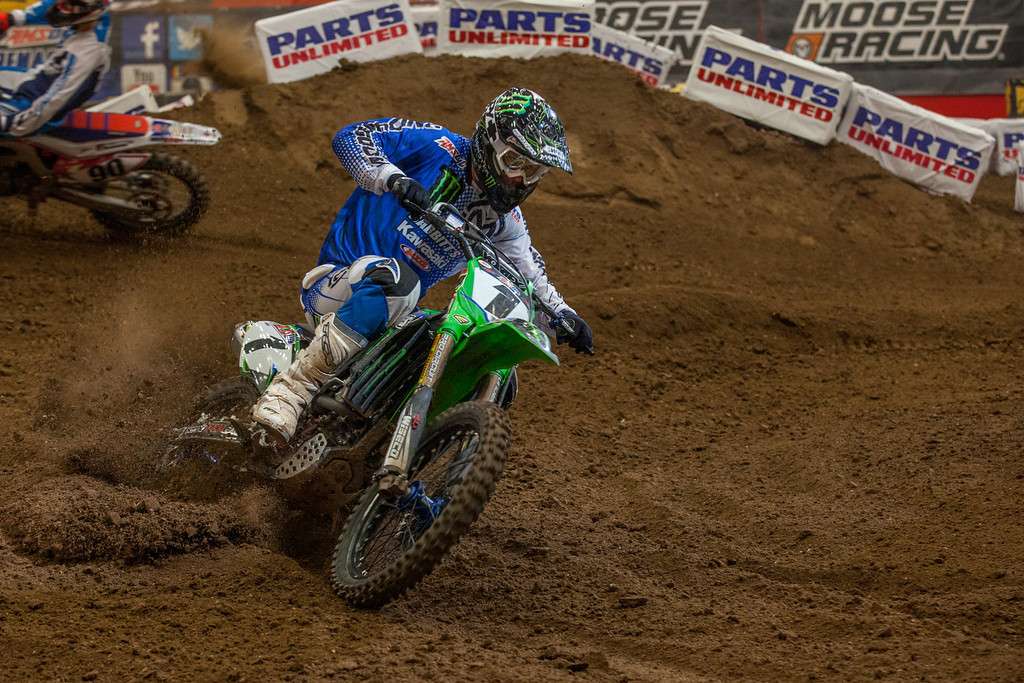 With just three races remaining in the Race to the Championship, the drama on the track intensified with Babbitt‰Ûªs Monster Energy/AMSOIL Kawasaki presented by Maxxis rider Tyler Bowers sweeping the Arenacross Class Main Events to capture his ninth overall victory of the season and take over the points lead.

Bowers began the first Arenacross Class Main Event of the night by grabbing the early lead with the PBR/TiLube/TUF Racing Honda duo of Jacob Hayes and Kyle Regal in tow. Bowers and Hayes opened a slight gap over Regal, which allowed Hayes to make a pass for the lead on Lap 5, successfully edging out Bowers at the line, but losing the spot just a short time later.

Although he was tested early on, Bowers never faltered once back in the lead and took the win over Hayes, with Regal in third. Race to the Championship leader Zach Ames endured a challenging beginning aboard his Babbitt‰Ûªs Monster Energy/AMSOIL Kawasaki machine.

Ames was forced to transfer into the Main Event through the Last Chance Qualifer, started the Main Event in 11th, and was only able to fight his way to a ninth-place finish.

Bowers selected the inversion for the second Main Event, picking eight and inverting half of the field.

Out of the gate for the second Main Event, it was Bowers once again assuming the early lead with Hayes and Regal on his rear fender. This time, Ames got a better start and slotted himself into fourth. Just like the first Main Event, Bowers and Hayes ran close the entire race.

The pair swapped quick lap times throughout, but Hayes was unable to mount a challenge. Bowers took the checkered flag nearly a second ahead of Hayes, while Regal was able to maintain possession of third for the entire Main Event. Ames followed in fourth.

Bowers‰Ûª fourth 1-1 sweep of the season easily earned him the overall after leading 29 of 30 Main Event laps. Hayes finished second (2-2), while Regal put both TUF Honda riders on the overall podium in third (3-3). Ames‰Ûª 9-4 results landed him sixth overall.

Earlier in the evening, Hayes earned an additional championship bonus point by edging out Bowers in Head-to-Head Bracket Racing.

With Bowers‰Ûª ninth win of the season, he overcame a three-point deficit to Ames in the Race to the Championship and now carries a nine-point lead over his teammate into the second night of action. Hayes‰Ûª additional bonus points in the Head-to-Head Bracket Racing also helped moved him into a tie with Ames for second, which Ames currently holds by virtue of better finishes this season.

Blair opened the Western Regional Arenacross Lites Class Main Event by edging out Team Faith/FLY Racing KTM‰Ûªs Kelly Smith, who was in search of his fourth consecutive victory. The duo established a blistering pace in the opening portion of the 18-lap Main Event, which allowed them to comfortably battle out front for the lead, while TJ‰Ûªs KTM rider Tyler Livesay asserted himself into podium position in third.

On Lap 8, TZR/Woodstock KTM‰Ûªs Josh Struebig crashed, which brought out a red flag and halted the race.

The field lined up single file for a restart and when racing resumed, Blair and Smith again opened a gap on their competitors. AJ Oilfield Services Kawasaki‰Ûªs Gray Davenport slipped past Livesay for third to cement his spot on the podium. Smith pressured Blair throughout the remainder of the race, with mere tenths of a second separating the two, but Blair held on to win by just under a second. Davenport followed in third.

The inaugural Hidalgo stop of AMSOIL Arenacross continues tomorrow with a second night of action inside State Farm Arena.