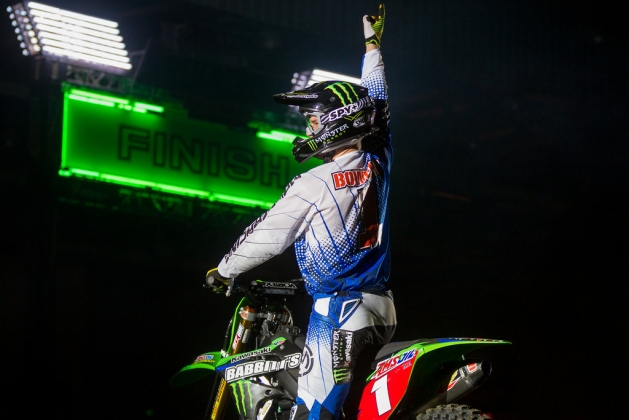 The final round of the 2014 AMSOIL Arenacross, featuring Ricky Carmichael‰Ûªs Road to Supercross, season brought an action-filled night of competition to EnergySolutions Arena on Saturday as a pair of champions were crowned.

Entering the evening with a comfortable lead in the Race to the Championship, Babbitt‰Ûªs Monster Energy/AMSOIL Kawasaki presented by Maxxis rider Tyler Bowers swept the Arenacross Class Main Events to grab his 11th overall win of the season and become just the third rider in AMSOIL Arenacross history to win four consecutive championships.

Motosport Hillsboro Kawasaki‰Ûªs Gared Steinke raced to the holeshot in the first 15-lap Arenacross Class Main Event, with PBR/TiLube/TUF Racing Honda‰Ûªs Jacob Hayes and Bowers in tow. Bowers made a quick move for second and proceeded to take over the lead on Lap 2 from Steinke. A minor bobble by Hayes dropped him to fifth and allowed Foremost Insurance/Reynard Mods Suzuki‰Ûªs Cory Green and Babbitt‰Ûªs Monster Energy/AMSOIL Kawasaki‰Ûªs Zach Ames to assume the battle for the final podium spot.

Ames stalled his bike on Lap 3, dropping to 13th, which moved Hayes back into the podium fight with Green. Hayes made the pass on Green for third on Lap 9 and then put the pressure on Steinke in second. Out front, Bowers cruised to a dominant win while Steinke held off Hayes for second. Ames fought back to finish eighth.

Bowers selected the inversion for the second Main Event and chose zero, meaning the field would remain as is for gate selection.

PBR/TiLube/TUF Racing Honda‰Ûªs Kyle Regal grabbed the holeshot in the final Main Event of the 2014 season, but Bowers‰Ûª prowess in the whoops on Saturday night allowed him to move into second on the opening lap and then into the lead on Lap 2.

While Bowers set sail to the title out front, Ames had to battle his way from a start just outside the top five while Hayes started the Main Event in dead last. Bowers went unchallenged en route to victory, with Ames battling his way to a runner-up finish. Regal finished third, while his teammate Hayes climbed to a sixth-place finish in the end.

Bowers was joined on the overall podium by Steinke in second (2-4) and Regal in third (4-3).

Bowers entered the night with an 18-point lead and finished the season off with a 25-point margin over Hayes. It wasn‰Ûªt an easy path to the title for Bowers in 2014, suffering a broken tibia at the opening round of the season and racing through the pain to keep himself in title contention.

‰ÛÏIt‰Ûªs been a crazy year, getting injured at first round and having to fight through adversity pretty much all season,‰Û