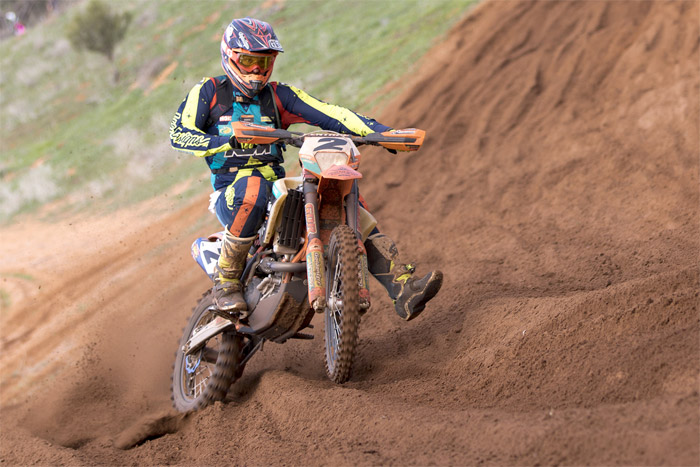 KTM Off Road Racing Team riders Tye Simmonds and Daniel Sanders gave KTM Australia the coveted Finke/Hattah double for the third straight year as they powered to an exciting 1-2 in this year's Hattah Desert race near Mildura Today.

Just three weeks after Toby Price claimed the first of the country's big winter desert races ‰ÛÒ the Finke - Finke runner-up Simmonds and AORC championship leader Sanders fought out an intense battle for supremacy for the second, exchanging the lead approximately 10 times during the third and fourth laps of the rugged four-hour desert epic before Simmonds was able to break clear.

‰ÛÏI hit a tree on my last lap and my hands are pretty torn up but I‰Ûªm over the moon." Simmonds stated at the conclusion of the 4 hour race. "It was a hard one today; I definitely worked for every minute of the four hours, but it‰Ûªs definitely the biggest one I've achieved so far.

"It was on all day with Chucky, I had a bit of a game plan and by the fourth lap I realised it wasn't going to work. I wanted to try and outrun him and get out of there, but we probably swapped for the lead 8 to 10 times over two laps.

"The first time he passed me he was screaming his head off, I sort of got a bit of a kick out of that, it was funny! But to have that many good clean passes, it was good racing, and for it to come down to the wire that close, it was an awesome finish for us two boys and the team. But then I nearly had mishap and he did have one, and I managed to scoot away. It wasn't a big win, but 12 seconds, we‰Ûªll take it.‰Û 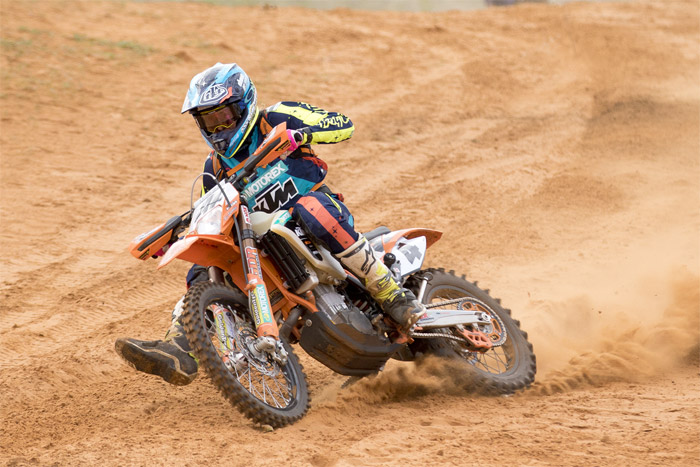 Daniel Sanders overcame a lap two crash to closed to within 12 seconds of Simmonds at the Finish line - Credit: John Pearson
Switching from his regular KTM 300 two-stroke to one of the team's mighty 500EXC desert weapons, Sanders took the early advantage as he qualified fastest, earning the right to lead the field out onto the track today, but when he took a tumble while battling over the lead with Simmonds late on the fourth lap, his team mate was able to open a gap that Sanders could not fully close.

‰ÛÏI got the win at Prologue and it was good to take off first; that was a good experience. Tye blew past me a couple of minutes in, and I sat on him for a couple of laps. As soon as the lappers came into play on the third lap, we passed each other about 10 times, it was sick." Said the ever excited Sanders.

"I had good fun with him, it was pretty funny, he'd get screwed up by a lapper and I'd come past him, giggling. Then on the fourth lap he had a big moment and just saved it and then I hit the same thing after him and cartwheeled and lost him.

"I still had a bent front end on the fifth and sixth lap and I couldn't get my head around it, but I pulled the gap down in the last two laps and got down to 12 seconds, so it sort of my fault I lost it. But that's racing, and it was a good experience and good fun out there. The whole team did good. The 500 was amazing, we pulled away from third place to we were 11 minutes clear.

"I‰Ûªm happy for Tye, and 1,2 is pretty good, it's just unfortunate that Triggy had a little problem and lost his position or we would have had a 1, 2, 3. It was a good race, and good for the crowd too, I'm pretty sure everyone enjoyed it.‰Û 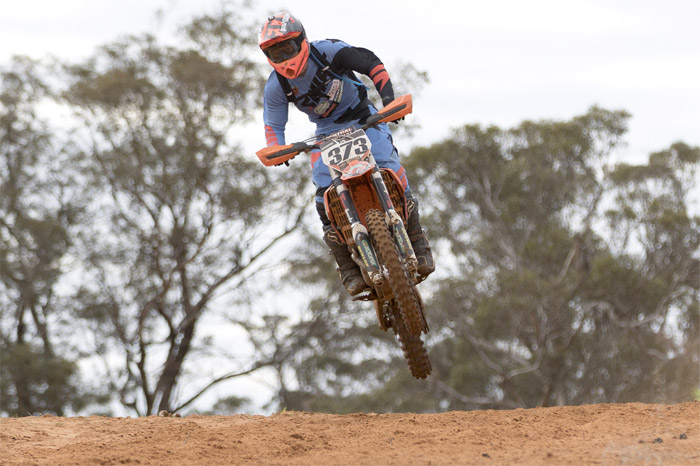 Jack Simpson on his way to a class win and top ten outright at this years Hattah Desert Race - Credit: John Pearson
KTM Australia backed Jack Simpson continued his great debut season in the Off-Road ranks taking the class win in the up-to 250 Four-Stroke class on his way to finishing 10th outright. Mark Grove cross the line in second position while Riley Graham who raced the opening two laps with now front brake after damaging his lever and master cylinder in the opening lap fought back late in the race to take the final step on the rostrum.

‰ÛÏFour hours is a long time." Simpson commented after his first Hattah event as a senior rider. "I‰Ûªm stoked, I‰Ûªve only done Hattah as a junior on a completely different track back, so you could almost say I've never done it before.

"I had a good time, on the little bike I was battling with Walshy and Damon Stokie who are big names in the desert, so that‰Ûªs pretty good. It's the same bike and engine that I raced at Finke, just with a top-end freshen up after Finke, she‰Ûªs a beast!

"The start was pretty intense, I had a couple of 500s go hooking past me like I was standing still, which was expected. Now I know what I need for with both Finke and Hattah, I just want to come back on a big bike and put it up the pointy end.‰Û 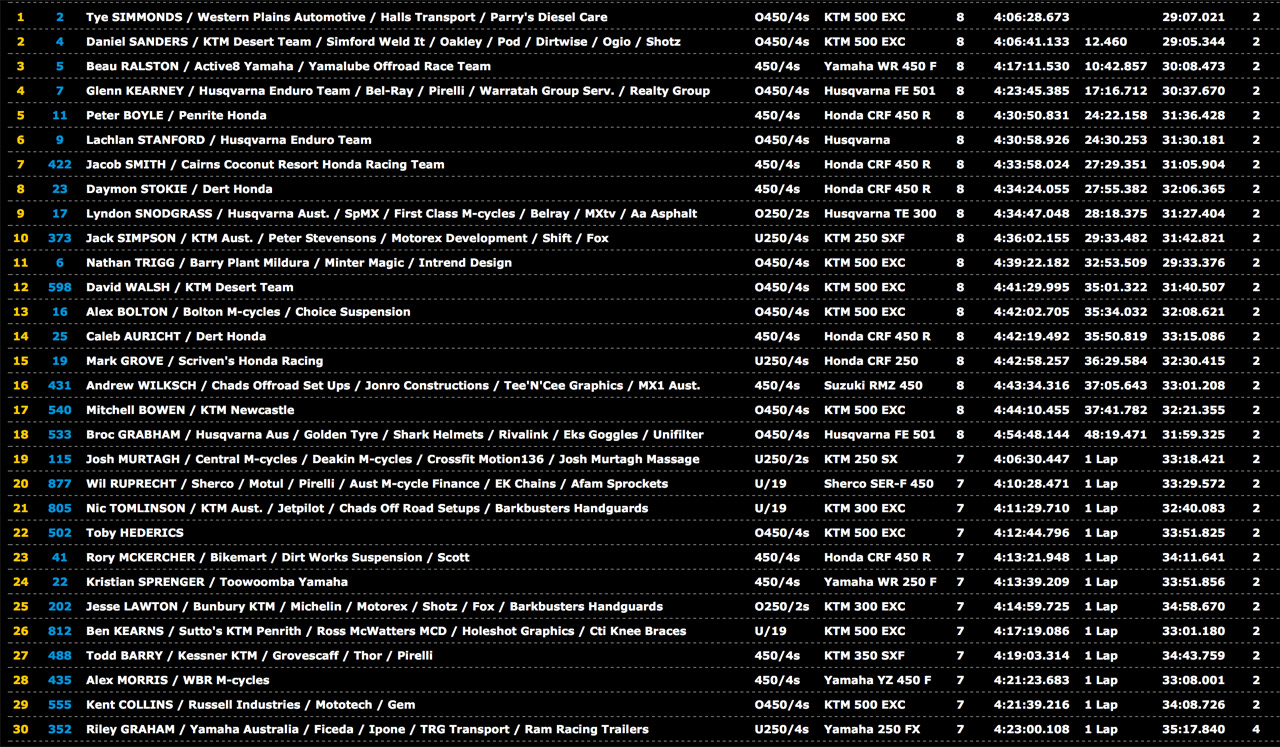