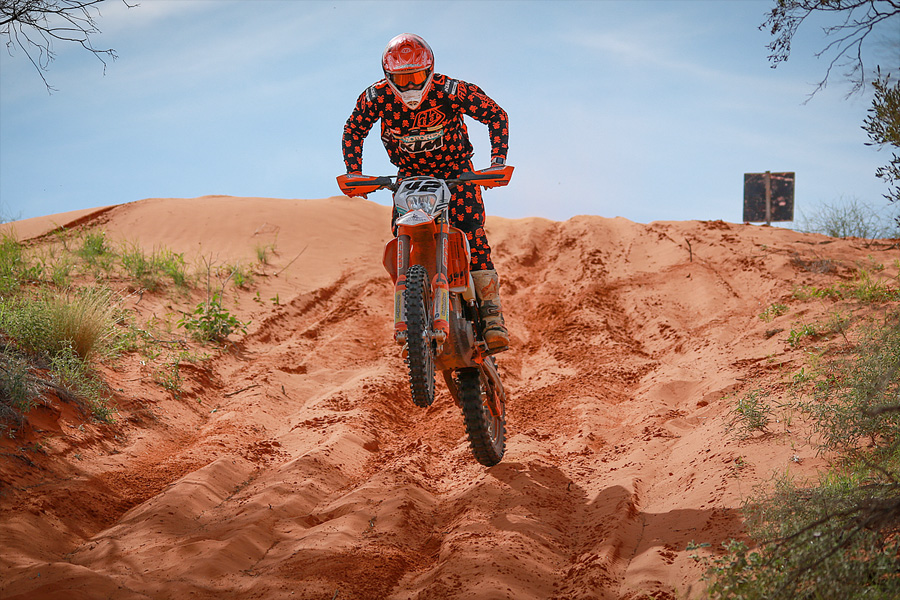 KTM Off-Road Racing Team rider Tye Simmonds has opened his 2016 account by taking victory in what is possibly the hottest and hardest motocross race in the world, the annual Deep Well motocross, south of Alice Springs in the Northern Territory.

The event is famous for subjecting its competitors to some of the toughest motocross racing conditions known to man, with three 35-40 minute motos, largely in heavy sand, and in temperatures which regularly approach 50 degrees.

Just three weeks back into serious preparation for this year's racing calendar, Simmonds reminded competitors why he is widely regarded as one of the most naturally talented and toughest riders on the circuit, powering to three race wins from three starts to successfully defend last year‰Ûªs title from Damon Stokie and Jack Dooley-McDonnell.

Simmonds rode the very same KTM 500 EX-C he used to finish Vice Champion in the 2015 Finke Desert Race, and put the machine‰Ûªs exquisite combination of sheer grunt and great handling to good use with a perfect three from three holeshots on the day.

‰ÛÏWe were pretty lucky again with the weather, I think it was only 36 or 38 out there, not 40 or 45 degrees like it normally is!" Simmonds exclaimed.

"The big 500 she was on fire all day today. I felt pretty good, my fitness is coming along; we did three 30 minute motos for the day. The Honda boys kept me really honest in the first one, but in the second one I got a little bit of breathing room, then in the third one I got another holeshot, put down two really hard laps and got a fairly decent lead and got through with the win fairly easy.

"We‰Ûªre three weeks back into training so starting to feel good. The first week at the gym was a bit hard but were already starting to make a bit of progress. We‰Ûªre already in a better place than they were last year, and it‰Ûªs good to start the year with wins. We had a few Hondas in tow today, and that‰Ûªs where we want to keep them - with the KTMs out front!‰Û