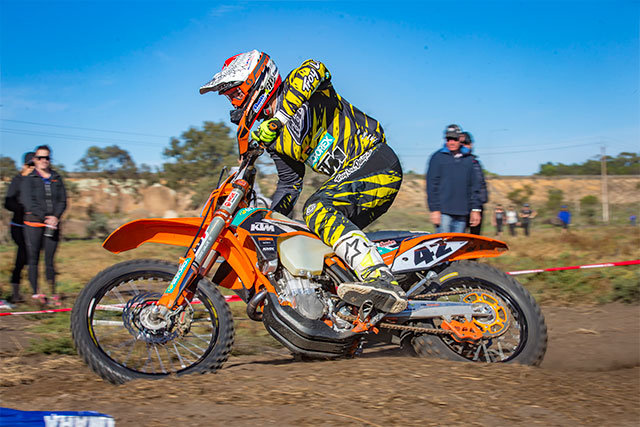 Today marked the half way point in the championship season and with six tests to get the job done, the seven senior classes went head to head to chase the top spot on the podium, competing on a grass, sprint format track.

KTM mounted Jack Simpson took off from the start line this morning, taking his confidence from yesterday‰Ûªs class win to push his bike to the test. Simpson once again was able to launch his bike in front of second place Husqvarna Enduro Racing Team‰Ûªs Glenn Kearney to round out the podium with the Round 6, E1 win finishing with a 42:25.601 time.

Kearney (42:37.267) second, was followed close behind by Scott Keegan (43:03.744) who slipped just off the times from this mornings test to conclude on the third step of the podium.

It was a spectacle on track today as Round 5 winner, CDR Yamaha‰Ûªs Chris Hollis went up against KTM Enduro Racing Team Rider Tye Simmonds to attempt to defend his winning streak from yesterday. However, KTM mounted Simmonds was unstoppable from the get go this morning taking the outright top spot on the time sheets and remained consistent through out the day. Simmonds was victorious taking the Round 6, E2 class win and the outright fastest time for the day with a 41:43.692, marking his AORC career best achievement to date.

Hollis putting in a strong fight after recovering from his crash in the last test yesterday, was only seconds behind Simmonds with a concluding time of 42:16.959. CDR Yamaha‰Ûªs Tom McCormack joined both Simmonds and Hollis on the podium in third with a finishing time of 42:51.581.

After achieving his AORC career best result for the 2016 season the elated Simmonds spoke about topping the times and his struggles out on the grass track today.

‰ÛÏI am feeling really good after the results today. I knew as soon as we got to this type of event, where it was a bit more open with room to move I knew I was going to be where I should results wise,‰Û