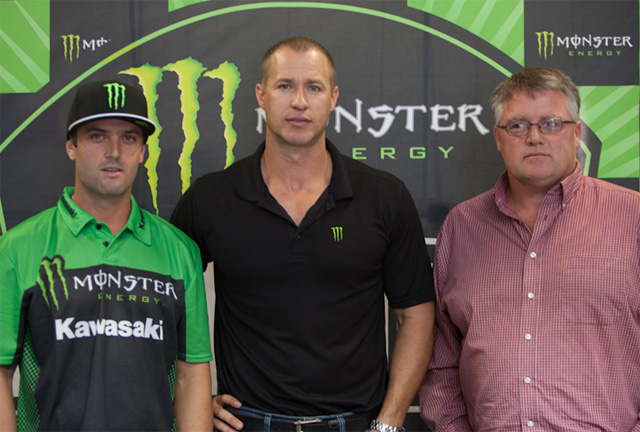 Welcome to Tuesday's Track Talk, a new weekly feature where we take a less formal look at the week in the off road world, a place to speak about the rumors and gossip around all off road disciplines and to have a look at some of the topics that did not get the coverage throughout the week for one reason or another and also topics that were covered that we thought needed a quick revisit.

With just under two weeks before the start of what is promising to be an exciting year of racing on our home front the talk around the message boards and social media is starting to light up on who will win, who is in form, who is carrying an injury and who may not be racing!

The Monster Energy Motocross Nationals looks to have a lot of new initiatives for 2012 with one of the most exciting being the new live timing system from Tag Heuer. Timing system may be a bit of an understatement though, with the new system being used not just for timing but also as the base for riders and teams to enter each round of racing and providing the opportunity for teams and riders to place as much information as possible about themselves.

This information can then be viewed by punters at home and at the track to view their favorite rider's progress throughout the days racing. Add to that the option to follow your favorite rider live via Facebook with race progress and we could be seeing the most advanced timing system in the world being used at the Nationals.

Other news announced by Championship promoter Kevin Williams at the launch of the 2012 season included a new naming rights series sponsor in Monster Energy, who are looking to help to grow the sport in Australia and help take it to another level, from what Monster Energy's Australasian manager, Adrian Hunter, had to say at the Launch, the 2012 season is well on track to have some great ideas put in place and make that growth happen.

Sound company Skullcandy have jumped on board to provide a new sound experience at the races, providing a FM station at all rounds so everyone at or in the vicinity of the track will be able to tune in and listen to the commentary. Also LKI (Loose Kid Industries) have signed up as official clothing provider for the MX Nationals, we should see some of the sweetest dressed race personnel in the world.

One of the biggest rumors in Australian MX started to break late last week and through the weekend with the announcement that came from the final round of the New Zealand Championship. Ben Townley may be heading to Chad Reed's Two Two Motorsports team for the AMA Nationals, and may or may not be riding selected rounds here in Australia. We have been chasing hard trying to get confirmation if this is true, all indications are that something is definitely in the works and was mentioned on the podium at the New Zealand championship by BT himslef but time will tell if it comes to light or not.

News Just in, BT Confirmed to be joining Two Two motorsports for the AMA Nationals. 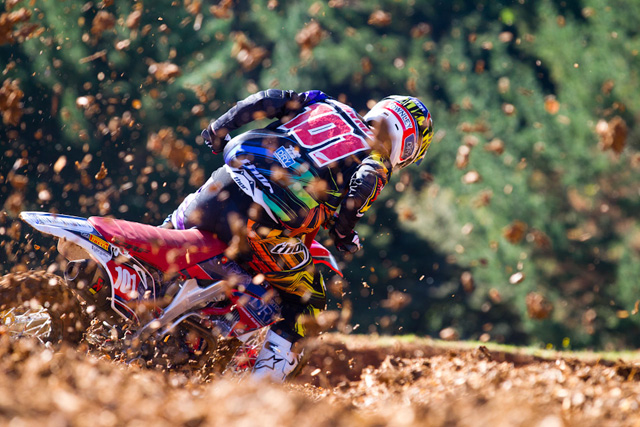 Photo:Ben Townley Confirmed to be riding for Chad Reed's Two Two outfit. - Photo Credit: Rice Photography
If BT101 does leave the Australian series before it starts does this take away from the series? or really open up the series to more riders in terms of championship hopes? I am torn both ways on what I would like to personally see, the selfish side of me wants to see Townley live in action at each round, but what I would truly like to see is BT battling for race wins and the Championship in America, there is no doubt in my mind he has the ability to win races again in the AMA series.

The other big question is now, does someone else step into Townley's ride if he is leaving and if so who, Tye Simmonds and Jake Moss have been mentioned as they are both now riding Honda's but with both of them just setting up their own programs with their own sponsors will this be possible ? If not who else in Australia is available? does the team look overseas or run with Brad Anderson only.

We also learned on Monday morning the Cody Mackie will not contest the 2012 MX Nationals, It looks as though he will be joining a couple of other well know Australian riders on the set of a well know movie series that is about to make a return to the big screen, it makes us a little MAD to see he won't be there, but whatever he is doing I am sure he is doing it to the MAX!!!

This past weekend also seen the opening round of the Victorian State Motocross titles, and the rider line up was not far away from a full National line up, with some of the big contenders from the newly named MX1 class (old open class) the MX2 class (former Lites class) and the MXD class (under19s) lining up to see where there form was at heading into Conondale. 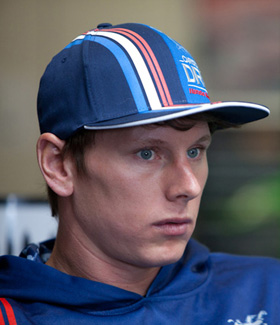 Photo: Brad Anderson started his Australian championship hunt with a Victory in the Victorian State titles. - Photo Credit: Garry Morrow
New British import Brad Anderson lead the way on Saturday winning all before him and stamping his name as a true contender for the MX1 title at the end of August. Behind Anderson came two other Championship contenders in Todd Waters who will line up with Suzuki in the MX1 class and Kirk Gibbs who will line up again with Serco Yoshimura Yamaha in the MX2 class again in 2012. Both riders tied on 82 points for the day, It would have been interesting to add Gibbs to the MX1 line up in the already stacked field in 2012, hopefully it is something we will see next year.

Sunday seen the A grade Lites riders line up, with rider of the like of Ford Dale, Kirk Gibbs, Todd Waters, Luke Arbon, Joel Milesevic and Veteran rider Cheyne Boyd lining up on the gate. At the end of the day it was Cheyne Boyd who is riding the 250F at the nationals this year who took the win ahead of Ford Dale and the rider who is doing everything right pre season Milesevic, who also just happened to win the under19s over the weekend. Boyd proved he could be a real threat stepping back to the smaller bike this year.

Gibbs did not have such a great day on the Sunday in the Lites class, After winning in his opening race he crashed hard at the start of the second race, he was able to get up but missed the rest of the days racing, He does have an injured wrist and has had some scans on it Monday morning and is waiting to hear back, at this stage he is still looking good to for round one at Conondale.

Speaking of Injuries, Australia's sole rider in the Motocross world championship Dean Ferris is continuing to recover after elbow surgery caused by a pre season crash, I have spoken to Ferris, and recovery is going well , though at this point in time he may miss the start of the MX1 championship. Dean is a little bummed sitting on the sidelines watching the rest of the Euro based riders getting ready for round one at the many preseason races going on throughout out Italy, Holland and Great Britain. The world MX Championship is shaping up to be another cracker of a season with a lot of riders showing some great form, with the season starting over the Easter Weekend just a few short weeks away.

While on the topic of overseas Motocross, the New Zealand Championships have just wrapped up and were completely dominated by Ben Townley winning a 11 of 12 races, missing out on the perfect season after a fall in the first turn in one moto at the third round, though he did come from last to 2nd in that moto! The two other New Zealand riders who are definitely in Australia for the full MX Nationals series , Josh Coppins and Cody Cooper finished in second and third respectively, Cooper looks to have some form at the last round which is a good sign heading into the Aus season and Coppins says he is getting better all the time after shoulder surgery at the end of last season.

How about 43 year old Daryl King wrapping up the MX2 class, hard to believe there would have been riders in that class 24 years younger than him! Also good news is King will be in Australia to race the first couple of rounds of the nationals, one thing I am glad off is he is in the 40+ class in the vets and I don't have to be on the track with him!

Second in MX2 was Scott Columb (or Coolum late on Sunday nights!) Columb is currently seeking out a ride anywhere in the world for the rest of the year, would be good to see him over here racing.

Australian Brett Metcalfe scored his first Career race win in AMA Supercross by claiming the race win in his heat at Indianapolis, After a season where Metty has struggled at a few rounds and been off his usual pace, it was great to see him back where he belongs, he kept the ball rolling in the Main Event running as high as second before finishing in fourth, hopefully it is only a matter of time before we see him on the podium. 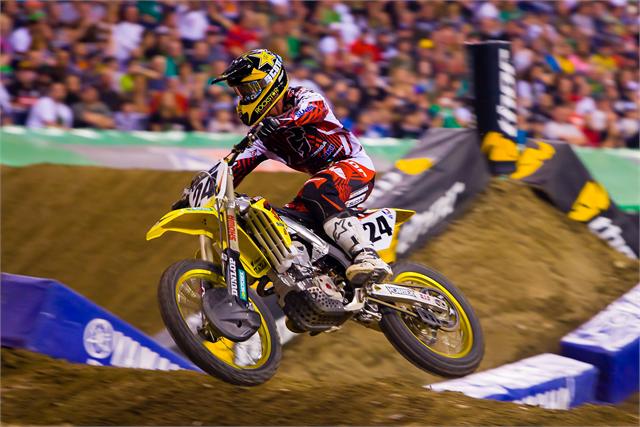 Photo: Brett Metcalfe race to a heat race win in Indy. - Photo Credit Suzuki-Racing
How about the Lites re start at Indy! A single file restart was used after a crash by Kyle Cunningham bought out the Red Flag, to be honest it looks to be a fair way to restart, a lot more fair on the lead riders than lining them all up and dropping the gates again.

Maybe with future technology advances we could see riders line back up behind their gate with the gates dropping at a staggered time difference, putting the riders back on track with the same time gap as they were at the red flag, though that could get interesting on tracks that cross back over the start gate area.

Another Australian running up front in the United States of America, is Husqvarna rider Glenn Kearney who was a last minute replacement for the US team, traveling between Australia and America has not seem to had an impact on his results with Podium results on both continents and currently running in 4th position only a couple of points off second place in the XC2 class at the GNCC.

Well that will do for our opening week, we will keep our ears to the ground and have the Facebook and Twitter pages wide open in the search for anything interesting, strange, confirmed or not so confirmed.