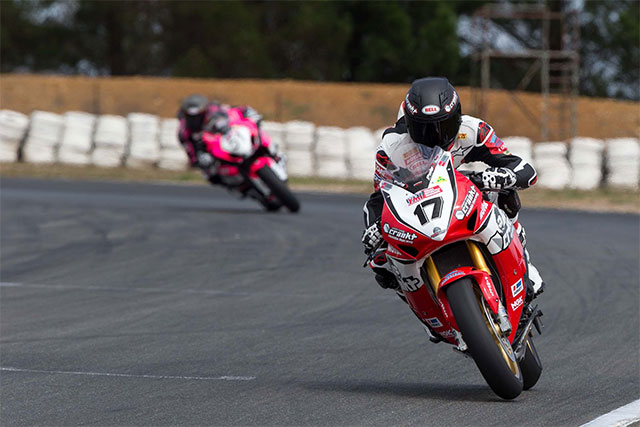 Round 2 of the 2016 Yamaha Motor Finance Australian Superbike Championship presented by Motul Pirelli, officially kicked off at Wakefield Park Raceway today, with bikes hitting the track for their practice sessions ahead of race commencement this Easter long weekend.

With six classes having the opportunity to lay down the rubber today, times were quick and competitive, giving spectators a taste of what is in store for round two.

The Yamaha Motorcycle Insurance Superbike category put the quick laps down during their first practice today - their first session of the morning run with patchy track conditions after rain fell on the Wakefield Park circuit.

With few competitors braving the varying conditions early on, it was Wayne Maxwell (Yamaha Racing Team) with the fastest practice session time of 1:02.617 this morning, followed by New Zealand rider Sloan Frost hot on his tail with a 1:02.737, while round one champ Glenn Allerton (Yamaha Racing Team) rounded out the top three with a 1:04.439 lap time.

With a dry track this afternoon, the Superbikes headed back out after lunch for their second practice for the day ‰ÛÒ and with a full grid out on track, there were a number of changes to the Superbike lap times. Local Troy Herfoss (Crankt Protien Honda Racing) just couldn‰Ûªt be beaten this afternoon, as his speed pushed him to the top of the times with a 58.215 lap. Yamaha‰Ûªs Allerton was hungry not to let his times slip, and was right behind Herfoss with 58.241 followed by YRT teammate Maxwell in a close third with a 58.575.

Despite a minor crash Herfoss proved his speed once again on his home track during the final Superbike practice this afternoon, managing to finish on top of the times with a circuit best 57.594. Herfoss wasn‰Ûªt without pressure, with the Yamaha trio coming close to the local‰Ûªs times ‰ÛÒMaxwell finishing second quickest (57.647), Allerton third (57.879) while teammate Cru Halliday wrapped up the day with the fourth quickest lap (58.317).

Rounding out the top five in the Superbikes was Jon Daniels Racing‰Ûªs Daniel Falzon with a 58.380, while Honda‰Ûªs fill in rider Ant West finished the practice sessions today strong in seventh position (58.813) just behind the DesmoSport Ducati mounted Mike Jones who finished in sixth (58.460).

With the rain subsiding and the track slowly drying this morning, the Motul Supersport class kick started their morning with a successful first practice session - Chris Quinn pulling his Yamaha R6 around the circuit with the fastest lap (1:15.273) followed by Sam Clarke (1:15.351) while Kawasaki mounted Callum Spriggs finished with the third fastest time of 1:15.963.

At the conclusion of the final session for the Motul Supersport class it was Luke Mitchell who launched his JNL Racing Yamaha R6 out in front with a lap time of 1:00.923. Following close behind with only .257 seconds separating the pair was Oliver Cambridge, while Guenther finished third (1:01.317).

The Yamaha R3 Cup competitors had their first opportunity to hit the track this morning, and were eager to get in to practice no matter the conditions. And with the new class making their ASBK debut this weekend, it was Aiden Hayes with the fastest time in practice of 1:19.811 followed by Ty Lynch (1:21.095) and Callum Alderson (1:21.227) rounding out the top three.

In the second practice session today, the Yamaha R3 Cup competitors put some valuable kilometres on the odometer, with varying paces set across the class. However, it was once again this morning‰Ûªs fastest machine of Hayes (1:12.893) holding back Hunter Ford and Alderson.

Zac Levy pulled out all the stops in the last practice session of the day, with a lap time of 1:10.823 launching him to the top of the time sheets, and despite Ford's efforts he couldn‰Ûªt quite match Levy‰Ûªs mark, concluding the session in second with a 1:11.416 lap, followed close behind by Hayes (1:11.927).

It was young Locky Taylor however who adjusted well, pulling in with the fastest lap time of 1:21.655 ahead of Ben Leonard (1:21.690) and Moto 3 championship points leader Brian Houghton (1:26.291) who finished in third.

The last practice session before lunch, handed the Moto3 / 125GP category with a drying, patchy track, but this time it was Houghton who managed to put an improved lap time of 1:08.444 on the board, ahead of Taylor (1:08.820) and Tayla Relph of Tayla Relph Racing (1:08.887) who were second and third fastest respectively.

In the final Moto 3 / 125GP practice session for the day Houghton proved to be unstoppable, again holding on to his outstanding pace with a 1:06.641 lap time, and coming in just in front of young Taylor (1:06.955) followed by Relph who wrapped up the final practice session in third (1:07.210).

In the production class Drew Sells took the top spot this morning with a 1:32.024, however by the second session it was Reid Battye who put down the fastest lap 1:13.256. By the final Production practice session the quickest times changed yet again, with Brandon Demmery taking full advantage of the improved track conditions, finishing on top of the lap time leader board with a 1:10.331.

In the Club Challenge 600 class this morning, Rodney Whitney snatched up the fastest practice session time with a 1:28.236. In the second practice session for the morning Ben O‰ÛªConnor proved his strength on the Triumph, topping the times with a 1:05.061 In the final practice session of the day it was once again O‰ÛªConner who topped the times list with a 1:05.345 lap ‰ÛÒ proving that the additional track time in the afternoon paid off.

With ASBK practice sessions now done and dusted, competitors and teams will begin preparation for qualifying and racing at Round 2 of the 2016 Yamaha Motor Finance Australian Superbike Championship presented by Motul Pirelli at Wakefield Park.

For more information on the Yamaha Motor Finance Australian Superbike Championship presented by Motul Pirelli, head to www.asbk.com.au or like the ASBK on Facebook for live race results and to keep up do date with all the latest racing news this weekend.