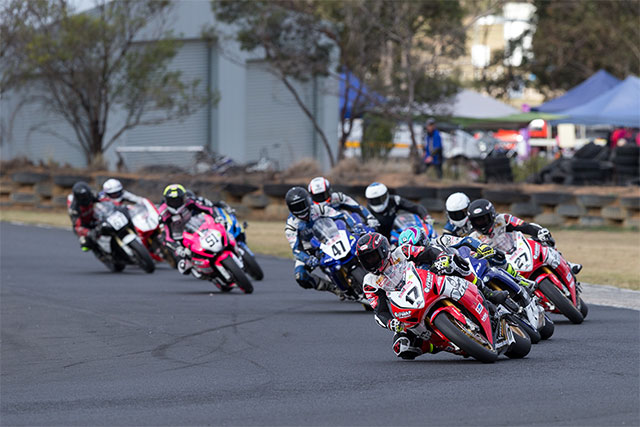 Thousands of spectators flocked to Morgan Park Raceway in Queensland today to watch on, as Crankt Protein Honda Racing‰Ûªs Troy Herfoss stormed to victory across two races at Round 5 of the Yamaha Motor Finance Australian Superbike Championship presented by Motul Pirelli.

With plenty of excitement on track during qualifying yesterday, when the Yamaha Motorcycle Insurance Superbikes headed out for their two races today, the action on track was exhilarating to say the least.

From the minute the YMI Superbike machines lined up for their media grid, there was a certain buzz in the air, and with spectators watching on like multiple time World Champion Mick Doohan, the stakes were higher than usual for Australia‰Ûªs fastest men on two wheels.

But it was once again Crankt Protein Honda Racing Team‰Ûªs Herfoss who stole the show from the minute bikes left the grid for their first 19 lap race, launching in to the early race lead followed by Yamaha Racing Team‰Ûªs Wayne Maxwell and Glenn Allerton.

In what was a huge disappointment for DesmoSport Ducati‰Ûªs Mike Jones, the defending ASBK champ was unable to even take part in the opening race sighting lap, entering the pits with bike problems, resulting in an absence from race one.

With two laps in the books, Herfoss was well and truly the fastest man on track, increasing his lead on Maxwell to an impressive two seconds. And with Herfoss holding a commanding gap on the field, the focus then shifted to the battle for second position, with Maxwell beginning to feel the pressure from Yamaha teammate Allerton and Jon Daniels Racing‰Ûªs Daniel Falzon.

Unbelievably, as riders headed in to lap eight, Herfoss had put more than four seconds in between himself and closest competitor Maxwell.

Unfortunately for Yamaha Racing Team‰Ûªs Cru Halliday, a crash on turn six during lap nine hampered his charge for a top five finish ‰ÛÒ and despite resuming for a small amount of time, the Yamaha rider eventually entered the pits, registering a DNF.

As race one for the YMI Superbikes progressed, Yamaha mounted Falzon made his way in to third position after making the pass on Allerton, who had been off the pace all weekend, while Crankt Protein Honda Racing Team‰Ûªs Jamie Stauffer continued in fifth position.

But the man of the moment was undeniably Herfoss, who with only five laps to go had increased his lead to an impressive 5.6 seconds.

As race one reached its closing stages, riders had settled in to their positions, and it was clear that no one could get close to Herfoss‰Ûªs incredible speed. So when the chequered flag flew, the Honda mounted star crossed the line victorious for the first time since round two by 3.748 seconds. Second place was snatched up by YRT‰Ûªs Maxwell, followed by Tier 2 Yamaha rider Falzon who collected third ‰ÛÒ his first podium result for 2016.

When race two kicked off late this afternoon, spectators had filled Morgan Park Raceway to see the final Round 5 battle play out, and when bikes launched off the grid for the final time, DesmoSport Ducati‰Ûªs Jones was again a notable absentee, while Herfoss once again fired off in to the race lead.

Following Herfoss by 1.8 seconds after only one lap, was Yamaha Racing Team‰Ûªs Halliday in second, while Maxwell slotted in to third position. But shortly after Maxwell put the foot down, passing his team mate in the back section of the track, and by lap three Maxwell was up to second position.

Unfortunately for Halliday, Allerton also had his teammate in his sights, and by lap four, Allerton had moved in to third position relegating Halliday to fourth.

By the halfway point in the final race, it was a familiar sight with Herfoss stretching out his lead to a whopping 4.8 seconds, while Maxwell continued to maintain second position, followed by teammates Allerton and Halliday who were going toe to toe for third place. Falzon was back in fifth position, followed by Stauffer in sixth.

And by lap 12, things began to really heat up on track, with Halliday making the move up to third position, passing his teammate and championship contender Allerton ‰ÛÒ relegating Allerton back to fourth place.

As race two reached its closing stages, Herfoss was untouchable out in front ‰ÛÒ once again stretching out his lead with every single lap he put down, and by the time riders reached lap 18 the Honda rider was in the box seat to go undefeated at Morgan Park.

And go undefeated is exactly what Crankt Protein Honda Racing Team‰Ûªs rider did. Herfoss storming to his second race victory for the weekend, ahead of Yamaha Racing Team‰Ûªs Maxwell, followed by teammate Halliday who crossed the finish line for the final time today in third.

With two from two race wins this weekend, Herfoss closed in on the YMI Superbike Championship and was awarded with the round five Superbike victory. Second position on the podium was taken by Maxwell, followed by teammate Allerton.

‰ÛÏToday‰Ûªs result is actually quite remarkable, I have never done the double, with a pole position and then two race wins,‰Û