Trey Canard happy to be back racing following injury layoff 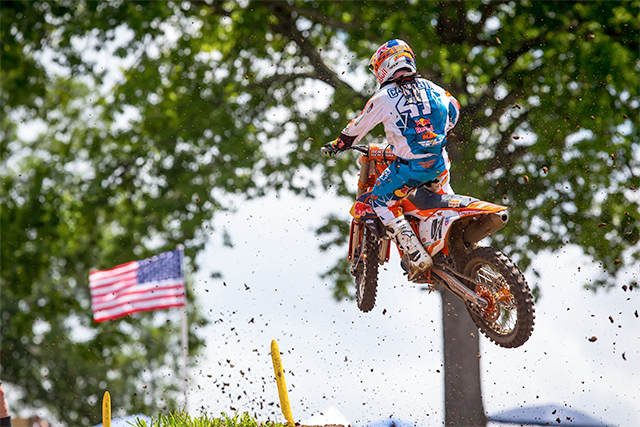 The Tennessee National, the fifth round of the AMA Pro Motocross Championship, on Saturday held at Muddy Creek Raceway in Blountville, Tenn, saw the return of Trey Canard after he sat out the last several weeks with injury.

The Red Bull KTM Factory Racing Team rider was fifth at the start of the first 450 moto and battled the majority of the race before finishing 10th. He was second at the start of the second moto, fell back to third, and stayed steady before going back to seventh. He rode as hard as he could the remainder of the race and finished 11th. The 10-11 finish gave him 12th overall on the day.

‰ÛÏI had a very good weekend. I wasn‰Ûªt even planning on coming to this race until Tuesday, so it‰Ûªs been kind of a whirlwind of a week," Canard explained.

"I was so happy to be back at the races. There were some good things to write home about. I qualified well and got good starts. I had some good moments in the motos, but there‰Ûªs no way to anticipate that race pace. I did better with it the second moto, but didn‰Ûªt have much left for the end.

All-in-all I‰Ûªm happy and I feel like I‰Ûªll have a bit more anticipation going into next week. Hopefully I‰Ûªll be able to build some momentum in the next few weeks.‰Û