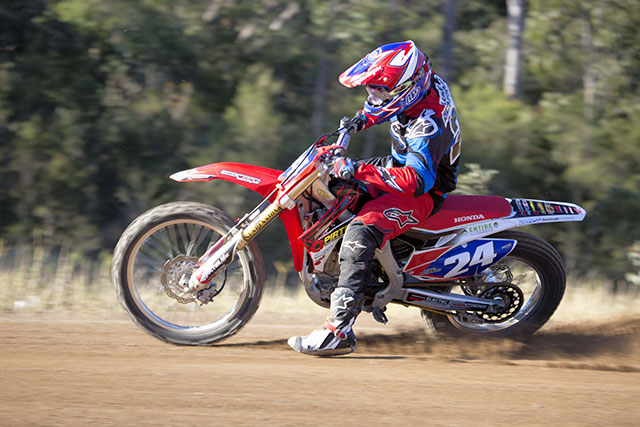 The 28th staging of the Trackmasters meeting at the Barleigh Ranch Raceway on the weekend provided some superb action as some of Australia‰Ûªs best riders fought it out for honours.

Staged by the Hunter Motor Cycle Club, and sponsored by Chris Watson Motorcycles and Honda Australia, the meeting attracted riders from as far away as Townsville and Melbourne.

The feature event, the first staging of the Rod Allen Memorial Pro Open Trophy, was as an exciting race as fans could hope for with teenager Jarred Brook passing Damien Koppe on the last corner. The Queensland 1-2 was followed by local teenager Mackenzie Childs in third and Luke Richards fourth.

Brook actually scored a clean-sweep of his three classes leading home Childs, Richards and Koppe in the Pro 450 final, while in the Pro 250 class Brook beat Boyd Hollis, Bayley James and Bailey Spencer.

Meeting organisers added a Shoot-out to the program with the top 12 riders who had qualified for the Pro Open final engaged in a series of match races where the winner stayed on the track to take on his next opponent.

Other 2-wheel winners in the seniors were Paul Caslick (Over 35s), Jake Farnsworth (Pre ‰Ûª90 machines) and the very impressive Sally Smith who beat Kelly Brown and Bree-Anna Etheridge in the Pro Womens Open.

Junior racing again showed that the future of the sport is in good hands as many talented youngsters provided their share of exciting racing.

Billy Van Eerde from Singleton was again the standout in the older age brackets winning two classes and beaten by Harry Maxwell from Proserpine in the other, while Kye Andrews of Taree was also prominent.

A special mention must be made of Damien Koppe and Kayden Downing from Townville who undertook the long drive south for the meeting. They picked up Harry Maxwell and his bike in Proserpine and then had to detour inland to get around the Rockhampton floodwaters. Each of the trio was rewarded with impressive displays.

Main Photo: Luke Richards finished on the podium in the PRO 450 class

Staged at the Barleigh Ranch Track, Raymond Terrace (NSW) on April 8 and 9.