Tough weekend ends with a solid finish for Jack Miller 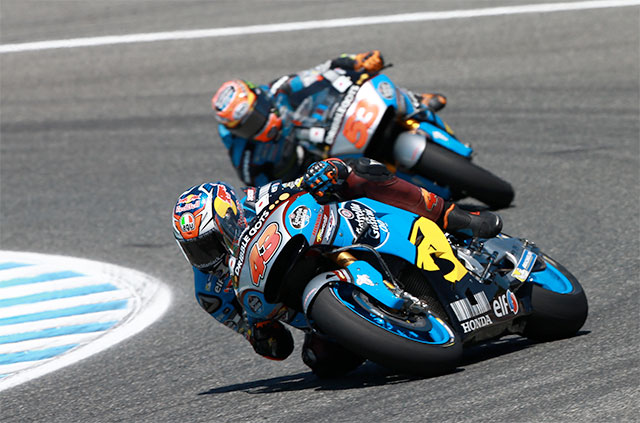 Team Estrella Galicia 0,0 Marc VDS riders Jack Miller gained plenty of knowledge but unfortunately no points at the end of a demanding MotoGP race at the Jerez track in Spain.

With ambient temperatures considerably higher than those experienced in practice and qualifying, tyre preservation took on greater importance in a physically demanding 27-lap race that was played out in front of a packed crowd of over 100,000 vocal fans.

Australian Miller did a fantastic job of conserving his tyres in the opening laps to come on strong in the latter stages of a race that saw the 21-year-old post lap times comparable to those competing around 10th position.

Miller‰Ûªs impressive pace and determination to shrug off the on-going discomfort of a right ankle injury suffered in Texas went largely unrewarded, as he had to settle for 17th position. But he can take great encouragement from his second finish of the season going into an important one-day test at Jerez tomorrow.

‰ÛÏIt was a tough weekend but I am happy to have got through it safely and with a solid finish under my belt after the injury problems in Austin," Miller said.

"I struggled throughout the race in the hairpins and it really showed in the early laps. I had no confidence and couldn‰Ûªt make any passes but I have to be positive because the heat made it a very physical race and my body held up really well, so all the training I‰Ûªve been able to do while still hurt has paid off. In the second part of the race I felt good because I‰Ûªd worked hard to conserve my tyres. Maybe I saved them a bit too much but it was important to finish and learn a lot.

"I look forward to the test tomorrow without any pressure where I can just focus on improving the bike in the hairpins, which is something I‰Ûªll need to be better with at the next race in Le Mans," he concluded.