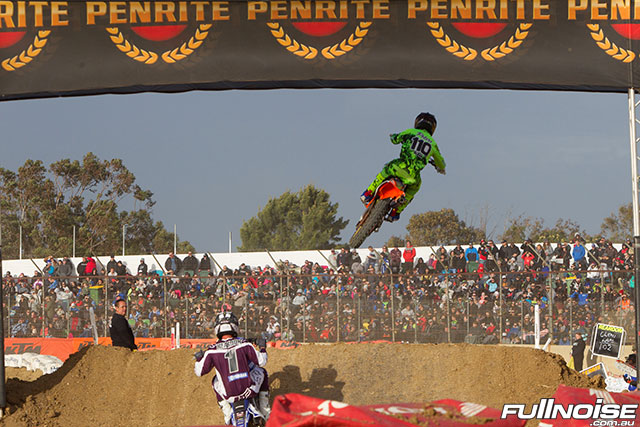 The American gained a strong start to the 20 lap main event but was denied his chance at back-to-back podiums, ending the night in the Race Safe truck after he slid on an up-ramp and connected with another rider mid-flight.

Peters parted company with his bike and landed on his feet from altitude, suffering bone bruising and an ankle sprain, and with his bike severely damaged as well, would take no further part in the race.

"It was a bit of a tough night for me," Peters lamented, "The track conditions were really baked so it was very slippery and the lighting was really dark. I got off to a great start, and was riding pretty well, but made a little mistake and connected with another rider in the air and ended up going down pretty hard. My hand came off the grip in the air and I whiskied off the next jump and ended up ejecting and landed off the side of the jump. It was a good one for sure, the bike was unable to finish. 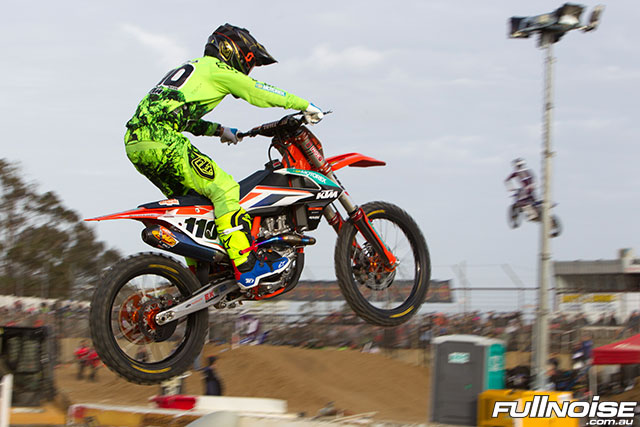 Kyle Peters was looking good for a back to back podium until a crash ended the American's night. Credit: Garry Morrow
Kyle Blunden, KTM Motocross Racing Team Manager, echoed Peters thoughts on the track, ‰ÛÏI‰Ûªve never seen a race track as hard-packed and technical as that. It was a lot like concrete out there, so the guys had to be super patient and careful with the amount of power they have on tap. But if you get a good start and keep putting down consistent laps it was going to show dividends in the end.

"Kyle did have a good start, but he slid up an up-ramp and came together with another rider in the air and went down. He couldn't restart and got a sprained ankle."