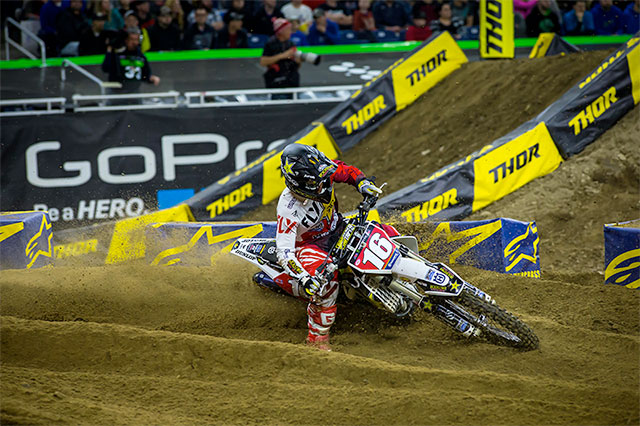 At the Detroit round of the Monster Energy Supercross Championship Zach Osborne had just about the worst thing that can happen, happen when you are leading a championship: pretty much go out in the first corner.

While the Rockstar Energy Husqvarna Factory Racing Team rider was able to re-mount he wasn't able to climb any higher than 18th after being forced to stop for a wheel change.

Osborne got a mid-pack start in his heat, started moving through the pack, then got caught up behind a downed rider in the sand section. He quickly regrouped and started giving chase before charging up to third for the finish.

He lined up for the main looking to extend his points lead, got a great start, but then went down after getting caught in the middle of pileup. He remounted, took a quick visit to the mechanic‰Ûªs area, then charged back on the track to salvage valuable championship points. He finished 18th, and is currently third in 250 SX East rider point standings. Joey Savatgy took a 10 point lead in the championship with his second place while round winner Jordon Smith is only a point ahead of Osborne in second.