Top three talk before another Supersport fight at the ASBK 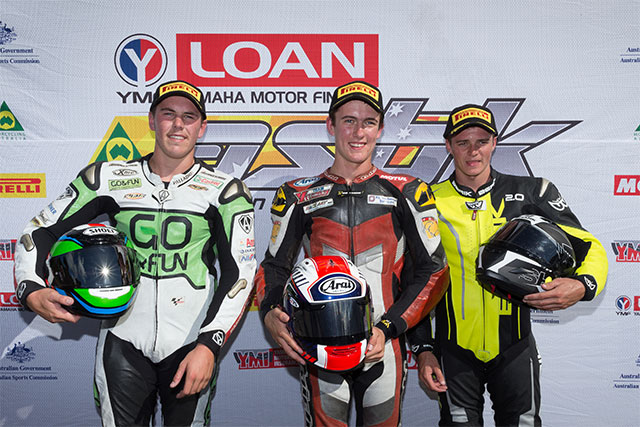 Leading into the fourth round of the 2016 Yamaha Motor Finance Australian Superbike Championship presented by Motul Pirelli the top three Motul Supersport Championship contenders Troy Guenther, Sam Clarke and Callum Spriggs share their thoughts before heading west to battle it out at the iconic Barbagallo Raceway in Western Australia on June 3-5.

My expectation next weekend is to try and increase my lead in the championship, and I guess the best way to do that is to win both races, so that‰Ûªs the target. As always the Supersport field is going to be quite competitive with all the usual suspects who are fast consistently. We had a really good test at Barbagallo a few weeks ago and I am feeling comfortable with the track and how I feel on the Yamaha R6.

Apart from the usual guys there might me be a few WA locals that might be fast too. But you have to say that the front runners have been the most consistent riders in the Championship so far, so I would say they are the three contenders. With having Sam close behind in the points and it being his home track I am sure he is going to be very fast. It‰Ûªs going to be a good fight just like the other rounds.

What do you believe is the most important thing that every racer must have in order to win a championship?

I think you need to be fast that‰Ûªs very important because the way the points system works you have to win races to be able to win the championship. I think it is really important that you are consistent as well so really I think for a championship win its going to be a person who wins the most races and has the least amount of DNF‰Ûªs. Both speed and consistency are the keys to winning a championship.

I was really lucky I got a chance to ride at Barbagallo a couple of weeks ago for a test and it‰Ûªs an amazing track! The elevation is so much fun. I was watching ASBK races last year and and you can see it on the television but it doesn‰Ûªt do it any justice. It is one of the most fun tracks I have ridden here in Australia I reckon.

That‰Ûªs hard, and that‰Ûªs a very good question. You can‰Ûªt go by any of the top four, Mike‰Ûªs a little bit behind now but he still might get on a bit of a roll and catch up. I think Wayne Maxwell is going to do it. I think he is going to have a strong second half of the year, but you can never count out Glenn Allerton or Troy Herfoss either.

I get to sleep in my own bed and we don‰Ûªt have to travel so this is a cheap round for us! I feel good, I feel really good about round four actually. Since I have been doing nationals I have gotten a lot faster. At heart I know that I have what it takes to be leading, and be up the front of the grid. Unfortunately, this year we have run into some bad luck, with half points and getting a DNF. I am feeling confident because it‰Ûªs my home track and it‰Ûªs going to be nice to be able to represent my team on my home turf. Since I have been back, I have been over a second quicker since I left for the third round of the nationals. I feel confident that if I can keep it on two wheels that I should be able to place in this round.

I think that Luke Mitchell on the weekend is going to be my biggest threat. I think it will be Luke because he is the one who gave me the biggest challenge at Wakefield Park. He was just as good as me on the breaks, and that‰Ûªs normally my strong point and he was able to challenge me. Luke is a very similar rider to me, I find Troy is hot and cold but Luke is very consistent. Even though Troy is leading the title I would say Luke is my biggest threat. In saying that though everyone out there is a threat, that‰Ûªs why we race!

I find a lot of the tracks over east are not so hilly, and they are quiet bumpy so I think a lot of the riders will get a shock with how smooth the track is. It‰Ûªs a very hard braking track, it‰Ûªs almost like Wakefield, which is why I reckon Wakefield was my best round. There is no denying it‰Ûªs definitely a hard braking track and it‰Ûªs going to come down to who‰Ûªs got the balls on the breaks!

What do you believe is the most important thing that every racer must have in order to win a championship?

You have to have a good team. I have a very good team which is family based. The person who sponsors me is Banham‰Ûªs Plumbing and he is my dads best mate, he is there to help support me and he doesn‰Ûªt care where I come as long as I am having fun. There is no pressure on my side of things which is really nice. The most important thing is team, I know that when I go out on the bike I don‰Ûªt have to worry because the team have checked that everything with the bike is right and I can just go out and ride. There is no champion out there who has won a race without his team!

Wayne Maxwell! Not only do I get along really well with Wayne but he is pretty consistent and he is a very smooth rider, and I reckon he has what it takes to win this year!

I haven‰Ûªt been doing too much preparing in between rounds, I have just been working. This would be the longest amount of time I have been off the bike before. I am hoping to be competitive up the front and as always have my eyes on taking the win. This will be the first time I have ridden at Barbagallo so I am not sure what to expect. I am going to Perth this weekend for a track day and hopefully I can learn the track quick, and be fast straight away. I have been the least prepared this round, but hopefully it will be my best round yet!

Sam and Troy are definitely going to be my biggest competition next weekend. Sam, because he is fast and this is his home track so he obviously knows it quite well. Troy is leading the championship I reckon he will be fast next weekend. I am hoping I can be more aggressive than I have been at the start of the races and be battling for the win!

What are your expectations for the rest of the year?

I am hoping that I can take the confidence from the last three rounds into round four. I had a good round at Sydney Motorsport Park and hopefully for the rest of the year I can be competitive and get some wins. I would really love to get a win this year! I had a bit of a slow start to the season so I am going to try and make up the points that I lost at the start of the year, and for my home round be pretty dominant there.

Having never ridden the track before, I am going there as a bit of a blank page. I haven‰Ûªt done much research on the track or looked at many videos but I know that it has hills and a lot of different aspects compared to other tracks. I am hoping that not knowing the track works in my favour. I am not nervous about having to learn a new track, I will do more research before we get there and hopefully just jump on the bike and learn it as quick as possible.

Maxwell! The way he has been riding lately has just been really strong. Coming up to the next few rounds we will see what happens but he has done really well the last few rounds. Maxwell is good at Winton, but hopefully Mike can win at Morgan Park and take a home round win!

The fourth round of the Yamaha Motor Finance Australian Superbike Championship presented by Motul Pirelli is set to be held on June 3-5 at Barbagallo Raceway in Western Australia.