Top Steps The Aim For Kenan Sofuoglu And Fabian Foret 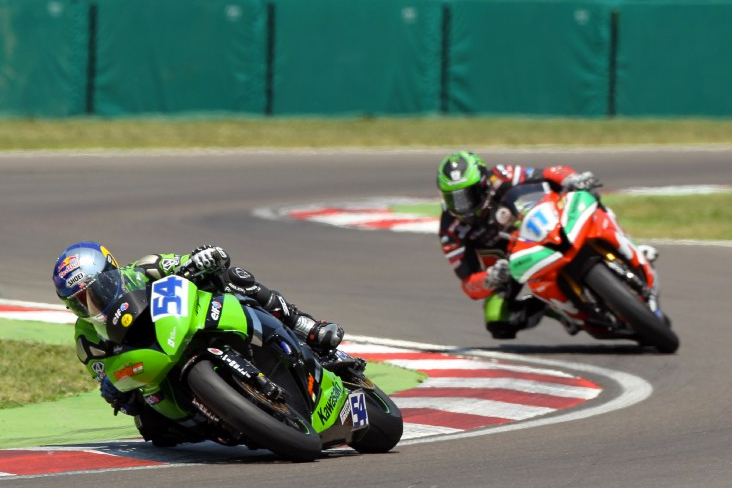 Kawasaki Mahi Racing Team India riders Kenan Sofuoglu and Fabien Foret have clear goals to achieve at the final race of the 2013 Supersport World Championship at Jerez this coming weekend.

With the Riders‰Ûª Championship moving beyond his grasp in France, despite winning the most recent Magny Cours race, Kenan is now going all out to take the final race victory.

This would give him six race wins to new champion Sam Lowes‰Ûª five and also make doubly sure Kawasaki takes the win in the Manufacturers‰Ûª Championship. Currently Kawasaki has a 17-point advantage over the next nearest challenger.

‰ÛÏThe previous round in France was good for us on raceday and we won the race." Sofuoglu stated. "In the last few events we have improved a lot and I am happy working with the team. There is only one race left and I think it will be a very hard one.

Kenan has won three of the last four races so the formbook is on his side as the championship reaches its 13th and final round.

"We have each won five races and I know Sam has been doing the same calculation so we each want to win the last race of the year. I expect a hard weekend again but of course we are going there for the race win," Sofuoglu concluded.

Highly experienced WSS rider and Motorland Aragon race winner Fabien Foret is determined to make a push for a final round podium in Spain. This kind of result would protect his current third place ranking in the points and allow him to end the season with his sixth podium of the campaign, and what would be the 45th top three race finish of his career.

‰ÛÏAll is OK with me and for the last round I feel I will be happy to finish it on a high." Foret said. "The season is long and at sometimes it has been a bit tough. I want to finish in a positive way, as it is always good to have a strong round before the season finishes.

"I am not quite sure what I will do next year but maybe this will be my last race in the Supersport World Championship class. I have done a lot of races in this class so this occasion may be a bit special - but that just makes me more motivated to have a good result.

"I want to have a podium in the Spanish race to make sure I can get a top three finish in the championship. I am not bothered by statistics and things like that but this one feels a little bit special anyway.‰Û