Toni Elias Leads Them Into Suzuki Superbike Shootout Of Georgia 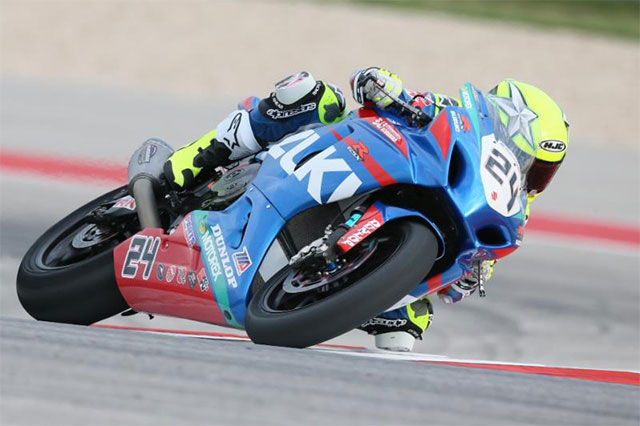 When the announcement came that Toni Elias was headed to the 2016 MotoAmerica AMA/FIM North American Road Racing Championship as a fill-in rider for the injured Jake Lewis on the Yoshimura Suzuki team, chances are not many of the top Superbike men lost much sleep.

But that was then and this is now. And it's a given that more than a few of them have tossed and turned a bit this week after witnessing the diminutive Spaniard win both races in the opening round of the MotoAmerica series at the Circuit of The Americas in Austin, Texas (COTA), this past weekend.

With COTA in the rear-view mirror, the stars of the MotoAmerica Series descend on Road Atlanta, April 15-17, for the Suzuki Superbike Shootout of Georgia, round two of the 2016 MotoAmerica AMA/FIM North American Road Racing Championship. Will it be a weekend of redemption for the American racers or more of the same for Elias? Only time will tell.

Elias knows that Road Atlanta will prove to be more difficult for him than COTA. After all, he's never seen the place - except for in videos. He also knows that several of the top MotoAmerica riders cut their teeth at the racetrack known for its famous set of esses and the red Georgia clay that borders the track.

"(Road Atlanta) Looks nice, but looks really difficult," Elias said at COTA. "I think I will see the reality of this championship and all these guys. It will not be like here, but it's a challenge for me and I have a lot of motivation to learn the track, the track conditions, learn about these guys and I'm happy to have this opportunity and then we will see if I continue or not."

Elias is riding like a man determined to keep his ride. He knows when Jake Lewis returns, a decision will have to be made. Do they add a third bike to the Yoshimura Suzuki team, or does Elias have to return home? It's difficult to imagine that the leader of the championship gets sent packing, but it shows just how important the upcoming race at Road Atlanta is to so many people.

If it's important to Elias, it's also important to Roger Hayden. Hayden was unlucky to not win race one at COTA. He had gapped the field when a red flag was thrown due to oil being dropped on the backstraight. When the race re-started, Hayden wasn't the same as he suffered from a lack of grip that meant he couldn't challenge Elias. In race two, Hayden fought to the end with the Spaniard, and only gave up the chase in the final laps when he realized he could match Elias but not beat him.

And if Road Atlanta is important to the two Suzuki riders, it's downright critical to the Monster Energy/Graves Yamaha duo of Josh Hayes and Cameron Beaubier. Simply put, the Yamaha team hasn't been in this position in a very long time. Although Hayes was third in both races at COTA, it wasn't a close third. In Sunday's finale, he was over 12 seconds adrift of the Suzukis.

And it was even worse for defending MotoAmerica Superbike Champion Cameron Beaubier, the Californian having crashed out of Saturday's race before finishing a struggling fourth in race two on Sunday in what was his worst weekend since moving to the Superbike class. Beaubier goes into Road Atlanta trailing Elias by 37 points.

Bobby Fong wasn't close to Toni Elias either, but at this point he doesn't need to be. The Latus Motors Racing rider finished an impressive fifth on both days of Superbike racing at COTA and that gave him victory in the Bazzaz Superstock 1000 class in both. It was a big weekend for Fong and it was big for Kawasaki as the combo won the class for the first time in their MotoAmerica debut. Remember, Yamaha won every single round of Superstock 1000 a year ago.

This weekend's Suzuki Superbike Shootout of Georgia will also include round two of the Supersport class. Y.E.S./Graves Yamaha's Garrett Gerloff, who won his only race of the season last year at Road Atlanta, beat his teammate JD Beach and M4 Suzuki's Valentin Debise in the series opener at COTA, with the Supersport class competing only once as MotoAmerica shared the event with the Red Bull Grand Prix of The Americas.