Toni Elias does the double in MotoAmerica Superbike At COTA 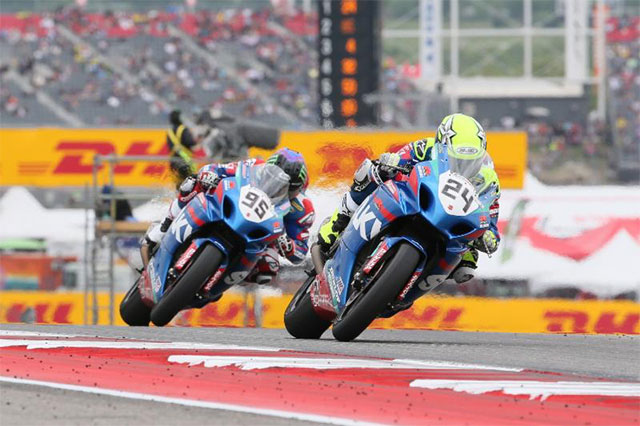 Yoshimura Suzuki's fill-in rider Toni Elias was perfect over the course of the two MotoAmerica Superbike races at Circuit of The Americas this weekend, the Spaniard beating his teammate Roger Hayden to win his second race in two days on an overcast Sunday afternoon in Austin.

Elias kept his perfect MotoAmerica season intact, the former Moto2 World Champion and MotoGP race winner holding off a stalking Hayden for the majority of the 15 laps to ultimately win by a tad over four seconds once Hayden threw in the towel on the final lap.

"I'm not the King, just winning some races," Elias said after winning his second race in two days. "I'm happy and I'm satisfied. At the beginning of the race, I was a little bit worried. I didn't have a great, great feeling, but we start, I try to stay behind Roger (Hayden) and Cameron (Beaubier). Finally, I found myself again and try to go away but was impossible.

"Roger was there all the time. My rhythm was good, the tires were sliding a lot all the time, but I make one mistake and he passed me again. Finally, I could do what I wanted and take some gap, but only in the last three laps. I was at home (without a ride) and I cannot ask for more. It's amazing. It's perfect." 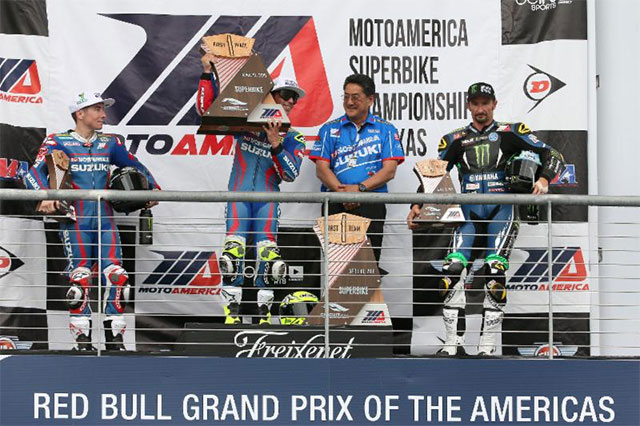 Elias (center) hoists the winner's trophy with Yoshimura Suzuki's Don Sakakura. The pair are flanked by Hayden (left) and Josh Hayes (right). Photo: Brian J Nelson
Third place went to four-time AMA Superbike Champion Josh Hayes, the Monster Energy/Graves Yamaha rider on the podium but disappointed at ending up almost 16 seconds behind Elias. Still, he fared better than his teammate Cameron Beaubier, the defending MotoAmerica Champion forced to charge his way through the pack to a fourth-place finish after an early off-track excursion.

Fifth place went to Latus Motors Kawasaki's Bobby Fong, the Californian again crossing the line as the top Superstock 1000 finisher. Fong held on to fourth for most of the race until being caught and passed by Beaubier.

"Pushing 110 percent and I know by the end of the race I couldn't do those times," Fong said. "We tried and I knew that I had a gap on the Superstock guys and I kept on seeing plus one, plus two on my board and then I heard an R1 behind me. I thought it was Josh Day or (Josh) Herrin trying to get by me and it was Cameron (Beaubier). I wasn't too worried after that. I was pretty thankful it was Cameron and not one of the Superstock guys."

Sixth place featured a titanic battle between Aprilia HSBK Racing's Claudio Corti, Wheels In Motion/Motosport.com/Meen Motorsports' Josh Herrin and TOBC's Danny Eslick. The three tussled for most of the race with the top spot being exchanged multiple times over the course of a lap. At the finish line it was Corti taking sixth with Herrin seventh and Eslick eighth. The trio was separated by just .197 of a second at the flag, and it was Corti and Herrin joining Fong on the Bazzaz Superstock 1000 podium. 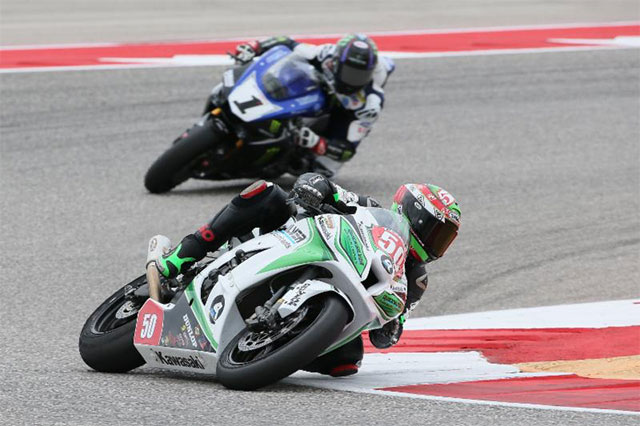 Bobby Fong (50) was fifth overall and first in Superstock 1000. Cameron Beaubier (1) ended up fourth after having braking issues in the race.
Broaster Chicken/Roadrace Factory's Jake Gagne, who was fourth yesterday, struggled today and ended up ninth. MotoEverything/DieselOps Racing's Taylor Knapp rounded out the top 10 finishers.

If there was a question after his win yesterday of what Yoshimura Suzuki would do with Elias when Jake Lewis returns in a race or two from injury, the question now looms even larger. Elias is leading the 2016 MotoAmerica Superbike Championship by 10 points over Hayden, 50-40, as the series moves to Road Atlanta for two more races next weekend.

"Today was a really good race," Hayden said. "As soon as I got the holeshot my lap time was a low 10 and that's what I've been working hard on to try and get away. Toni came by me and the whole race was 9s, low 10s. His pace was incredible and the last couple of laps I was just sliding around a lot and he kinda got a little gap on me.

"I'm really happy for the team and they're working really hard and to sweep the weekend with qualifying first and second, first and second in both races... they deserve that. We've been getting our butts kicked pretty bad the last couple of years by Josh and Cam and it kind of feels good as a team to finally give them a little piece of the bad taste that we've been getting.

"We want to win just like those guys want to win, so it feels good, but I don't like getting second either and I want to win one of these. I'm doing all the right things and eventually it's going to happen."

A modest Elias knows that Road Atlanta might portray a different picture than the Circuit of The Americas.

"I see only videos - on-board cameras," Elias said of Road Atlanta, the site of round two of the MotoAmerica Championship. "Looks nice, but looks really difficult. I think I will see the reality of this championship and all these guys. It will not be like here, but it's a challenge for me and I have a lot of motivation to learn the track, the track conditions, learn about these guys and I'm happy to have this opportunity and then we will see if I continue or not." 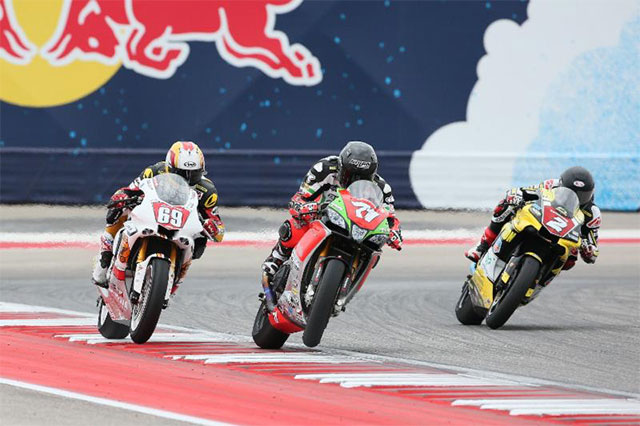 The battle for sixth was this close at the line: HSBK Aprilia's Claudio Corti (71) got the spot over Josh Herrin (2) and Danny Eslick (69).
Hayes sits third in the title chase with 32 points, 12 better than fourth-placed Gagne. Beaubier is fifth with 13 points - 37 points behind Elias.

"It was pretty crappy," Beaubier said of his weekend. "I haven't had a weekend like that in a long time. It's frustrating, really. One thing after another. Coming into this race, the team and I, everything was going so well. The tests in California and here both went really good, but for some reason this weekend we were just struggling. It was a weird, unlucky weekend.

"Yesterday I felt I had great pace and I could just go, and today I didn't have that feeling at all. I felt tight on the bike, then I had a front-brake issue. All that happened I think, I got a little air bubble in the line or something. I just went straight, the brake came back to the bar, and I went straight. But then I pumped them back up and they were perfect the rest of the race, completely fine.

"I haven't had a problem like that before. Super strange. I know how hard my guys work on the bikes and how much time they put in, and to have little things go wrong like that, it's unlucky, really unlucky. "

Fong has a perfect 50 points in the Bazzaz Superstock 1000 Championship, 14 clear of Herrin and 26 ahead of Knapp," Beaubier concluded.