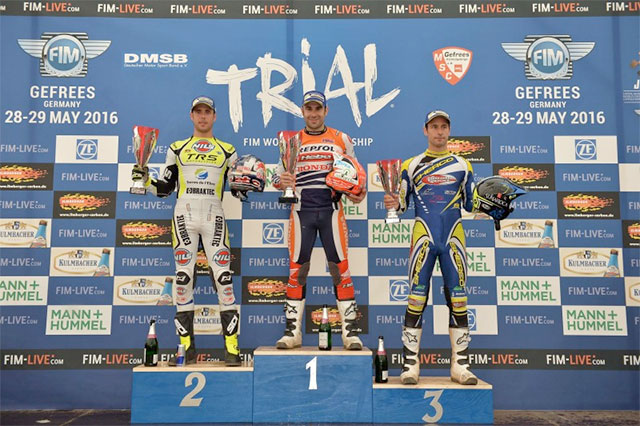 Marking his third win of the season, Toni Bou ‰ÛÒ Repsol Honda earned a narrow victory on the opening day of round three of the 2016 FIM Trial World Championship held in Gefrees, Germany.

On what proved to be a dry and warm occasion despite the severe threat of thunderstorms in the region, Bou edged himself just clear of his main rival by the end of his third lap as a mere three marks separated the podium places. Adam Raga ‰ÛÒ TRS fell just two marks short of being triumphant in second spot as he demoted his compatriot Albert Cabestany ‰ÛÒ Sherco to third position by a single mark.

This leading Spanish trio rode themselves well clear of the rest of the field with veteran campaigner Takahisa Fujinami ‰ÛÒ Repsol Honda finishing fourth but some way of the pace of rostrum placed riders.

Jeroni Fajardo ‰ÛÒ Vertigo equalled his best result of the season to date as he completed the top five on the first day of competition. Jaime Busto ‰ÛÒ Repsol Honda, James Dabill ‰ÛÒ Vertigo and Miquel Gelabert ‰ÛÒ Sherco filled places sixth through to eighth respectively, the latter of this trio recording his best ever result since moving to the TrialGP class earlier this year. This left Sweden‰Ûªs Eddie Karlsson ‰ÛÒ Montesa and Oriol Noguera ‰ÛÒ Montesa to close out Saturday‰Ûªs top ten in the blue ribbon class. 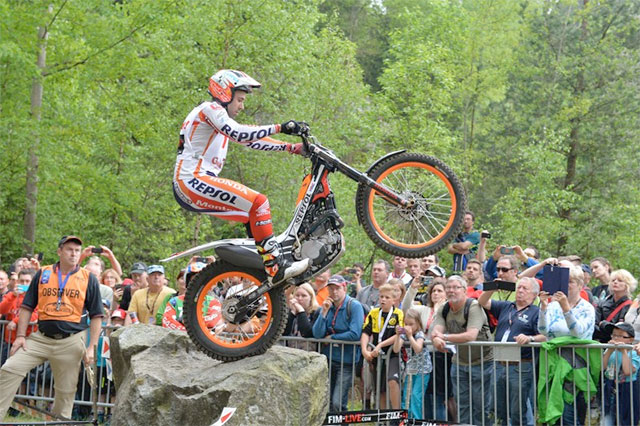 Toni Bou in action
Speaking about his latest success Bou said. ‰ÛÏThankfully my shoulder has recovered much better than I imagined and I was able to do some training during the break since Japan. I came here with a good feeling, but despite this confidence I made some bad mistakes on both lap one and lap two.

"I was pleased to be able to make a big improvement on the final lap and despite one failure, it was still possible for me to win today. Obviously this victory is important for the overall championship, and I hope I can do the same result but a better performance tomorrow.‰Û