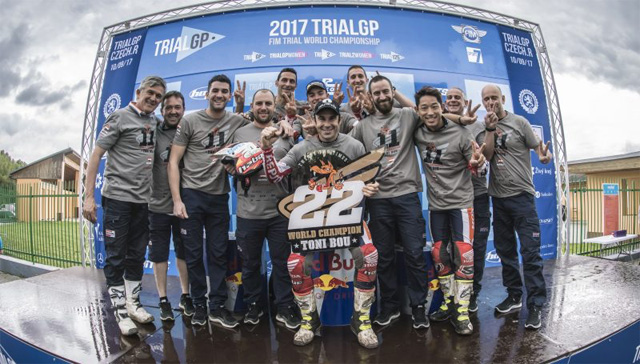 This Sunday in the Czech Republic, Repsol Honda Team rider Toni Bou, found space in the trophy cabinet for yet another world championship prize. Second place on the day was enough to accrue sufficient points to seal the 2017 TrialGP title.

Eleven outdoor and eleven indoor championships extend Toni Bou‰Ûªs absolute domination of the sport to over a decade.

The Repsol Honda Team rider just keeps on making trial history. Today in Sokolov, Czech Republic, Bou once again donned the victor‰Ûªs shirt after a taxing, complicated trial where the champ had to settle for runner-up spot. The result brought with it an outburst of joy after the tensions of the previous week, given that fourth place on the day was all that was needed to guarantee the top overall prize.

"Today was a complicated day from the beginning." Bou admitted. "I battled to win the trial but today was not to be, although the aim today had been to get the title.

"I am very happy despite several issues.

"The wet terrain we found today is not really the one I like the most, or one that favours the bike best, but we fought hard to finish on the podium. This season has been a very good one, the first victory in CamprodÌ_n and the two in Japan, where Adam Raga lost points, have been important, as well as the two victories in the United States."

The eighth and final event in the TrialGP world championship takes place next weekend in Arco di Trento, Italy.