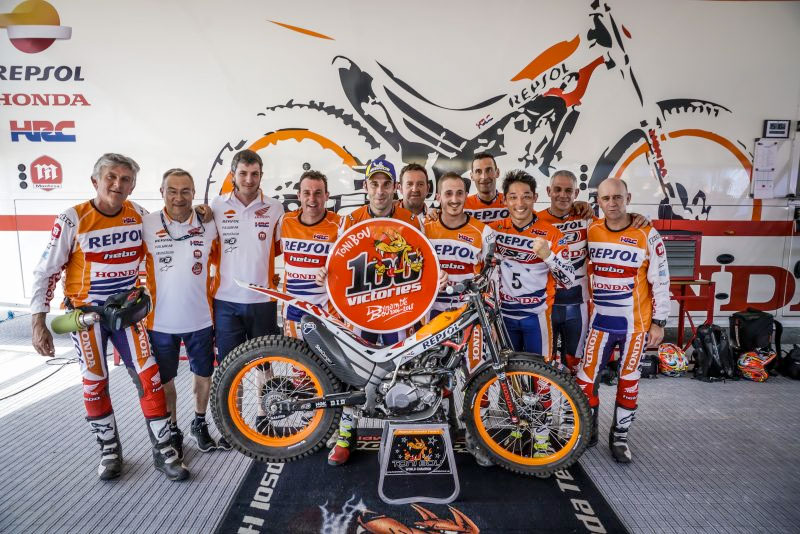 With his 100th win on the weekend, Repsol Honda's Toni Bou has surpassed the long-time record of 99 held by British legend Dougie Lampkin.
Sensational, scintillating, sublime ‰ÛÒ there are quite simply not enough superlatives in the dictionary to do justice to the amazing Toni Bou who at the TrialGP Portugal, round four of the 2018 FIM Trial World Championship, notched up a record-breaking hundredth TrialGP victory from his two hundred GP starts.

After suffering a double defeat at TrialGP Japan at the start of the month and then almost losing last weekend at TrialGP Andorra, it looked as though chinks were starting to show in the Repsol Honda riders normally impregnable armour. However, with temperatures soaring to a scorching thirty-sevendegrees the eleven-time FIM Trial World Champion ‰ÛÒ who is bidding for an incredible twelfth consecutive title this year ‰ÛÒ turned up the heat on his rivals with an imperious performance. 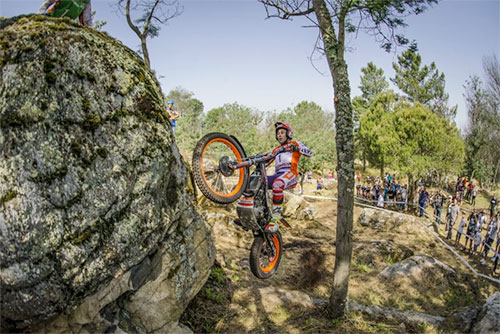 Toni Bou in action in Protugal
Huge, imposing granite boulders comprised the majority of the sections laid out over a compact course near the small town of Gouveia in the North of the country.

In his two-hundredth TrialGP start the Spanish superstar outclassed the opposition, kicking off with a first-lap total of just one that gave him an eight-mark lead over compatriot Jeroni Fajardo at the halfway stage with fellow Gas Gas rider Jaime Busto from Spain, who was third after the opening lap, a massive seventeen in arrears.

Even a maximum on the penultimate section of the Trial could not prevent him from taking a clear win and in doing so finally surpass the great Dougie Lampkin‰Ûªs record with a landmark hundredth TrialGP victory.

Fajardo‰Ûªs decision to move to Gas Gas at the end of 2017 continues to pay dividends and his lap-two total of twelve saw him end the day as a comfortable runner-up, ten marks clear of his third-placed team-mate Busto.


Veteran Beta rider Albert Cabestany also looks refreshed following a change of teams for 2018 and his total of thirty-nine was easily good enough for fourth, twenty-three marks clear of fellow Spaniard Adam Raga. The two-time World Champion, who has been runner-up behind Bou every year since 2007, continues to struggle to find his form and after the opening lap was a distant eighth before pulling back vital positions on lap two.

Beta mounted Brit James Dabill was sixth on sixty-five, two ahead of Spain‰Ûªs Oriol Noguera , with Japan‰Ûªs Takahisa Fujinami a long way off the pace in eighth. The Spanish pairing of Jorge Casales and Miquel Gelabert rounded out the top ten.

At the halfway point of the championship Bou now has a ten-point lead over Fajardo with Busto a further four behind in third. 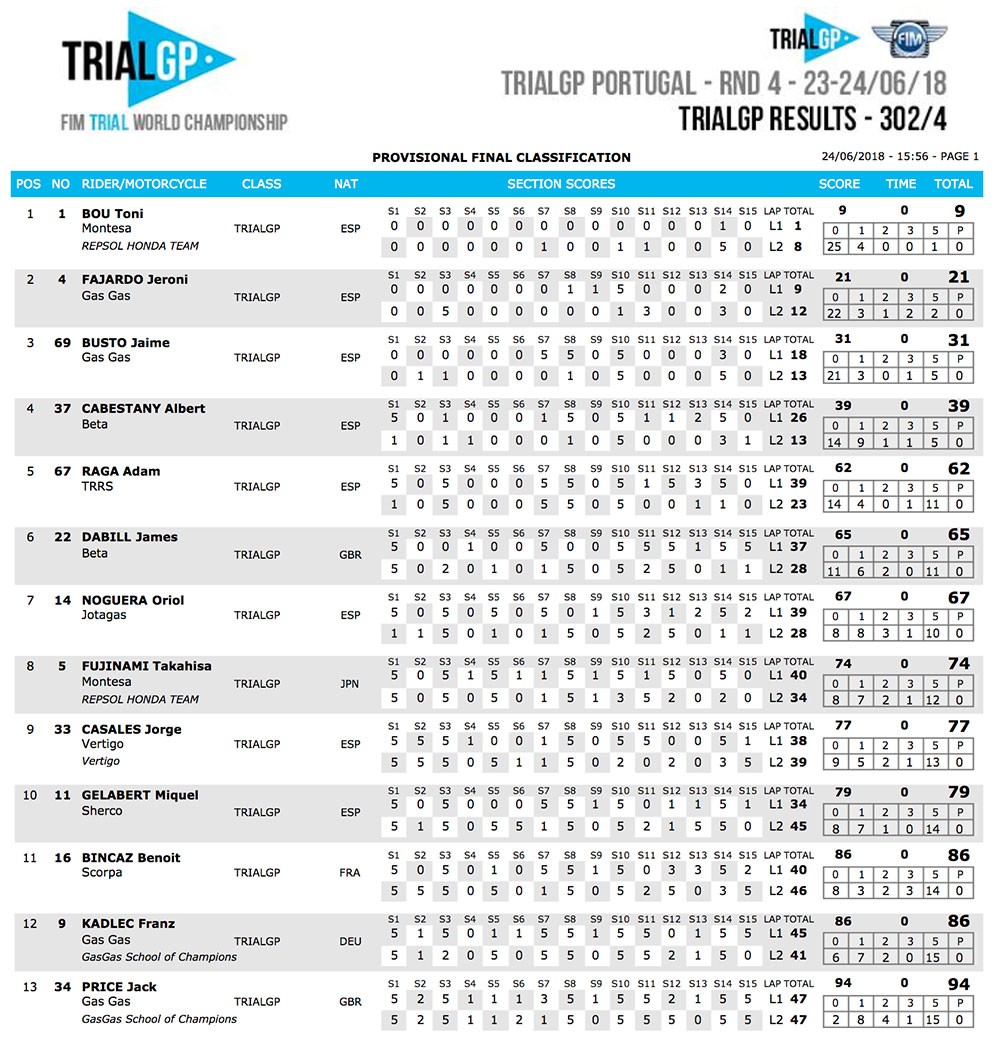 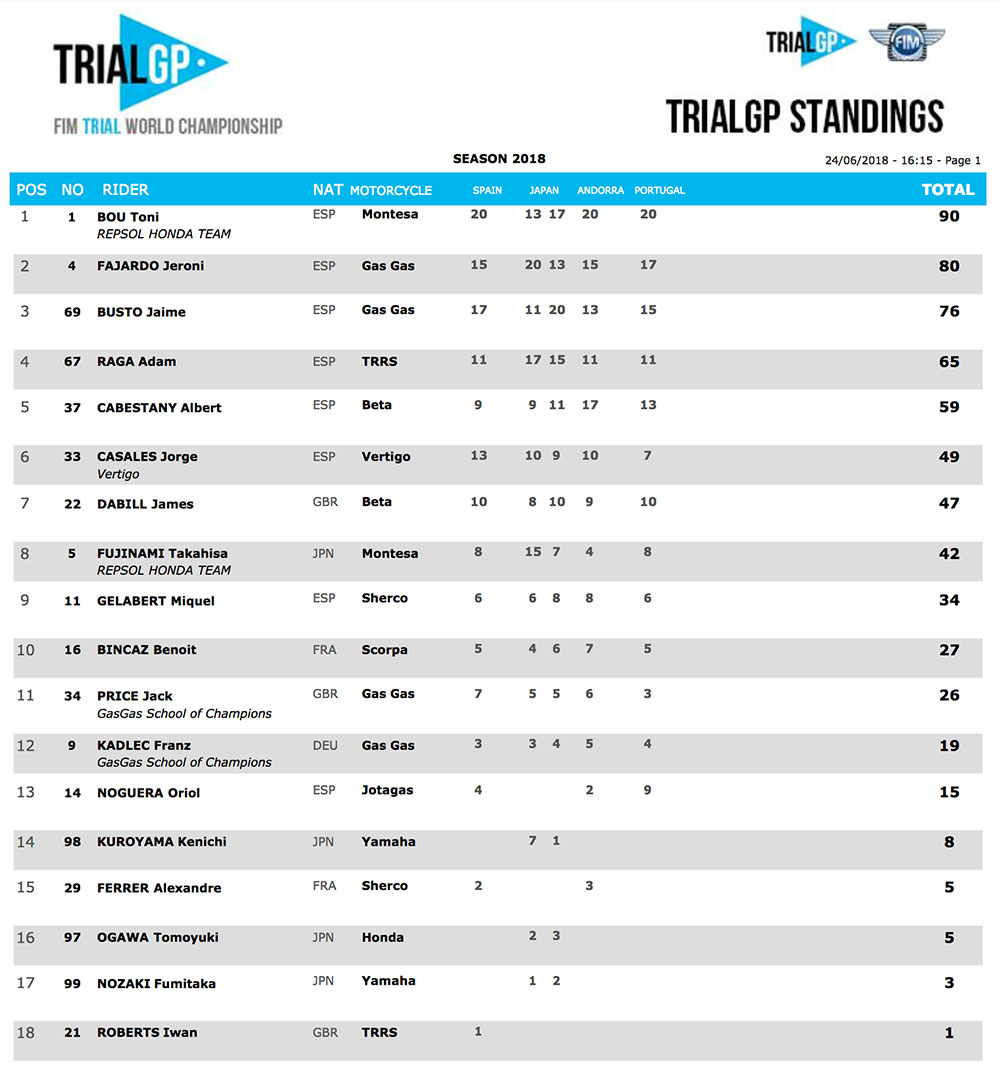