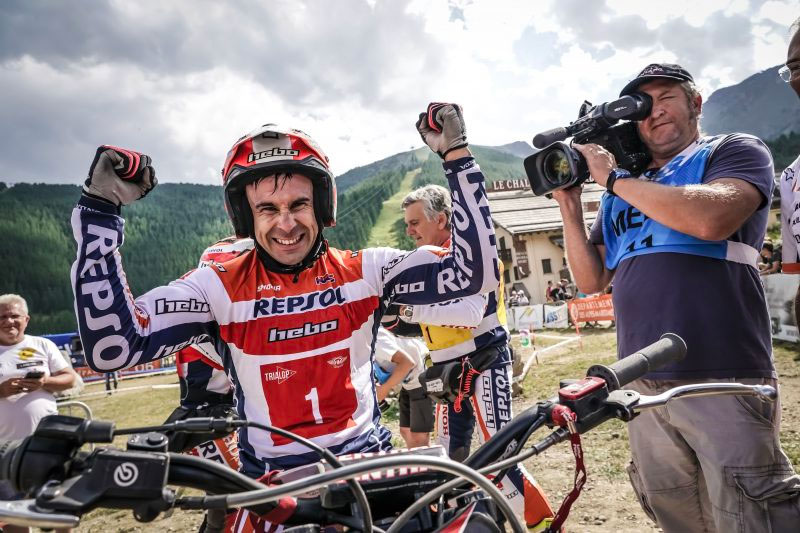 Toni Bou, who triumphed in the French trial takes his tally of consecutive title wins to 13 in TrialGP, in addition to the 13 indoor trophies. 26 titles for the greatest rider in history!
Toni Bou continued to rewrite the record books by taking victory ‰ÛÒ and with it his 13th consecutive World crown ‰ÛÒ at the TrialGP France, round six of the FIM Trial World Championship, at the Alpine resort of Auron.

The Trial opened with five sections in a dry riverbed before moving to a perilously steep, heavily-wooded hillside and then signing off at the arena-style section used for yesterday‰Ûªs Qualification.

The Repsol Honda rider was a clear leader following the opening lap of 15 sections and the sublime Spaniard kept the pressure on throughout lap two despite a strong challenge from his compatriot Jaime Busto who‰Ûªs finally found his form after what‰Ûªs been up to now a below-par season for him.

Bou‰Ûªs opening lap of seven plus one time penalty gave him a comfortable advantage of five from Busto who also picked up a single mark on time. He then signed off in style with a second-lap total of just one mark lost to rewrite his place in the history books. 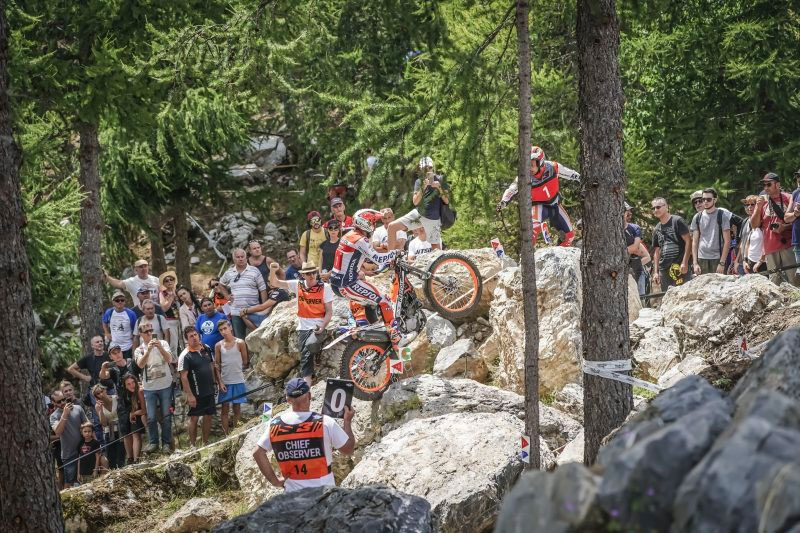 The Repsol Honda Team star has made a clean streak so far in the 2019 Trial World Championship, with one event still to contest.
Busto resisted fierce pressure from TRRS' Adam Raga ‰ÛÒ who recorded a second-lap total of just eight ‰ÛÒ to hang onto second by two marks on a total of 23. Gas Gas' Jeroni Fajardo from Spain was five behind Raga with Japan‰Ûªs Takahisa Fujinami recovering from his big Qualification crash to take fifth on 36.

"Today was a day where I had to work hard to make any difference, especially during the opening sections," the 2019 World Champion said. "But that is what we did and we made it to section eight on zero. I think I rode an intelligent trial. I felt very comfortable on the bike. As always, there is no better way to win a new title than with a victory and with good feelings. It was a short but intense world championship. I think that this season we have matured a lot. Last year we had so many injuries, this year we have been very comfortable on the bike, which we‰Ûªve seen reflected in the wins and the riding, so now it's time to savour the moment and enjoy the holidays."

"Celebrating a title is always great. First of all I want to thanks and congratulate Toni as always. Congratulate all the team of doctors who helped us, the HRC team, the Honda team and everyone who helped Toni," Cirera said.

"Obviously congratulations to his closest associates, the mechanics. We have all done a great job. This season Toni started in very good shape, that's why he has been able to win all the trials which we‰Ûªve been in until today. As we always say, ‰Û÷He's a monster!‰Ûª And as we have put on the shirt. "This is not a miracle, it‰Ûªs a legend". We can‰Ûªt ask for anything more, if we could, we would add more, year after year."

The series now takes a well-earned break before reconvening at La Nucia for TrialGP Spain, the seventh and final round of the series, on September 21-22. 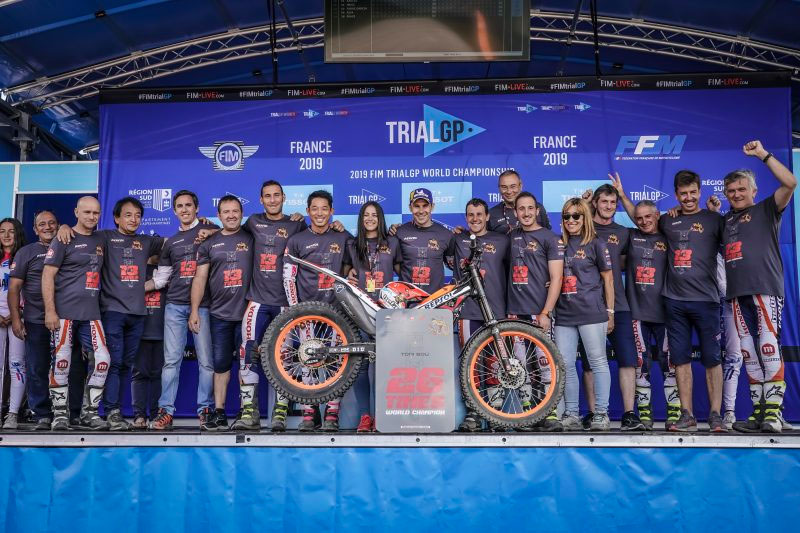 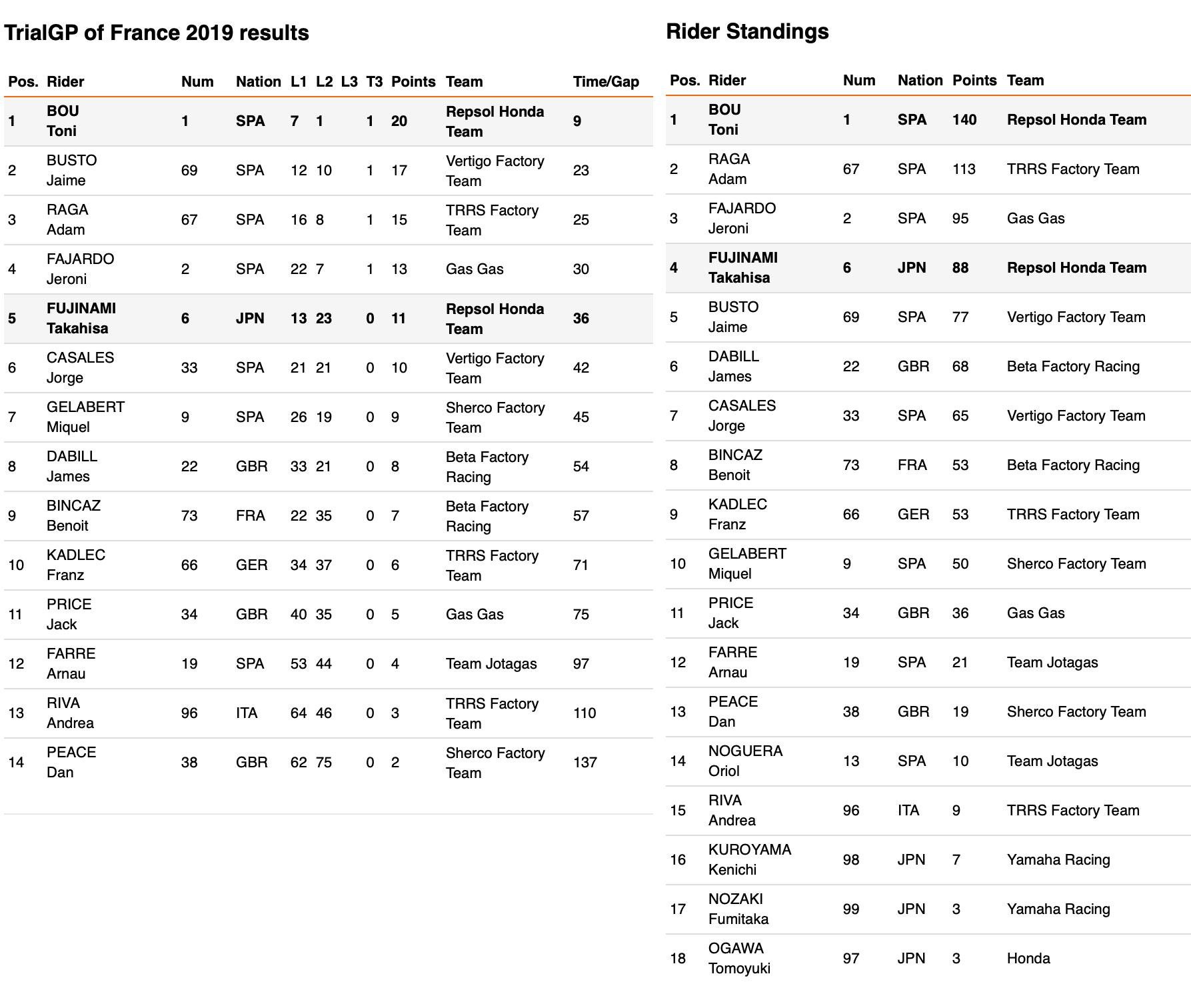