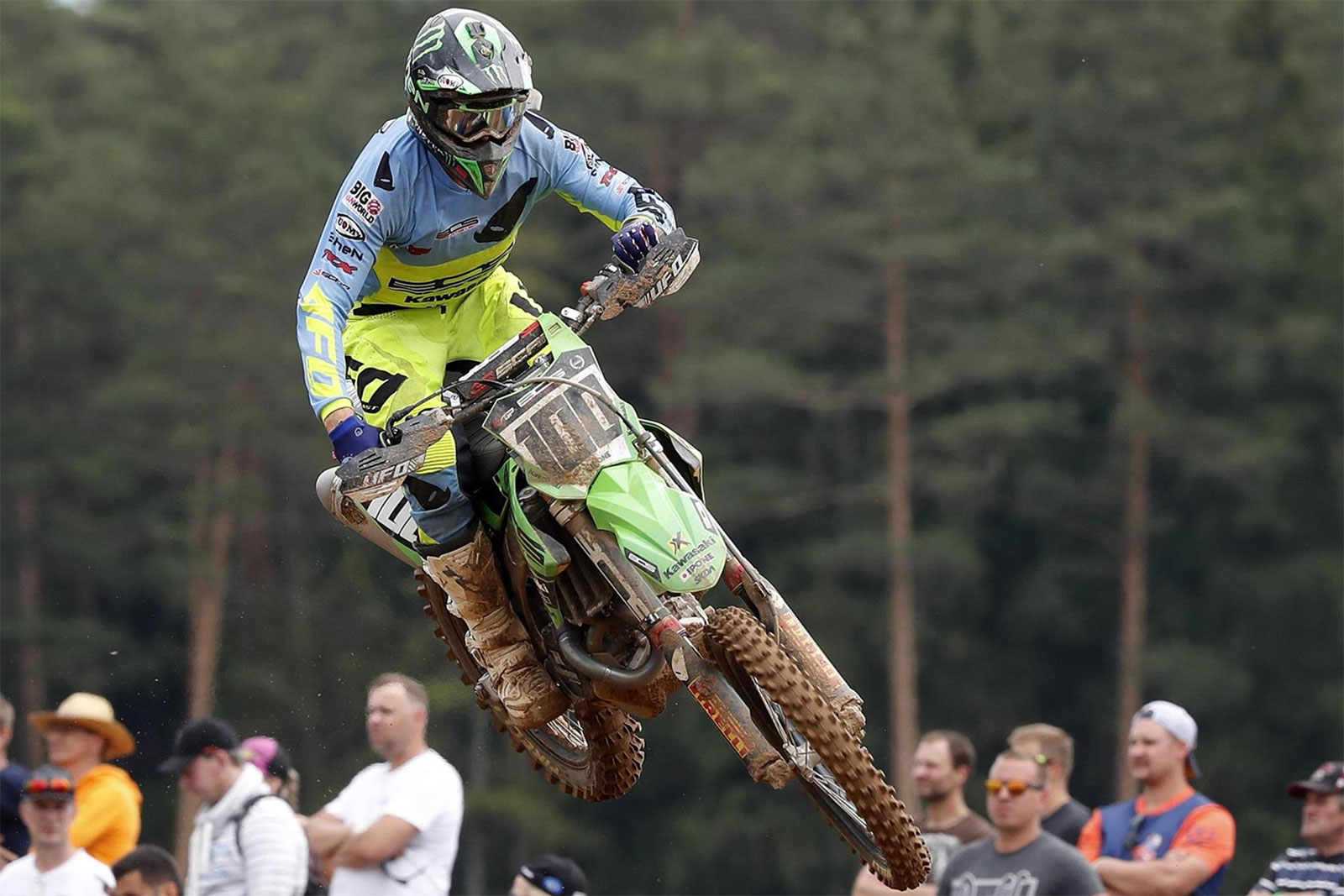 Tommy Searle
Tommy Searle will join the Monster Energy Kawasaki Racing Team for the remainder of the FIM MXGP Motocross World Championship in the wake of injuries to both factory riders.

Motocross is a tough sport and never in the past have the Kawasaki teams been so unfortunate with a dramatic series of injuries to ClÌ©ment Desalle, Evgeny Bobryshev, Alessandro Lupino and, last weekend, to Julien Lieber who crashed hard whilst putting in his best-ever performance in the premier MXGP class.

In a common effort to give the brand its best chances during the second part of the season, BOS GP has agreed to let Tommy Searle move from their team to the Factory rig for the upcoming GPs, starting with the Czech Republic at the end of July. Currently leader of the British championship, Tommy will race the remainder of the series on the same BOS Kawasaki he has been racing since the beginning of the season in the UK.

‰ÛÏI‰Ûªm obviously very happy to have this opportunity to ride for the Monster Energy Kawasaki Racing Team and I want to thank everyone involved for their support. I will work hard with them in the coming weeks to be ready and prepared for the Czech GP, and will also do my best in the British series to claimed this title for Kawasaki and BOS who gave me this opportunity this season," Searle said.

"We started the season with six super-competitive riders on Kawasaki machinery in the MXGP class but unfortunately after Germany we have only one still able to participate. It's a tough sport! The BOS team changed to Kawasaki machinery only this season and have been working very hard to deliver results at the races," Guttridge said.

"Tommy has been able to provide good feedback regards developing their race bike and particularly on the BOS suspension, which is the main goal for the team to compete at the highest level. Proof that he is comfortable on the bike is his current championship lead in the British series. However with the requirement from KHI that our factory team continue to provide feedback from the MXGP races to help develop the KX450 production bike of the future, and with both Clement and Julien now missing through injury, we concluded that Tommy should move to KRT for the remainder of this season. But not immediately, as we feel he needs to be allowed the chance to first get used to the factory bike's characteristics before lining up at the GP again.

"So the target is for KRT and Tommy to be partnered up from the Czech MXGP. I would like to sincerely thank Olivier Bossard and Jean Jacques Luisetti for their cooperation in this area and wish the BOS team the very best with their next team riders coming into the team structure soon"

FranÌ¤ois Lemariey, Monster Energy KRT Team manager, is pleased to have Searle back on board, ‰ÛÏIt‰Ûªs great to see that all the parties involved made this possible, as we need to line up our Factory bike behind the gate as soon as possible again after the injuries to ClÌ©ment and Julien.

"Julien underwent successful surgery last Monday to his arm; he is now recovering as well as ClÌ©ment but we know that both will need time before getting back to racing. Tommy did most of his GP career with Kawasaki and we are pleased to welcome him in the team; several testing sessions are already planned so we can prepare together in good shape at the MXGP of Czech Republic. It was impossible to fly to Indonesia as the crates had to be delivered earlier his week, and we want Tommy to test the bike thoroughly before racing the GPs with us. ‰Û