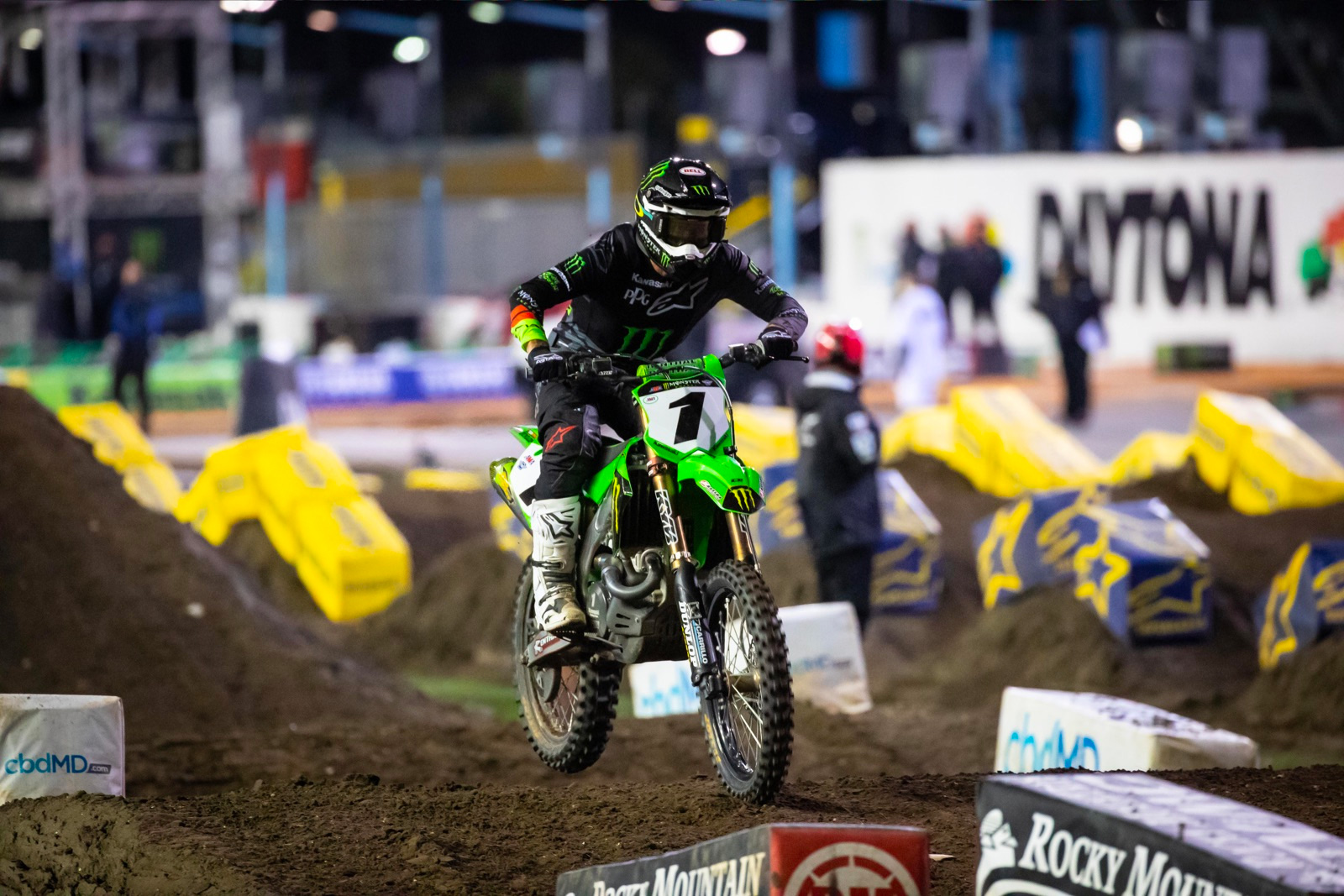 Eli Tomac grabbed his fifth Daytona win, tying him with the most 450SX Class wins at the storied Supercross event. Cooper Webb pulled another last-corner pass to grab second place with Aaron Plessinger nabbing his first career 450SX Class podium after running in second for most of the race. In Round two of the Western Regional 250SX Class Cameron McAdoo took a dramatic first-ever victory.


At the milestone 700th 450SX Class Supercross Justin Barcia grabbed the 450SX Class holeshot, but Ken Roczen was in the lead at the second turn when Webb took him wide, opening the door for Tomac to dart to the front of the pack. Webb turned the block pass into a second-place spot with Aaron Plessinger close in third. Four minutes into the 20-minute plus one lap Main Event, Plessinger pressured then passed Webb for the runner-up spot. 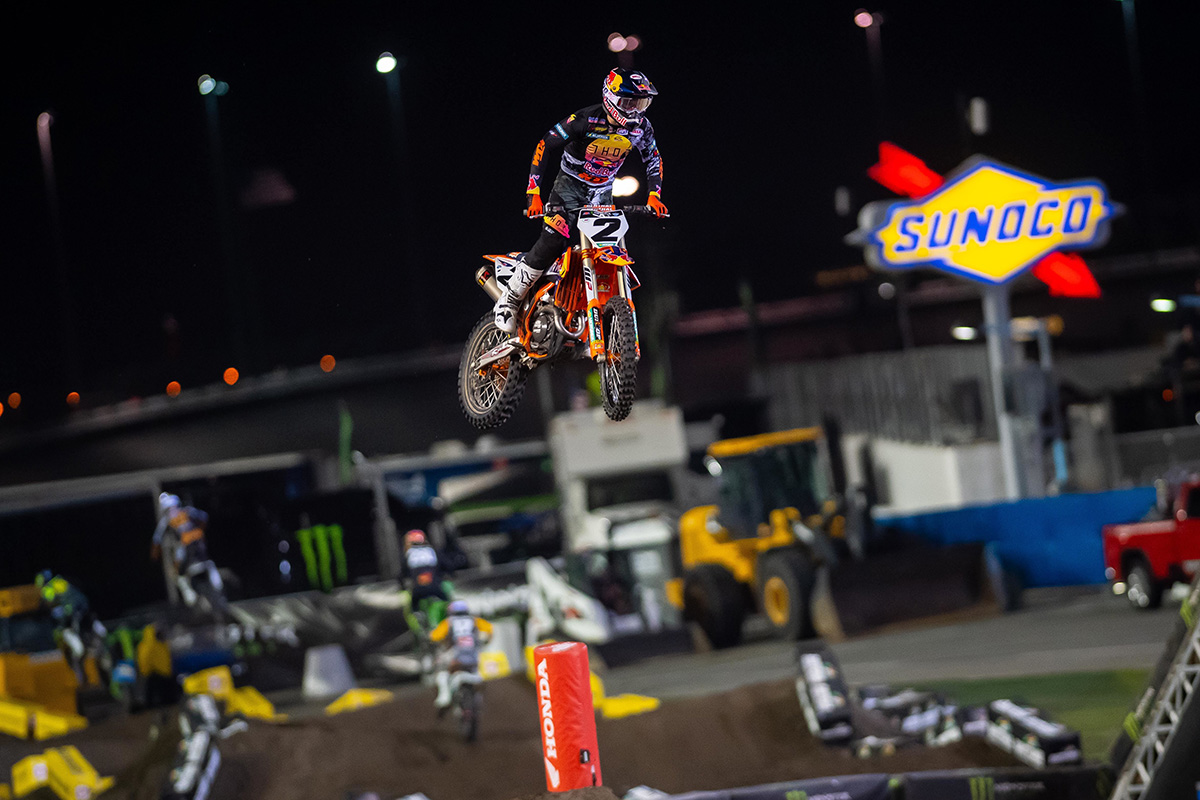 Cooper Webb had a statement performance where he made a striking last-lap pass to secure second-place in the 450SX class. Photo: Align Media
While Roczen clawed his way forward after being pushed back by Webb's block, Plessinger kept Tomac within sight. By the middle of the race, Plessinger was closer to Tomac ahead of him than to Webb behind him as Webb contended with an attack from Roczen. The top four held their spots until a mistake by Rozcen with under six minutes on the clock, allowed Malcolm Stewart to pull ahead. Rozcen battled back around with under two minutes to go and the top four looked locked until a signature final-stretch pass for a spot earned Webb second place, pulling him to within only two points of the championship points lead just past the midway race of the season.

"That was fun! I always enjoy riding at Daytona and it‰Ûªs always been good to me," Tomac said after his fifth win, which ties him with Rcky Carmichael. "I was pretty strategic when picking my gate in the main because I was watching the other class and heat races and realized the inside might be my best shot at getting up front, which is exactly what I did. I fought for it too. Once I got out front, I wasn‰Ûªt looking back. We‰Ûªre still in this championship, so I‰Ûªm not going down without a fight. I think we‰Ûªve found a good groove and I‰Ûªm looking forward to our next stop in Dallas. I‰Ûªm grateful for all the hard work and support from my entire Monster Energy Kawasaki team, I couldn‰Ûªt have done this without them, especially five times!‰Û 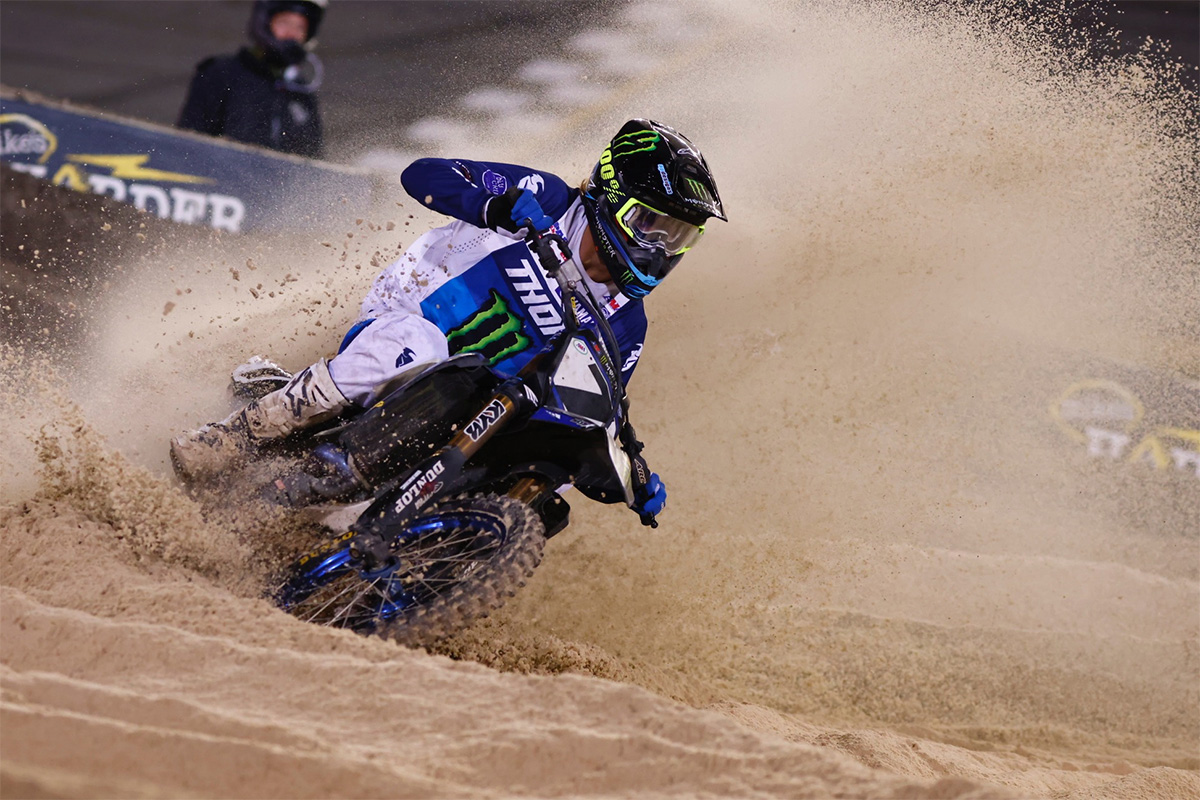 ‰ÛÏThis is definitely a monkey off my back, for sure. Going back to Daytona two years ago, I was lying in the emergency room with a shattered heel and not too sure what was going to happen after that, so to come here and rebound like I just did, it‰Ûªs crazy. I‰Ûªm speechless. I felt like I had more to give on the last couple of laps, but a podium is a podium and I‰Ûªll take what I can get. I feel like it‰Ûªs going to come a little bit easier now," Plessinger said.

‰ÛÏThe track was so gnarly, with the black sand and then beach sand and all the ruts. Some of the transitions of the jumps had such big kickers on them. It was crazy. It was a long race, but we ended up on the podium, and that‰Ûªs all I can ask for right now. I just want to give a shout-out to these guys for working their butts off and believing in me. We‰Ûªre going to keep going.‰Û 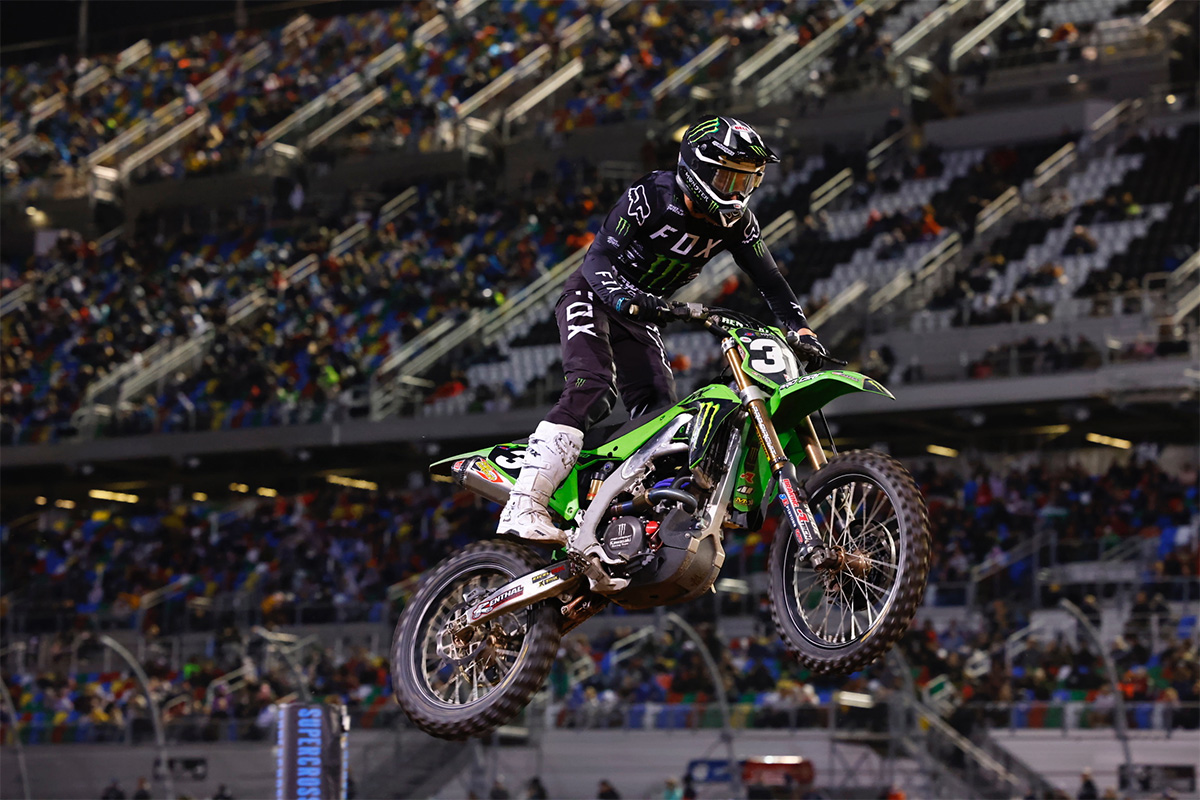 Cameron McAdoo picked a big race for his first Supercross win; the victory also put him into the championship points lead. Photo Credit: Feld Entertainment, Inc
For the first time in the sport's history, Daytona hosted the 250SX West division, and Jordan Bailey grabbed the holeshot. Rookie Stilez Robertson immediately took over the lead and looked smooth on what is considered one of the toughest tracks on the circuit. Alex Martin held second for the first five minutes of the 15-minute plus one lap race. Cameron McAdoo was on the move and after taking second from Martin set his sights on the rookie up front. With just under five minutes on the race clock McAdoo got into the lead and brought it home for his first ever Supercross victory and his first time leading the championship points.


The winner of the opening round of the division's series, Justin Cooper, got wedged between riders and the tuff blox in the second corner and was forced to fight back from outside the top 10. The Yamaha rider seemed to make quick early progress and eventually reached fourth place with one minute left on the clock but he could not catch Pierce Brown, who earned third place in his first race back after an ACL surgery and long recovery. 2020 Daytona winner Garrett Marchbanks rounded out the top five.

"That was unreal. That is what we work so hard for," McAdoo said of his maiden win. "I can‰Ûªt thank all of the guys at Monster Energy/Pro Circuit/Kawasaki enough for providing me all of the tools to get here. I have such a great team behind me. I have to give a special shout out to my mom because in 2016, she drove me all the way out here to Daytona in a van and now this is where we are. This is just the beginning and I look forward to continue working my butt off for more nights like this.‰Û 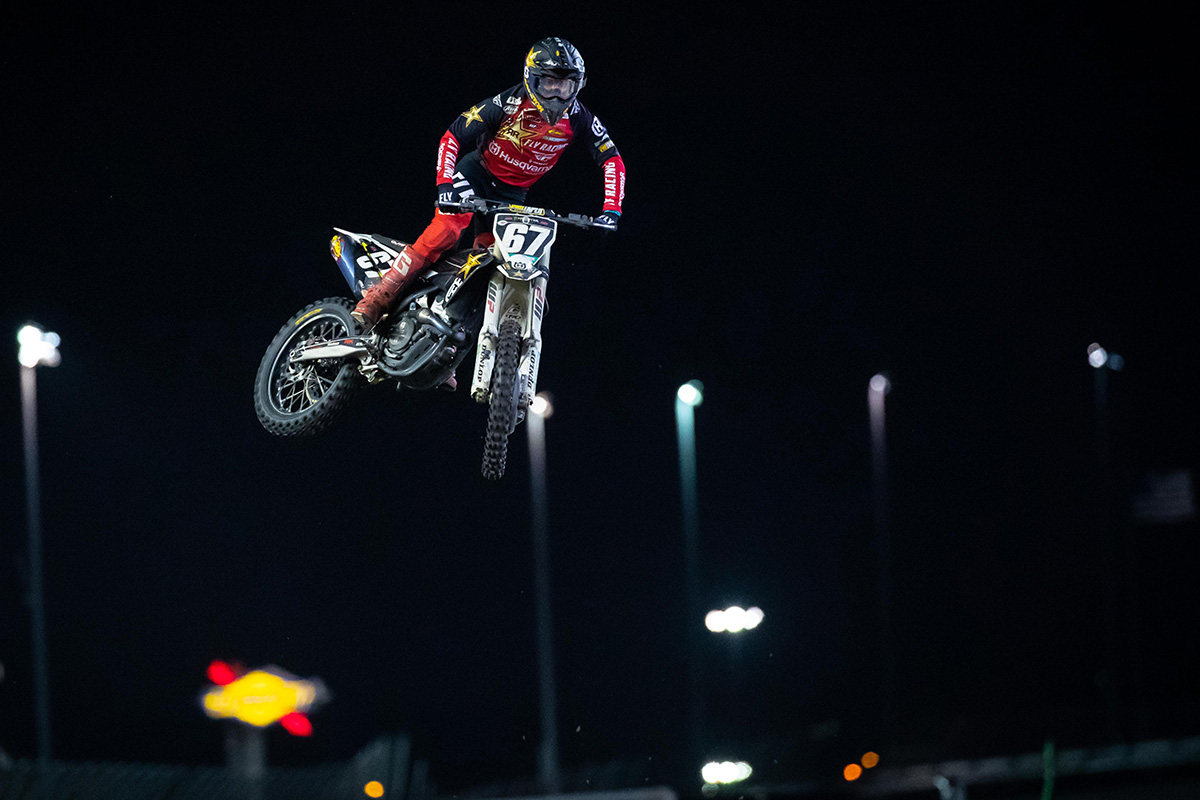 It was a monumental day for rookie Stilez Robertson, who earned a career-first podium finish in the 250SX West Main Event
The season is just past the halfway point, with eight of 17 rounds remaining. The series now heads to AT&T Stadium in Arlington, Texas for a triple header beginning on March 13th.