Tomac Tops A2, Roczen Leaves With the Red Plate 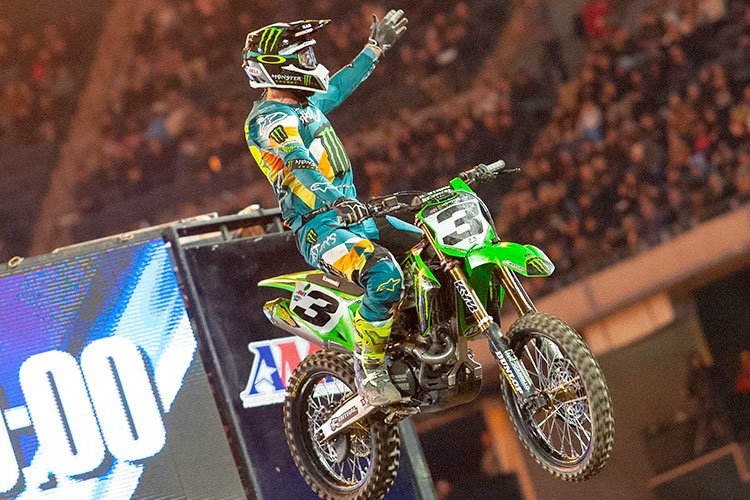 In the opening 450 heat, it was Tomac who grabbed the holeshot ahead of Red Bull KTM's Cooper Webb, with Rockstar Husqvarna's Dean Wilson in third. 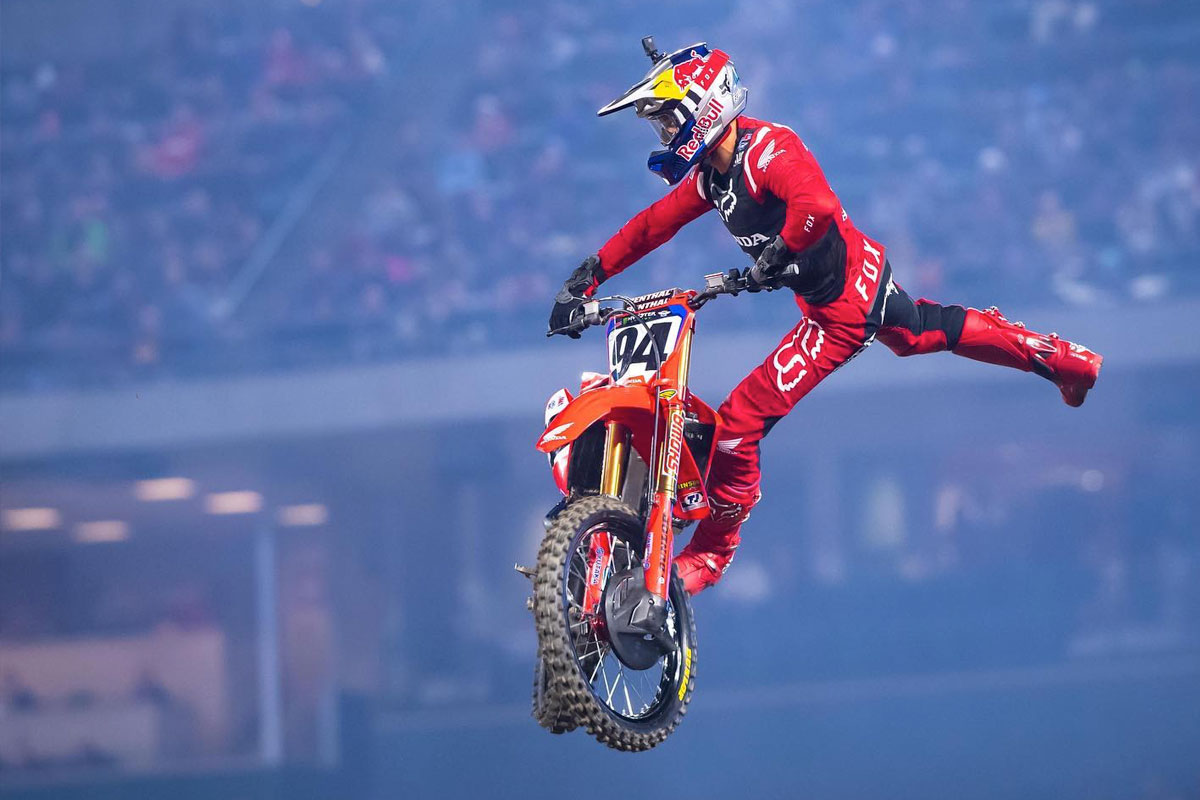 HRC Honda's Ken Roczen with an old school nac nac as he claimed second place and also the championship leaders Red Plate.
Webb quickly moved his way into the lead, but Tomac had other ideas quick retaking the lead and running away to a comfortable ten-second win ahead of Webb with Wilson holding on for third, finishing just ahead of Monster Energy Yamaha's Justin Barcia who came into the night as the championship points leader.

For the third straight round, Australia's Chad Reed was not able to qualify directly out of his heat through to the main event, finishing in 10th and making another trip to the LCQ.

It was another Monster Energy Kawasaki leading the field early in the second 450 heat, with Adam Cianciarulo edging out Rockstar Husqvarna's Zach Osborne through the first turn.

Behind them, HRC Honda's Ken Roczen quickly moved his way from 5th place into second and quickly went to work on taking the lead away from his training partner.


Just after mid-race, Roczen made is an attack, moving by Cianciarulo then holding on to a 1.5-second race win.

Rockstar Husqvarna's Jason Anderson worked his way through the field to finish third ahead of a fast-charging Malcolm Stewart who took advantage of two big sets of whoops to move his way forward.

In the LCQ, Reed had the crowd cheering in his last appearance at Anaheim, working his way to the lead and taking a popular LCQ win ahead of Chris Blose in second, Ryan Breece in third and Alex Ray in the final transfer position. 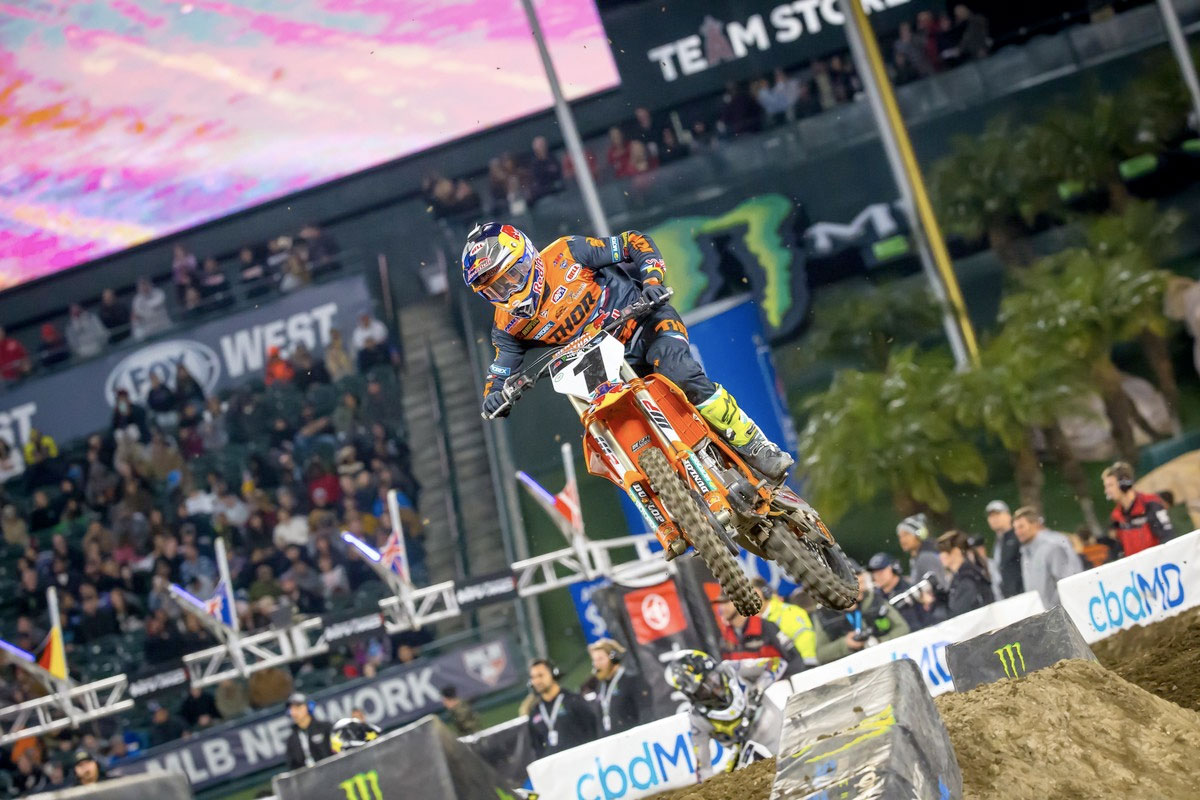 Coming off a tough finish in St. Louis last weekend due to an ongoing sickness, Cooper Webb was able to bounce back in Anaheim to claim another podium finish. Photo: Simon Cudby
When the gates dropped on the night's main event, it looked as though Roczen was going to race to his second straight race win after leading the field through the first turn and quickly opening up a handy lead.

Behind him, Tomac was on a mission quickly moving from 10th all the way up to second position and closing the five-second gap to Roczen out front.

On lap eight, Tomac moved into the lead and quickly opened up a 3-4 second lead to Roczen, with Anderson holding down third.

As the race came to a close, Tomac held his advantage racing to his first main event win of 2020, making for three different race winners in the opening three rounds.

Roczen held off a fast-finishing Webb to not only take second place for the night but also taking hold of the championship leaders red plate with Barcia finishing all the way back in 9th position.

Osborne who went from the lead to 9th in his heat race, put in a much-improved performance in the main, moving forward late in the race to finish 4th, just ahead of team-mate Anderson with Cianciarulo rounding out the top six. 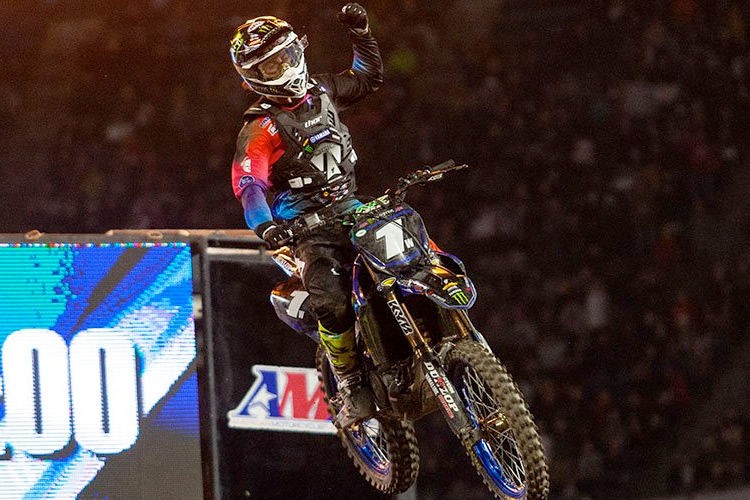 
In the 250SX West Coast class, Dylan Ferrandis didn't have a perfect night having a bit of a struggle in the early part of his heat race after getting tangled up with Jett Lawrence off the start and having to come back through the field to claim third. The final was not much different with the Frenchman having to climb back through the field after concluding the opening lap in fifth and then getting extremely physical on his way to the chequered flag.

The opening of the main event was all about the Geico Honda duo of Jett Lawrence and Christian Craig as the pair led Luke Clout around the opening lap after Lawrence took the holeshot. Lawrence took the lead on lap three as Ferrandis was riding hard to get through the field having despatched Austin Forkner with a good hit to move into third as Clout dropped down to ninth.


Ferrandis then played hardball with Craig as they collided heavily and both went down. Ferrandis was quick to remount and head off in pursuit of Lawerence while Craig was left bewildered and with a damaged bike and took no further part in the race. By this time Lawrence had amassed a ten-second lead!

Last rounds winner Austin Forkner came undone in the whoops and dropped back to fifteenth to do some damage to his title hopes. And then leader Jett Lawrence threw it away, and although remounted still held first, he had lost a lot of composure as Ferrandis closed in as well as Ferrandis' team-mate Justin Cooper.

The final lap turned out to be an epic one with the sixteen-year-old unable to hold off Ferrandis and then crashing spectacularly at the end of the whoops. As he lay motionless, eight riders went past including Cooper who claimed second and Brandon Hartranft who took the third spot again for the second week in a row. Lawrence never crossed the line as he was taken away, conscious, via the medical team but was declared ninth as all riders had been lapped up to that position. 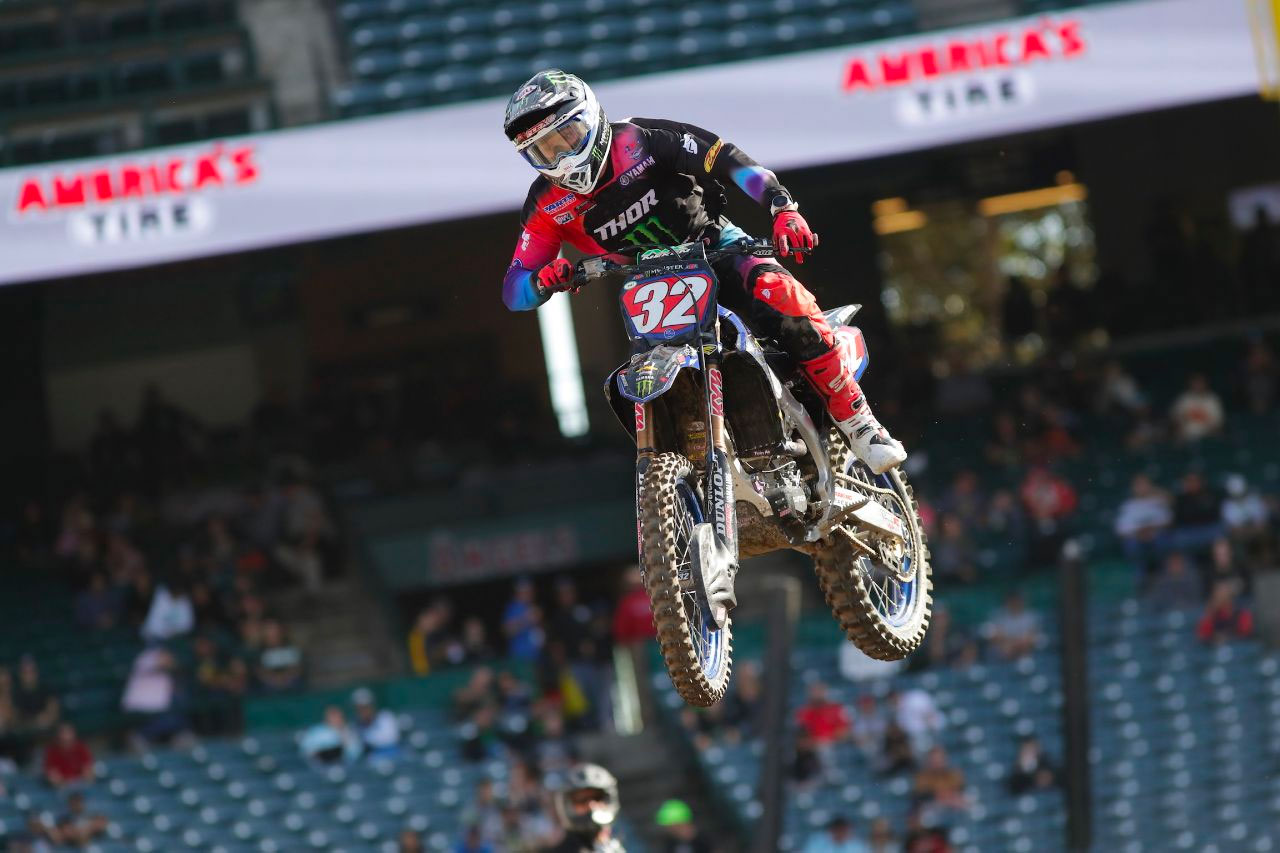 Justin Cooper ran a smart race in challenging conditions to join team-mate Dylan Ferrandis on the podium to expand his points lead and bring another 1-2 finish at the Angel Stadium of Anaheim for the Monster Energy Star Yamaha Racing team.
Michael Mosiman and Alex Martin finished just over thirty seconds back ahead of Luke CLout who finished fifth, one spot ahead of Penrite Honda team-mate Mitchell Oldenburg in sixth. Jacob Hayes was eighth ahead of Lawrence (declared ninth) with Killian Auberson rounding out the top ten. Aussie Jay Wilson just missed the top ten with eleventh while Aaron Tanti finished thirteenth.

Ferrandis' take out of Christian Craig was under review for a short while, but it was decided that no further action would be taken and was officially declared the winner.

"From my perspective, i scrubbed the finish line really fast and opened my throttle to make noise, and I don't know. we made contact, but I feel like I was a little bit in front of him, so I don't know," Ferrandis explained from the podium as the crowd jeered in the background. "I am sorry if I injured him, it's not the racing I want to do, but I give everything I have, and a win is awesome."

"It's so good as the first two races were a little off for the team and me. Riding with the number one plate carries some pressure, everybody expects a lot from, and it's not easy, so I am glad to get this win, and I think we made a big show and that's important."

Ferrandis' team-mate Justin Cooper was happy to score more points and remain in the championship lead.

"It was just a tough day all day, but we were able to come through when the time was right and land on the podium again. We got some good points. The track was definitely tough tonight; it was pretty tricky. It was hard to find a flow out there, but I did the best I could. Knocked off some consistent laps, rode smart and ended up with a good result." 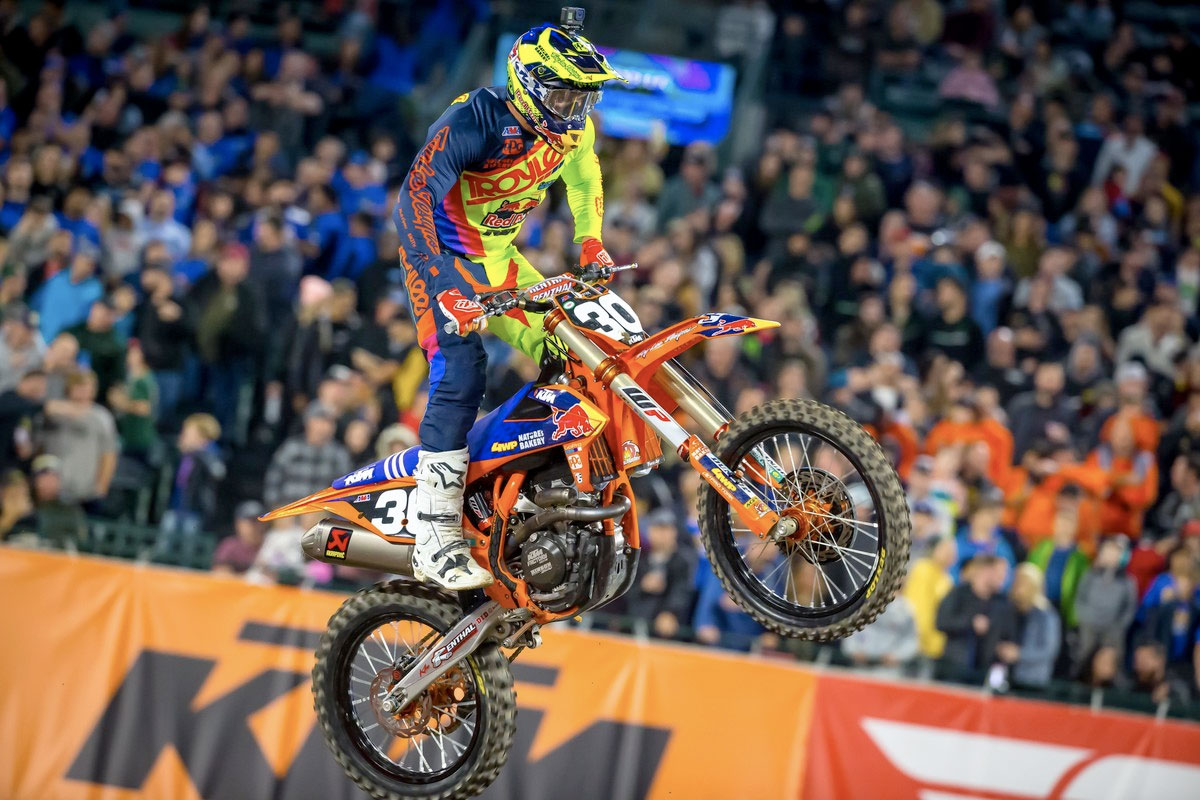 Brandon Hartranft raced his way to a second-straight podium with another impressive third-place ride. Photo: Simon Cudby
From an Australian point of view, Luke Clout had a good start in his heat race, running fifth until coming up short on a small jump before the finish line which dropped him back to twelfth and a trip to the LCQ. Aaron Tanti qualified straight through the same heat race as Clout with a solid seventh. Clouts Penrite Honda team-mate Mitchell Oldenburg finished second in the same heat race as Clout and Tanti. Jett Lawerence had his best heat race finish second in 250SX class heat two after an impressive charge from fifth against some of the best. Jay Wilson had a good return to racing after sitting out the previous round, finishing seventh in the same heat. Clout made it into the main via second in the LCQ. 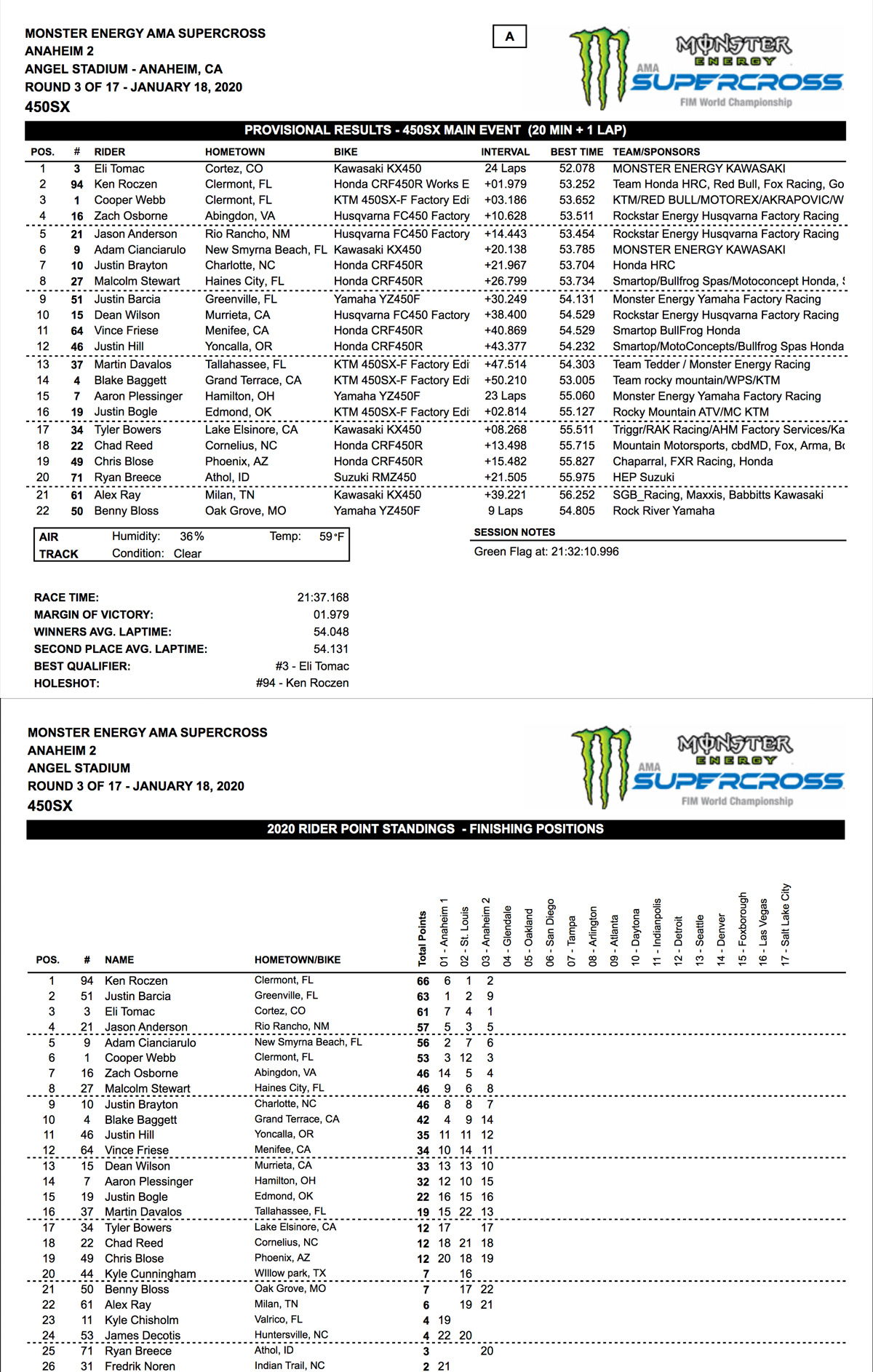 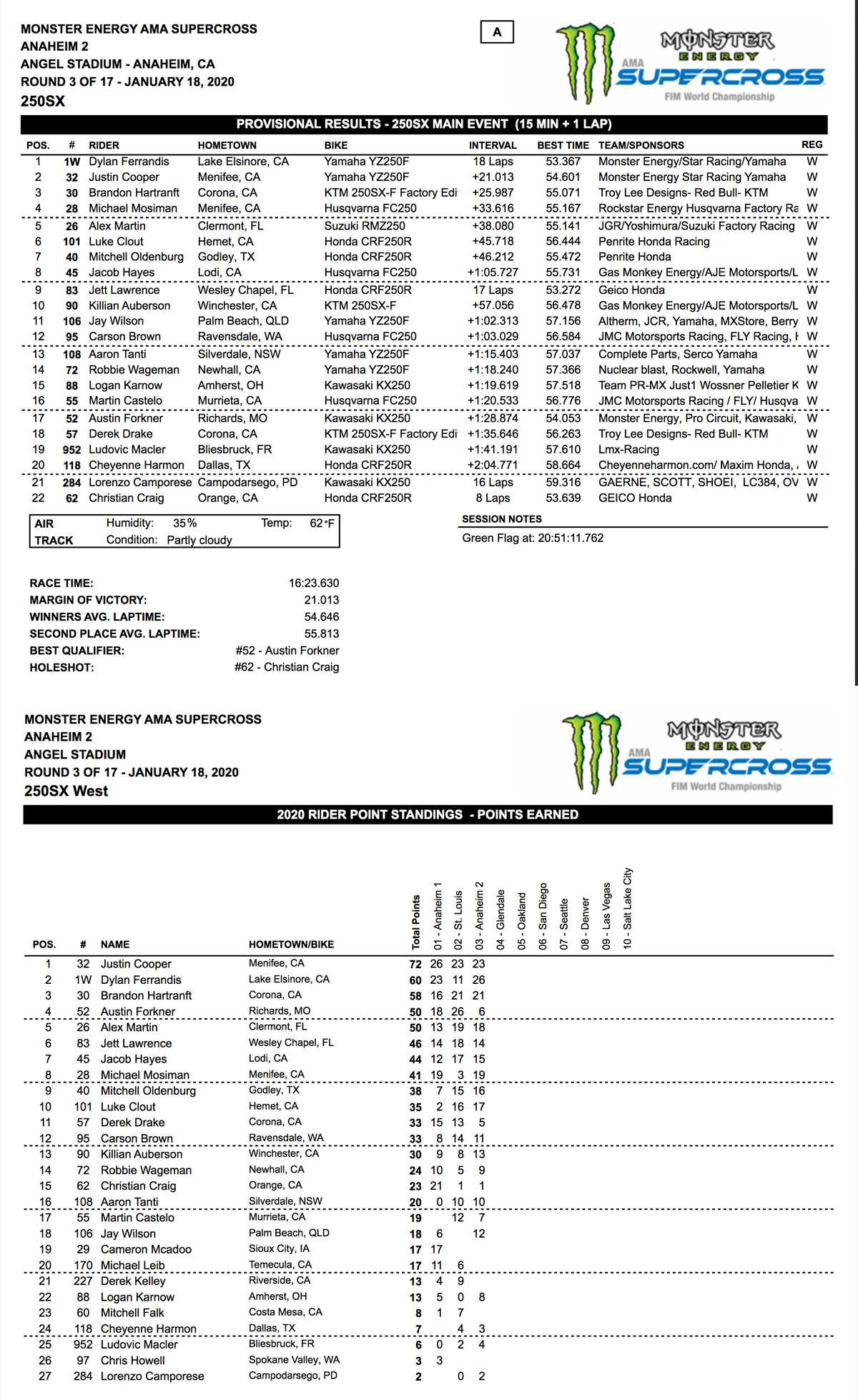