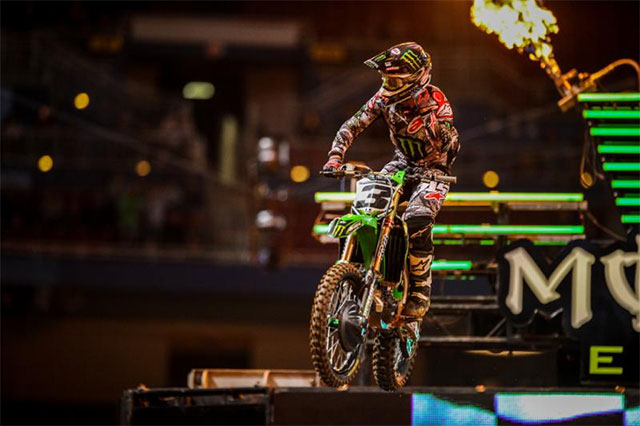 Monster Energy AMA Supercross, an FIM World Championship, made its annual visit to the "Gateway to the West" on Saturday night, with a crowd of 53,049 on hand inside The Dome at America's Center for the 13th round of the 2017 season. 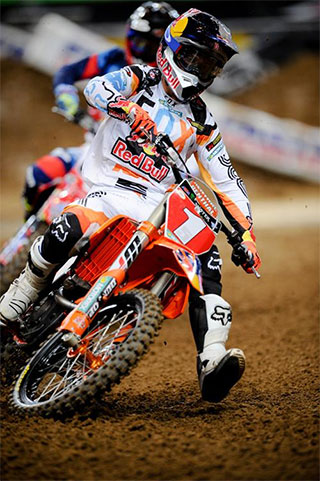 Ryan Dungey showed the speed to contend with Tomac, but had to settle for second. Photo: Feld Entertainment, Inc.
Dungey was ready for a showdown to start the 450SX Class Main Event, claiming the SupercrossLive.com Holeshot aboard his Team Red Bull KTM Factory Racing machine just ahead of Tomac. However, Tomac wasted little time in getting out front and made an aggressive pass on Dungey on the opening lap to take the lead. Dungey gave chase, while his Team Red Bull KTM Factory Racing teammate Marvin Musquin settled into third.

Tomac pushed the pace early to put some distance between he and Dungey, who was pressured heavily by Musquin. After fending off his teammate, Dungey set his sights back on Tomac and worked to erase the deficit. As the race passed the halfway point Dungey started posting quicker lap times than Tomac and got the gap down to less than two seconds.

With Tomac in his sights it appeared as though Dungey was going to make a late run on his rival, but as the leaders encountered lapped riders it was Tomac who took advantage, navigating through the back markers more efficiently. As Dungey spent multiple laps trying to get around lappers, in particular Monster Energy/Yamalube/Chaparral/Yamaha Financial Services/Yamaha Factory Racing's Chad Reed, he lost several seconds to Tomac.

The Kawasaki rider easily took his eighth win of the season, and the 12th of his career, by 6.7 seconds over Dungey. Musquin was third.

"I'm not giving up. It's all I can do. Just go out there and give it my best," said Tomac, who became the first rider since Ryan Villopoto in 2013 to win five races in a row. "Today was a little bit rough. I may not have shown it, but I didn't do a whole lot of good. I didn't get a good start in the Heat Race, but I nailed it in the Main Event and made the pass [for the lead] early. From there I tried to do what I could to open up some space, but Ryan [Dungey] was riding good and kept me honest the whole time. We just kept pressing on."

Dungey's runner-up effort was his championship-leading 11th podium result of the season, but he's been unable to keep pace with Tomac's recent run in which he's earned 172 of a possible 175 points the past seven races. 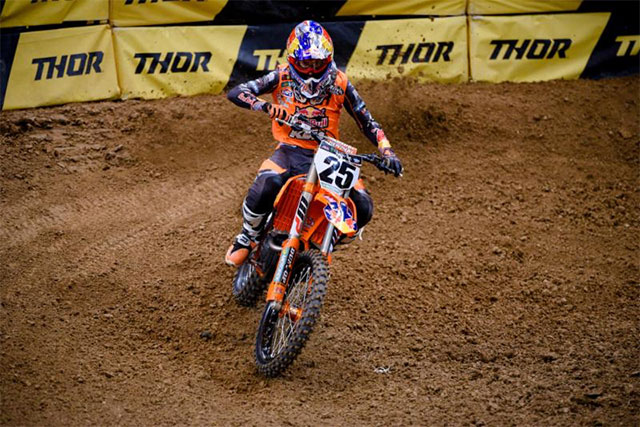 Marvin Musquin rounded out the 450SX Class podium. Photo: Feld Entertainment, Inc.
"I'm so excited about tonight. I felt like I rode awesome. You don't win them all sometimes, but I felt so good," said Dungey. "We were catching Eli [Tomac] a bit and I was really happy with my riding. He just got away there at the end. Overall, I'm really happy with tonight. Not disappointed at all. Of course I really want to win, but Eli's tough right now. He's riding really good. It's the challenge of racing, and pushing myself to be better. It's a good thing."

Just four points sit between Tomac and Dungey with four rounds remaining, after being separated by as many as 29 points earlier this season. Musquin is third, 49 points behind Dungey.

When the gate dropped on the Eastern Regional 250SX Class Main Event it was RMATV/MC-WPS-KTM's Dakota Alix who narrowly secured the SupercrossLive.com Holeshot over Savatgy, who then moved into the lead aboard his Monster Energy/Pro Circuit/Kawasaki, followed by Smith into second. Alix settled into third briefly, but then gave up the position to Kissimmee Motorsports Kawasaki's Gannon Audette. That early battle for third allowed Savatgy and Smith to pull out to more than five seconds ahead of the field. 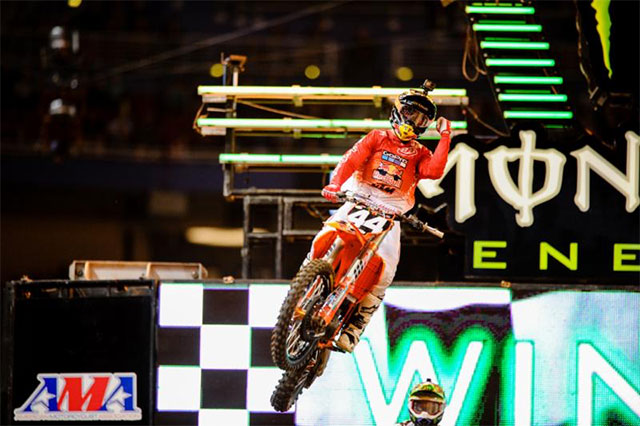 Jordon Smith took advantage of Savatgy's misfortune for the second straight weekend. Photo: Feld Entertainment, Inc.
While the lead pair asserted themselves out front, the battle for third intensified with Audette, Monster Energy/Pro Circuit/Kawasaki's Adam Cianciarulo, and Rockstar Energy Husqvarna Factory Racing's Zach Osborne. Cianciarulo and Osborne battled for fourth on Lap 3, with Osborne diving to the inside of the Kawasaki rider, taking his line, and moving into the position. He then made a charge on Audette for third and was able to move into podium position on Lap 4.

Out front Savatgy had established a comfortable multi-second margin over Smith, but he experienced a major bobble on Lap 7, forcing him off the side of the track. While he was able to avoid falling, Savatgy lost considerable time and ultimately dropped to second behind Smith, reentering the track with the KTM rider in sight. This sequence of events also allowed Osborne to close in from third, putting the top three within just bike lengths of one another.

Savatgy regained his composure and charged to the back fender of Smith, clearly the faster rider. However, Savatgy was forced to start his challenge over again after making contact with a lapped rider, which forced him to fend off a heavy challenge from Osborne for second. Savatgy withstood the challenge and pulled away from Osborne, once again closing on the back end of Smith as the time in the Main Event wound down. 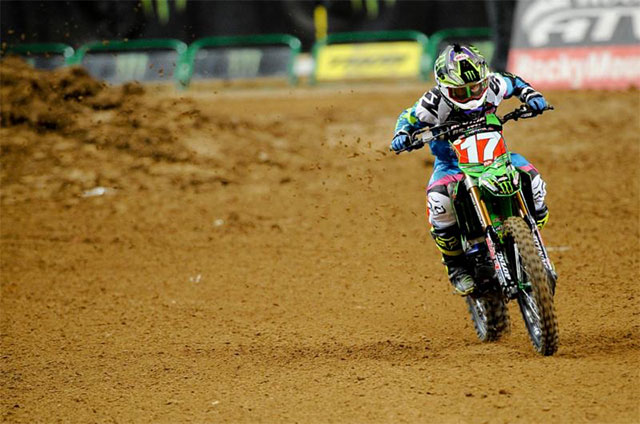 A resilient runner-up effort kept Savatgy in control of the championship. Photo: Feld Entertainment, Inc.
Just a couple bike lengths separated the lead duo over the closing stages and Savatgy made a major challenge on the final lap, diving to Smith's inside with a couple corners remaining, but ultimately it wasn't enough to get by. Smith crossed the line just four-tenths ahead of Savatgy.

"The racing this year has been crazy. The top five riders are so close," said Smith, who became the third 250SX Class rider this season to earn his first career win and follow it up with another victory. "[Tonight] it was about the start and minimizing the mistakes. The track was really tough. My team made some changes to my bike and they worked out great."

Savatgy's fourth straight runner-up finish is the third in a row in which he led laps but came up short of the win. Osborne rounded out the podium in third.

"We rode good and did what we had to do. I executed off the start, put ourselves in a good position [out front], and started to pull away," said Savatgy. "It seems like I want to just give these things away. I can't even begin to explain it. I'm frustrated, obviously. We'll go into the break, regroup, and come out swinging [at the next race]."

Savatgy maintained control of the championship lead with his second-place effort, but Smith closed the deficit to just six points. Osborne is third, 12 points behind Savatgy.

The Eastern Regional Championship will now take its lone break in action for the 2017 season, returning to the track at MetLife Stadium in East Rutherford, New Jersey, on Saturday, April 29.

The 2017 Monster Energy Supercross season continues next Saturday, April 8, for the 14th round of the championship and an anticipated return to Seattle's CenturyLink Field for the first time since 2014.