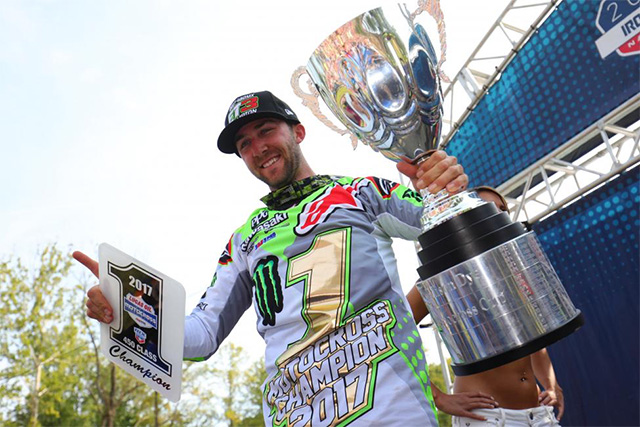 After entering the final round of the summer needing just 22 points in order to clinch the 450 Class title, Monster Energy Kawasaki's Eli Tomac did just that, overcoming adversity in both motos to come away with the most prestigious championship in the sport and hoist the Edison Dye Cup.

In the battle for victory on the track, Team Red Bull KTM's Jeffrey Herlings made the most of his visit to the U.S., showcasing his prowess en route to the 450 Class victory in his Pro Motocross debut, sweeping the afternoon's motos. In the 250 Class, Rockstar Energy Husqvarna Factory Racing's Zach Osborne cemented his championship-winning season with a dominant outing, going 1-1 for his series-leading fifth win.

As the 450 Class field stormed out of the gate to start its opening moto, Tomac put his Kawasaki at the front of the field by grabbing his first Motosport.com Holeshot the season just ahead of his main championship rivals, RMATV/MC-WPS-KTM's Blake Baggett and Team Red Bull KTM Factory Racing's Marvin Musquin. However, it was Herlings who stormed by Tomac and into the lead for the first time ever. Despite losing the top spot, Tomac's second place position would have been enough to clinch the title in the first moto, but he was determined to get back out front. 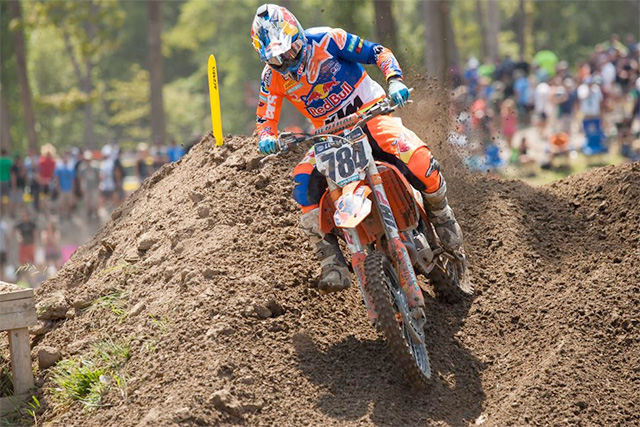 Jeffrey Herlings made a statement in his Pro Motocross debut, sweeping the 450 Class motos. Credit: MX Sports Pro Racing / Andrew Fredrickson
As Tomac attempted to challenge Herlings for the lead on Lap 1, he over-jumped an obstacle and crashed, dropping to sixth place, while Musquin moved into second and Baggett into third. Herlings, who currently sits second in the FIM MXGP Championship, took advantage of Tomac's misfortune to establish an early lead, but Musquin refused to quit. After facing a deficit of more than three seconds, Musquin started to chip away at Herlings' lead just past the halfway point. The Frenchman posted the fastest lap times of the moto to pull alongside his European counterpart, but a couple of small bobbles hindered his ability to attempt a pass on Herlings, who soon pulled away for good.

Herlings went unchallenged in the closing stages of the race to earn a moto win in his first attempt, crossing the line eight seconds ahead of Musquin, while Baggett followed in a distant third. Team Honda HRC's Cole Seely was fourth, one spot ahead of Tomac, which ultimately left the Kawasaki rider a single point shy of clinching the title.

The pressure-filled final 450 Class moto saw Blke Baggett emerge with the Motosports.com Holeshot, just ahead of Musquin and Seely. Herlings encountered misfortune and went down in the opening corners and was forced to start at the tail end of the field, while Tomac experienced difficulty jockeying for position and started outside the top 10.

Seely made an early challenge on Musquin for second, but the Frenchman withstood it and set his sights on Baggett. It didn't take long for Musquin to seize control of the moto, moving past Baggett and immediately pulling away. From there, the top three settled into their respective positions. 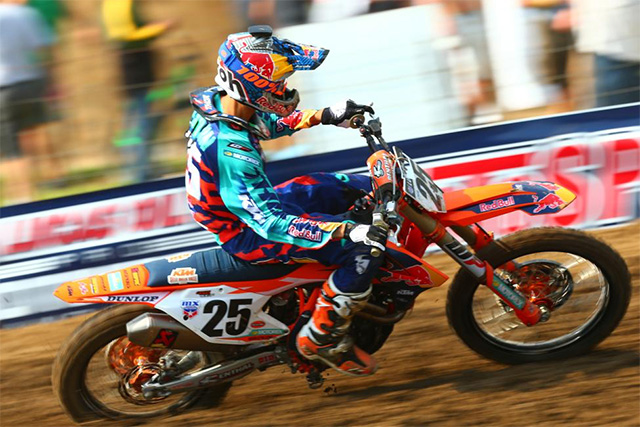 A crash late in Moto 2 forced Marvin Musquin to settle for second overall. Credit: MX Sports Pro Racing / Jeff Kardas
Behind the lead group, both Tomac and Herlings were fighting their way through the field, each breaking into the top 10 on Lap 2. Herlings was on an impressive march forward, passing Tomac for ninth on Lap 3 and then breaking into the top five on Lap 5. His charge wasn't done yet, as he eventually passed Seely for third on Lap 7. Herlings continued to post the fastest laps on the track, which allowed him to close in on Baggett in the waning laps. He made quick work of his fellow KTM rider and took over second on Lap 13, but still faced a deficit of nearly 10 seconds to Musquin.

While the Dutchman chased the overall victory, Tomac was content to manage points and ensure the title would be his, regardless of what his rivals did. He patiently worked his way forward, taking advantage of opportunities as they came, and soon settled into sixth place.

On Lap 14, the complexion of the moto changed dramatically when Musquin made an uncharacteristic mistake and crashed out of the lead. As he picked up his bike to reenter the track, Herlings stormed past into the lead. Musquin desperately gave chase, but with just two laps remaining the late mistake was too costly.

Herlings capped off a 1-1 sweep in his debut race by crossing the finish line 2.6 seconds ahead of Musquin. Baggett finished third.

Herlings became the 68th different overall winner in 450 Class history and is just the second Dutch rider to earn a Lucas Oil Pro Motocross Championship victory, joining Pierre Karsmakers. He's the fourth different rider to break through with his first career win this season, along with Musquin, Baggett, and Justin Bogle. 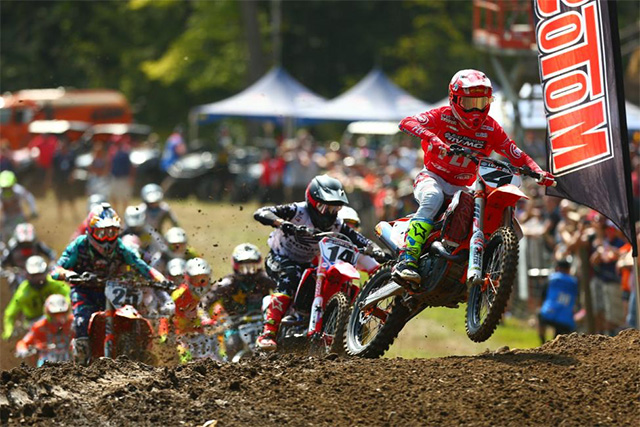 Blake Baggett (4) rode to a solid third-place finish on the heels of 3-3 scores. Credit: MX Sports Pro Racing / Jeff Kardas
"I was fastest all day, from practice to the first moto and the second moto," said Herlings. "I was so mad at myself for crashing in the second moto, so I just kept charging the entire time. I kind of got lucky that Marvin [Musquin] crashed there at the end, but it doesn't matter, I got a 1-1 and proved I was the best today."

Tomac's sixth-place finish in the second moto, and sixth overall (5-6), was enough to clinch his first career premier class title, making him the 24th different 450 Class Champion in history. He also becomes the just the 11th rider in history to win a national title in both the 250 Class and 450 Class.

"That was not easy at all. I went back after the first moto and thought ‰Û÷is it really going like this?' I think I let my ego get the best of me in the first moto and needed to take it all in before the second moto," said Tomac. "We went out there and did what we needed to do. This [championship] has been a long time coming and it feels amazing to finally accomplish it. I'm kind of at a loss for words right now."

Tomac finished the season with a 17-point lead over Musquin, who moved from third to second, in the final championship standings. Baggett was just an additional two points back in third. 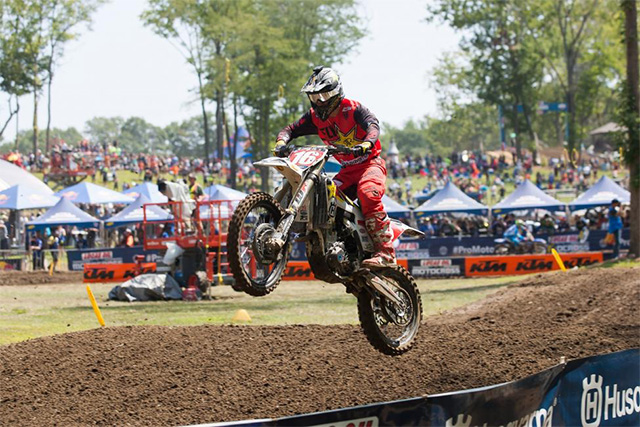 Zach Osborne cemented his championship-winning season with a dominant 1-1 effort for his fifth win of the season. Credit: MX Sports Pro Racing / Andrew Fredrickson
The first 250 Class moto saw GEICO Honda's Jeremy Martin take the Motosport.com Holeshot ahead of Rockstar Energy Husqvarna Factory Racing's Zach Osborne and Monster Energy/Pro Circuit/Kawasaki's Adam Cianciarulo. While Martin pushed the pace out front on the opening lap, Cianciarulo was able to make his way around Osborne for second and set his sights on the lead. Cianciarulo's early surge put him alongside Martin at the conclusion of Lap 1 and as they entered the final corner side-by-side, the pair made contact, which sent Martin to the ground. Cianciarulo continued with the lead, while Martin was forced to pick up his bike and remount in 12th place. Osborne slotted into second, while Troy Lee Designs/Red Bull/KTM rookie Sean Cantrell moved into third.

Cianciarulo and Osborne were able to open up a comfortable gap over the field, but Cantrell battled fellow rookie Chase Sexton for third, with the GEICO Honda rider getting the upper hand on Lap 2. Out front, Osborne was persistent in his pursuit of Cianciarulo, using an alternate line through virtually every turn on the track, and at the start of Lap 9 that determination paid off as Osborne dove to the inside of the Kawasaki and seized control of the moto. Cianciarulo attempted to mount a counter-attack, but Osborne withstood the pressure and started to pull away.

Another battle for third started to unfold in the closing stages of the moto between Sexton and Yamalube/Star Racing Yamaha's Colt Nichols. Sexton successfully fended off the initial challenge, chasing his first podium result, but saw his hopes of a career-best outing evaporate when he collided with a lapped rider, giving third to Nichols. 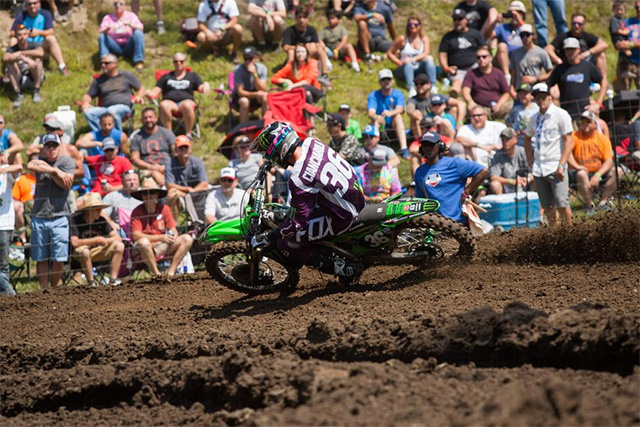 Adam Cianciarulo followed up his maiden victory last weekend with a strong runner-up effort. Credit: MX Sports Pro Racing / Andrew Fredrickson
Osborne continued to extend his lead and moved out to a double-digit advantage before taking his ninth moto win of the season, 9.1 seconds ahead of Cianciarulo. Nichols posted his first career podium finish in third. Yamalube/Star Racing Yamaha's Aaron Plessinger was fourth, with his teammate Mitchell Harrison in fifth.

The start of the second 250 Class moto saw Cianciarulo put his Kawasaki out front with the Motosport.com Holeshot, but Osborne quickly challenged him. The newly crowned champion attempted to make a pass for the lead, but Cianciarulo shut the door, which allowed Martin to pass into second. Osborne reclaimed the spot from Martin a short time later and brought Plessinger with him into third. Osborne's momentum brought him back onto Cianciarulo's rear fender, and he successfully took the lead on Lap 1. Cianciarulo then came under fire from Plessinger and lost his hold second, only to have Plessinger give the position back on the next lap after a crash took him out of the race. Plessinger's misfortune moved Martin into third, while Nichols continued his career-best effort to challenge from fourth.

With a clear track, combined with the battles going on behind him, Osborne opened a gap of nearly seven seconds after just three laps, which he continued to build on past the 10-second mark. Cianciarulo was able to assert himself into second, leaving the battle for third to continue between Martin and Nichols. While the lead duo stabilized their positions on the track, Nichols picked up his pace in the late stages of the moto and made the pass on Martin for third on Lap 11, but Martin waited until the final lap to mount one final challenge, re-passing Nichols to get back onto the podium.

Osborne capped off his championship-winning breakout season the same way he started it, sweeping the motos after crossing the line 8.3 seconds ahead of Cianciarulo. Martin edged out Nichols for third. 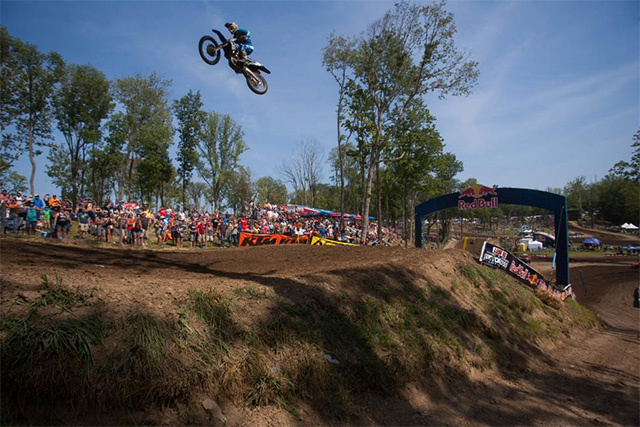 Colt Nichols enjoyed the best outing of his career to earn his first podium result. Credit: MX Sports Pro Racing / Andrew Fredrickson
Osborne's second 1-1 outing of the summer highlights an exceptionally consistent season in which he earned five wins and finished on the overall podium at 11 of 12 rounds. Cianciarulo followed his first career win from one week ago with a second straight podium result (2-2), finishing his season on a high note. Despite missing out on another podium result in the final moto, Nichols still captured his first career overall podium finish in third (3-4).

"It was a really good day. I just wanted to make it easy on myself," said Osborne. "I've fought enough this summer so I didn't want to do that to myself again today. Everything worked out about as well as it could and it was amazing to end the year like that."

Osborne finished the 2017 season with an 81-point advantage over Martin, who secured the runner-up spot, while Cianciarulo's strong finish to the summer carried him to a career-best third in the final standings, 127 points behind Osborne.

The 2018 Lucas Oil Pro Motocross Championship will begin the third weekend in May, with the landmark 50th running of the Hangtown Motocross Classic in Rancho Cordova, California.