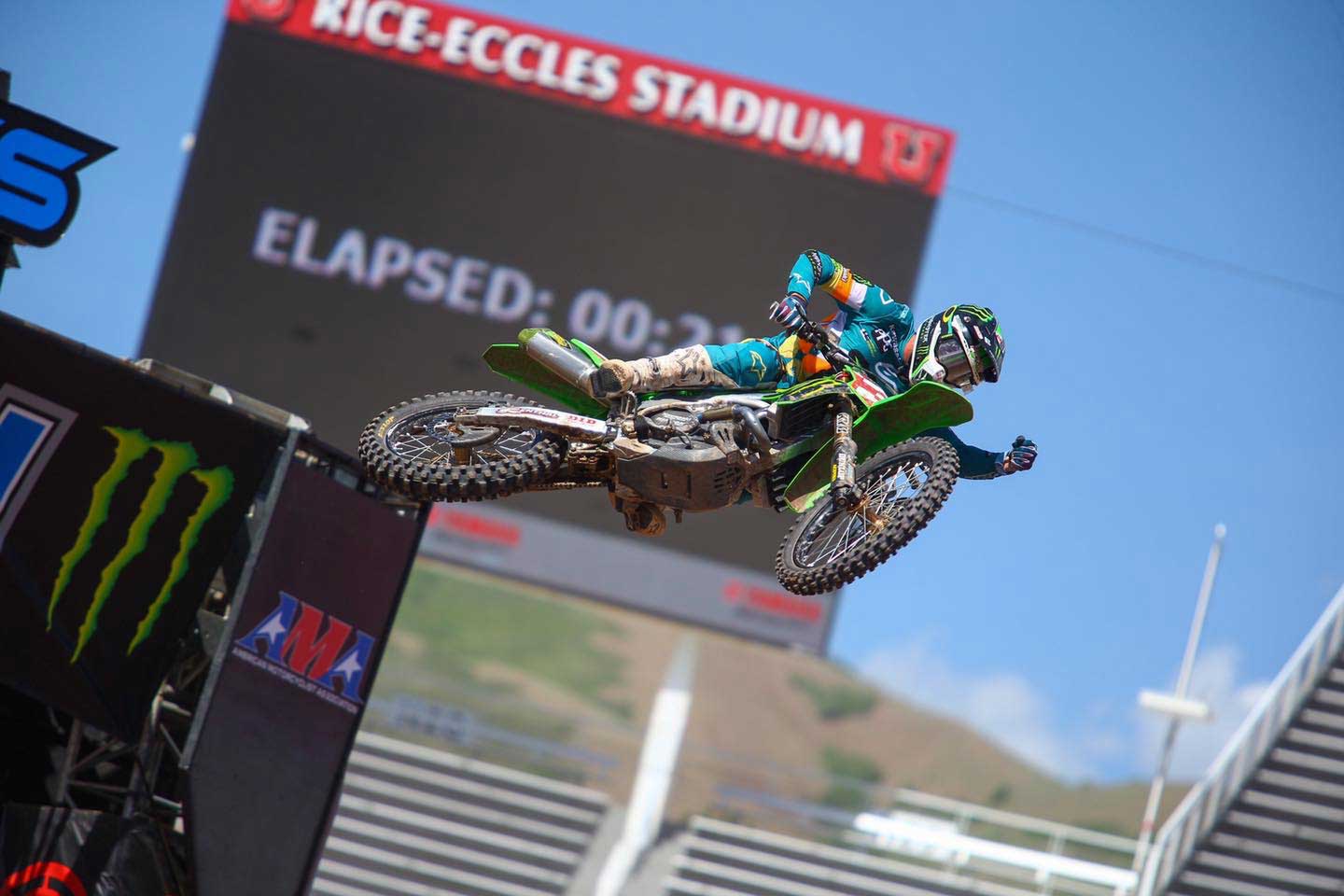 Eli Tomac won his heat race and the 450SX main event to extend his championship lead. Photo: Supercross Live
Eli Tomac has extended his 450SX championship lead after taking the round win in the resumed 2020 Monster Energy AMA Supercross season as riders got back to business at Rice Eccles Stadium in Salt Lakes City, Utah.

With racing ceasing eighty-five days ago due to the Coronavirus pandemic the season resumed to empty stands and daylight racing as the championship now aims to wrap up the season with seven rounds over the next three weeks at the same venue.

Tomac took the win ahead of defending champion Red Bull KTM's Cooper Webb and closest rival going into the round HRC Honda's Ken Roczen. In the 250SX East class Shane McElrath had the perfect day when he qualified fastest, took his heat win and then went on to win the main event. Championship leader going into the round, Chase Sexton finished second while Daytona winner Garrett Marchbanks rounded out the podium.


It wasn't the perfect start for Tomac as he had to overcome holeshot winner Blake Baggett, Monster Energy Kawasaki team-mate Adam Cianciarulo and Justin Brayton, who all got off to a good start. Championship contender Ken Roczen was running eighth by the end of lap one and not too far off the pace. Cianciarulo had a massive crash before the completion of lap one after coming up short in a rhythm section and going over the bars; both Tomac and Copper Webb ran over him and would take no further part in the race. 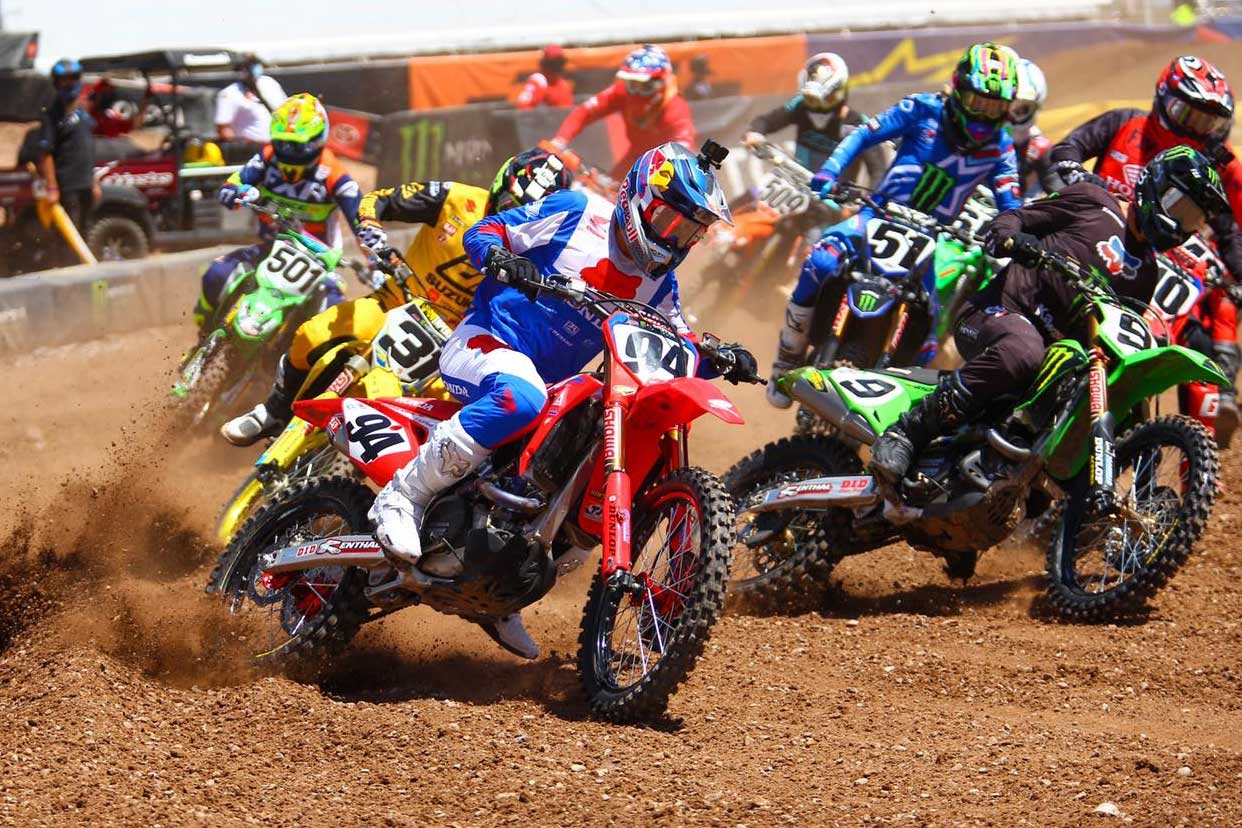 Ken Roczen finished third but only dropped to eight points from Tomac in the championship chase. Photo: Supercross Live
Brayton, Webb and Roczen all tussled early for second position that at one stage saw Tomac drop to fifth. But there was a lot of racing left with sixteen minutes still on the clock. As Tomac settled in, he started to carry more momentum and worked his way past Webb and Brayton and set out after Baggett with half the race still to run.

With twelve minutes to go, Tomac got by Baggett and took the lead. Webb and Roczen ran second and third respectively until the flag, Roczen surviving a small run-in with the tough blocks. Justin Barcia came through for fourth ahead of Jason Anderson in fifth. Australia Chad Reed, who was KTM mounted, pulled off the track mid-race and recorded a DNF.

"That was huge for us," Tomac said of the win. "It's so cool we get to go back racing here in Salt Lake City, and we can get back to racing and racing and do what we know. Overall it was an awesome day, but the track got really slick at the end with lots of dust flying and hunting for traction. I was a little slow early on so I gotta improve on that next time. Overall it was a really good day for points." 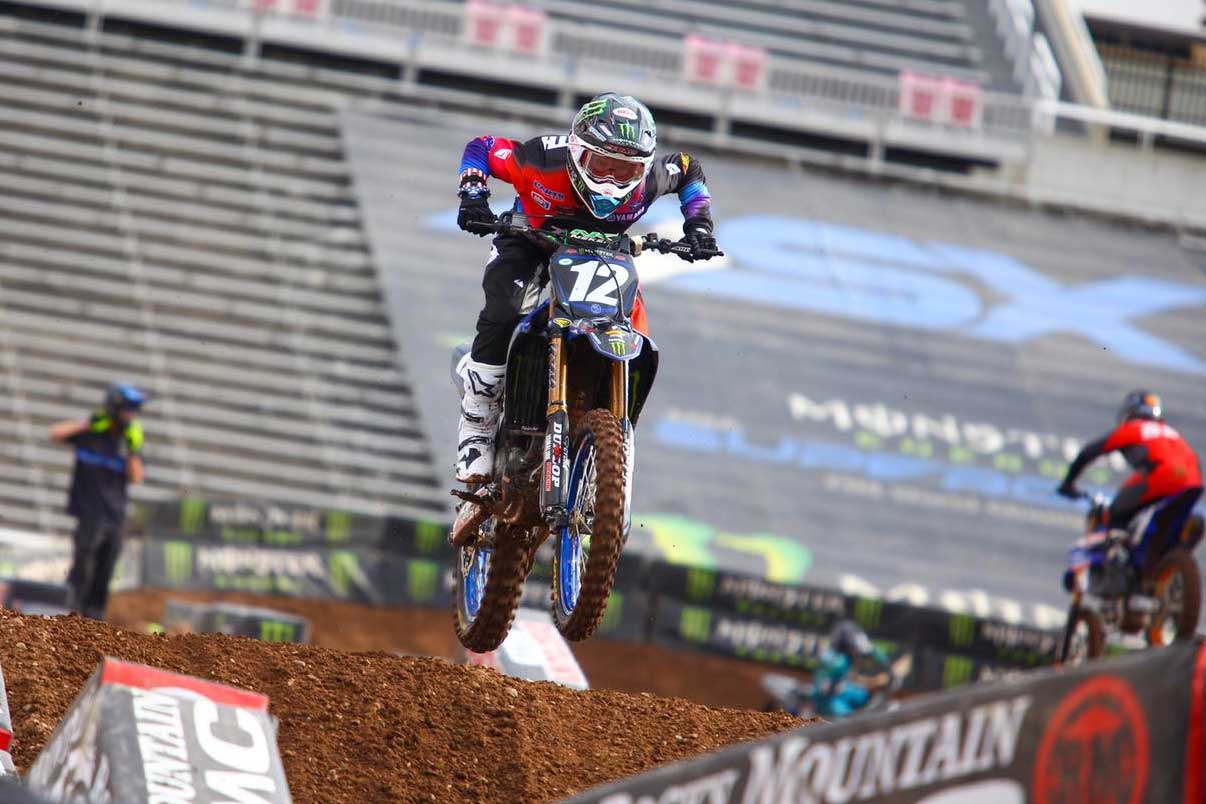 Shane McElrath had the perfect day qualifying fastest, winning his heat race and then going on to win the 250SX East Class main. Photo: Supercross Live
The 250SX East Coast class saw Monster Energy Star Racing Yamaha's Shane McElrath take the holeshot with Geico Honda's Chase Sexton in tow. As the fifteen laps reeled off, positions didn't change with Championship leader Sexton unable to mount a challenge. McElrath eventually going on to take his second win of the season and cut the points gap to Sexton from ten to seven in the championship chase. Local rider Garrett Marchbanks and Gieco Honda Factory Connection's Jeremy Martin disputed third place early in the race until Marchbanks took control of the position for the final podium spot. Martin was fourth with Troy Lee Designs KTM's Pierce Brown impressing making his way from twenty-first at the start to fifth by the chequered flag. 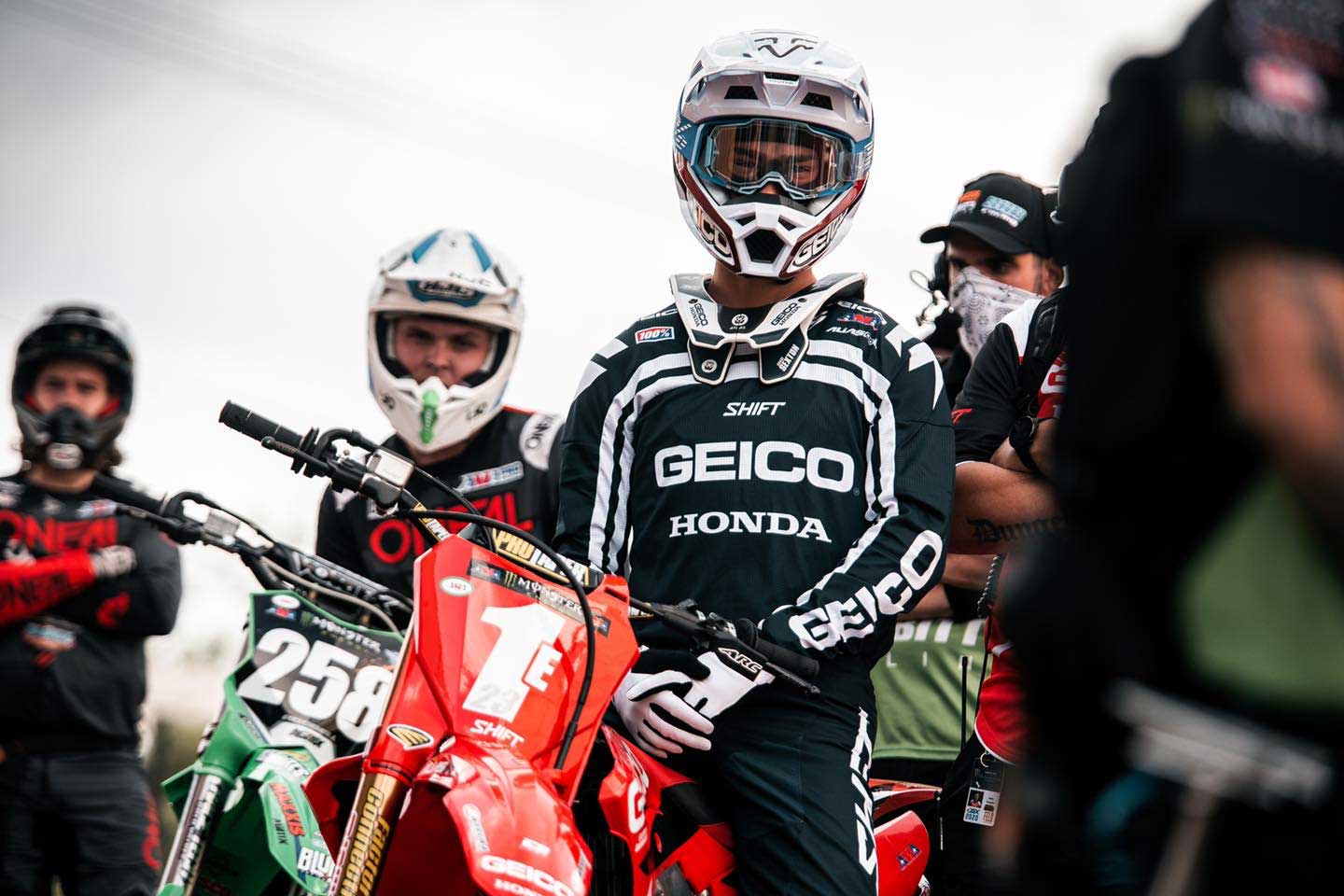 Second place in the 250 East Coast class was enough to see Chase Sexton retain his lead in the championship. Photo: Supercross Live
"The season has been a big learning curve for me, and our results don't show the progress we made, and now I have gotten to spend another eighty-five days since our last race on this bike and working with the team and making changes," McElrath said after the race. 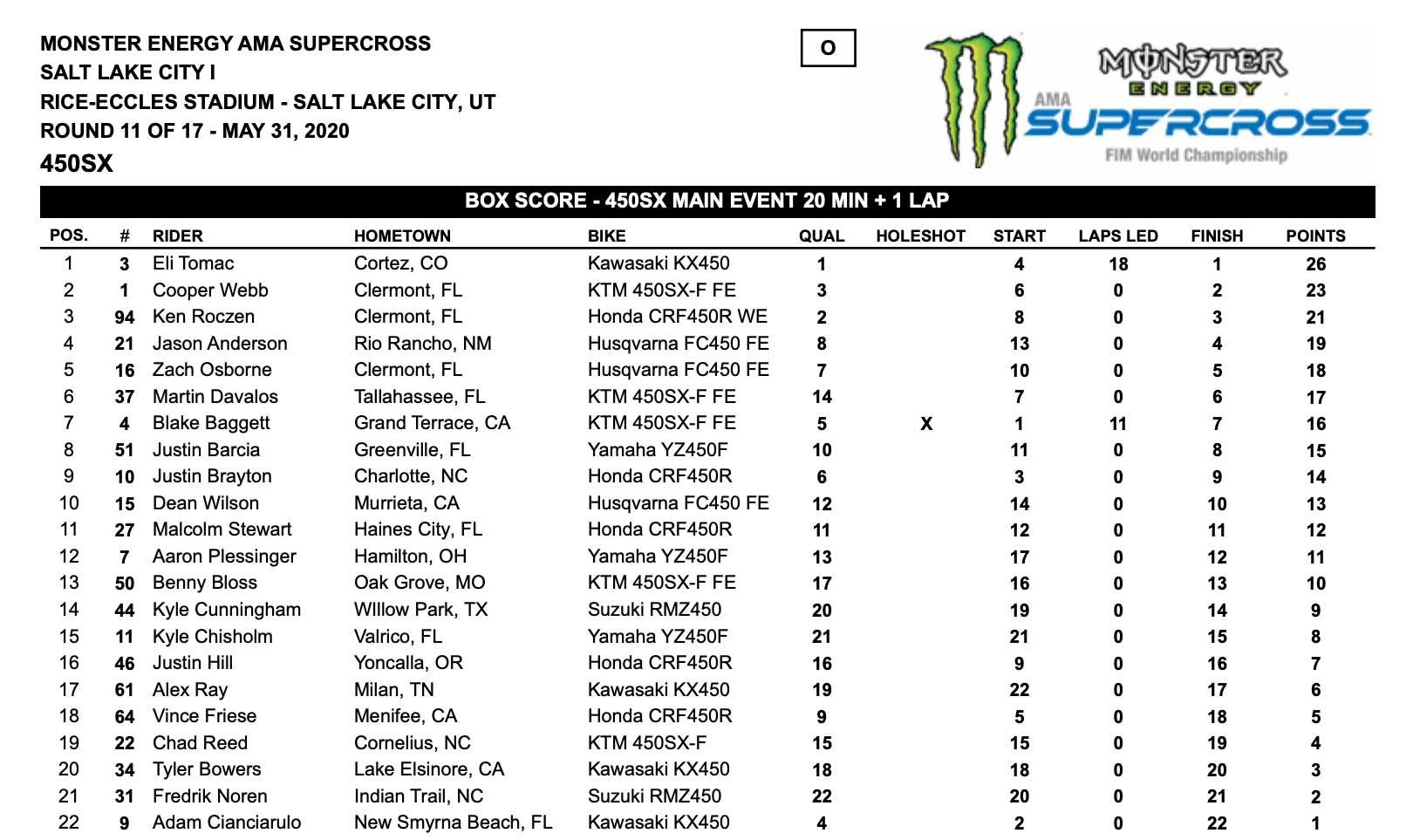 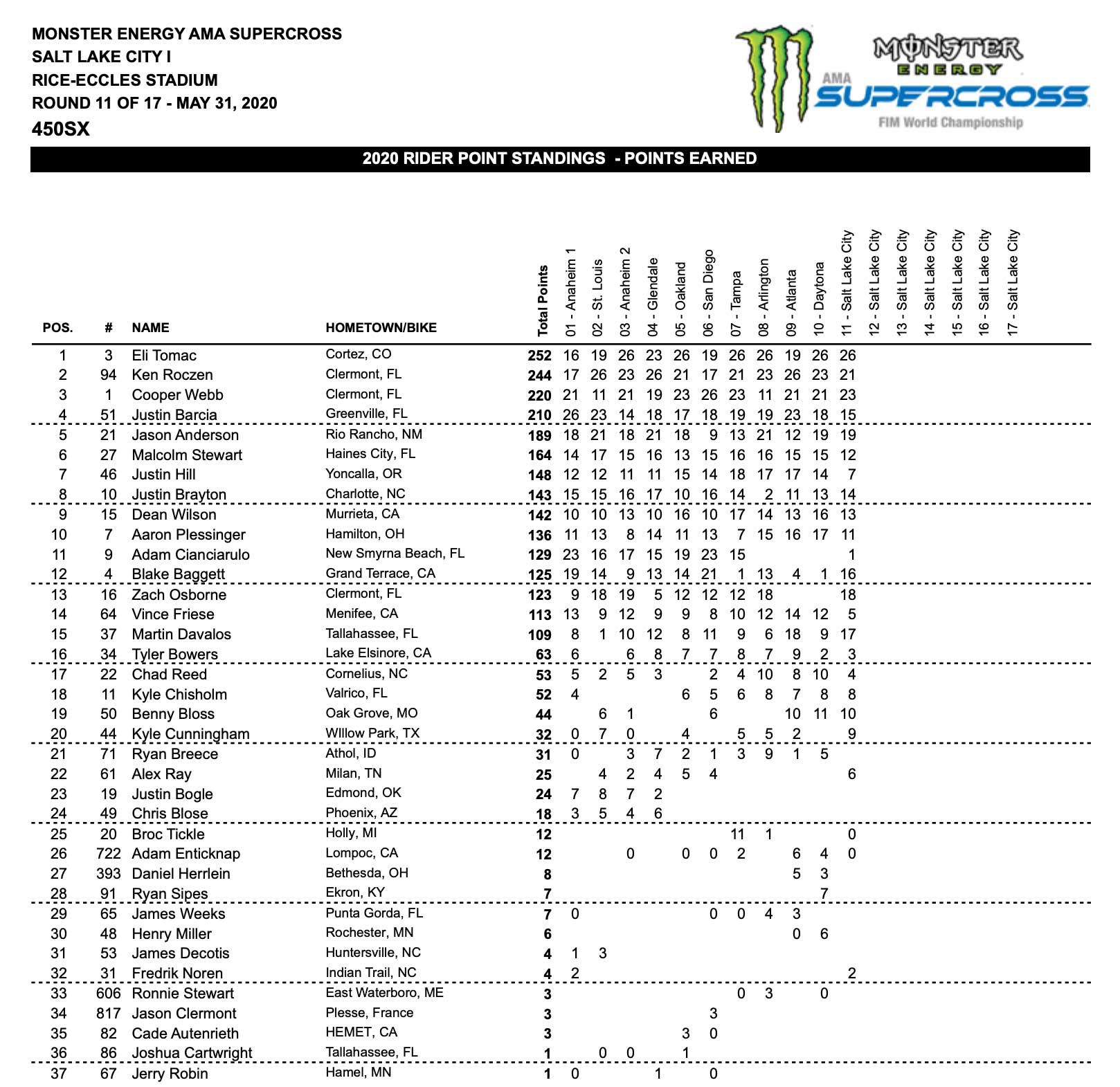 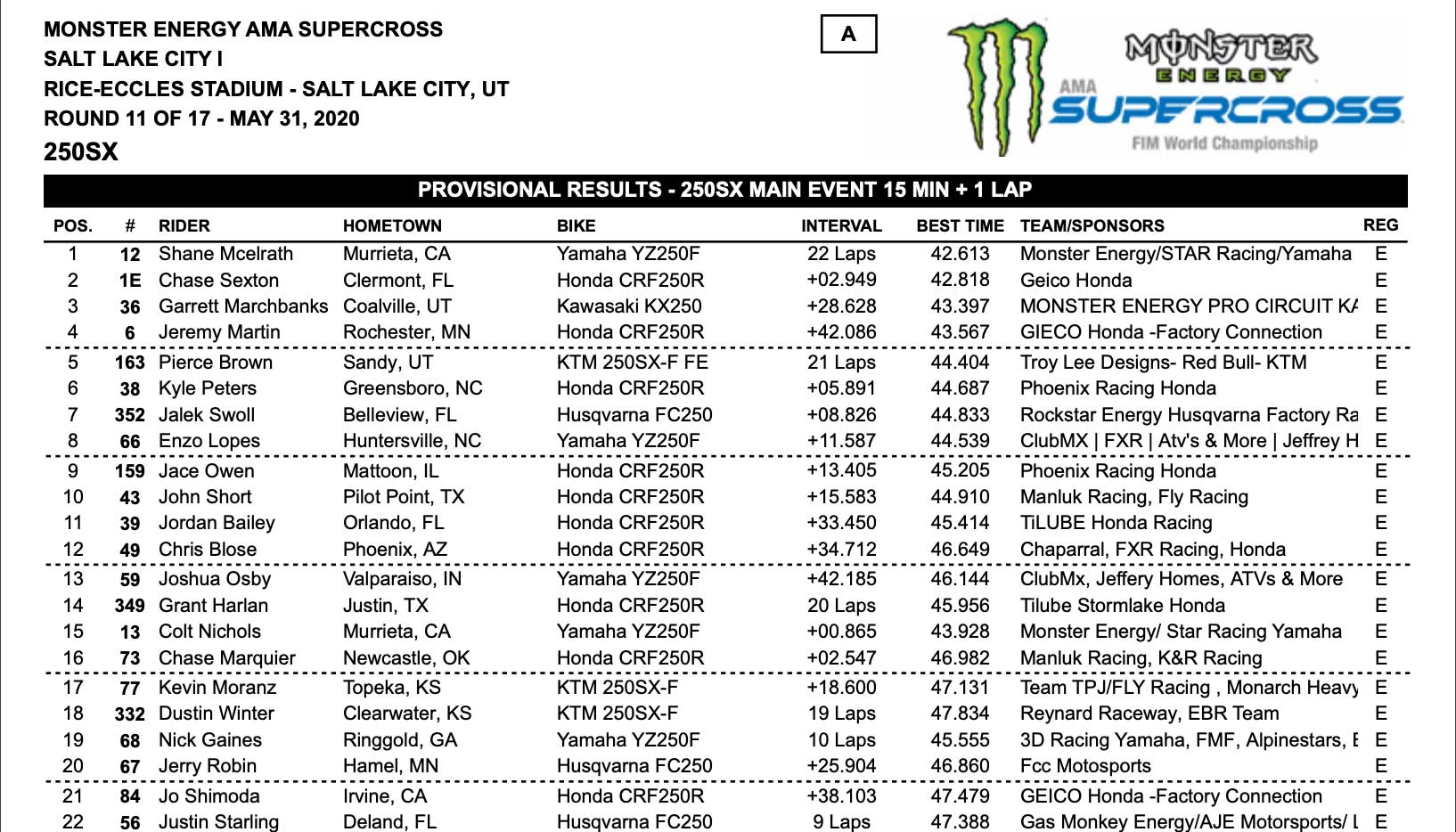 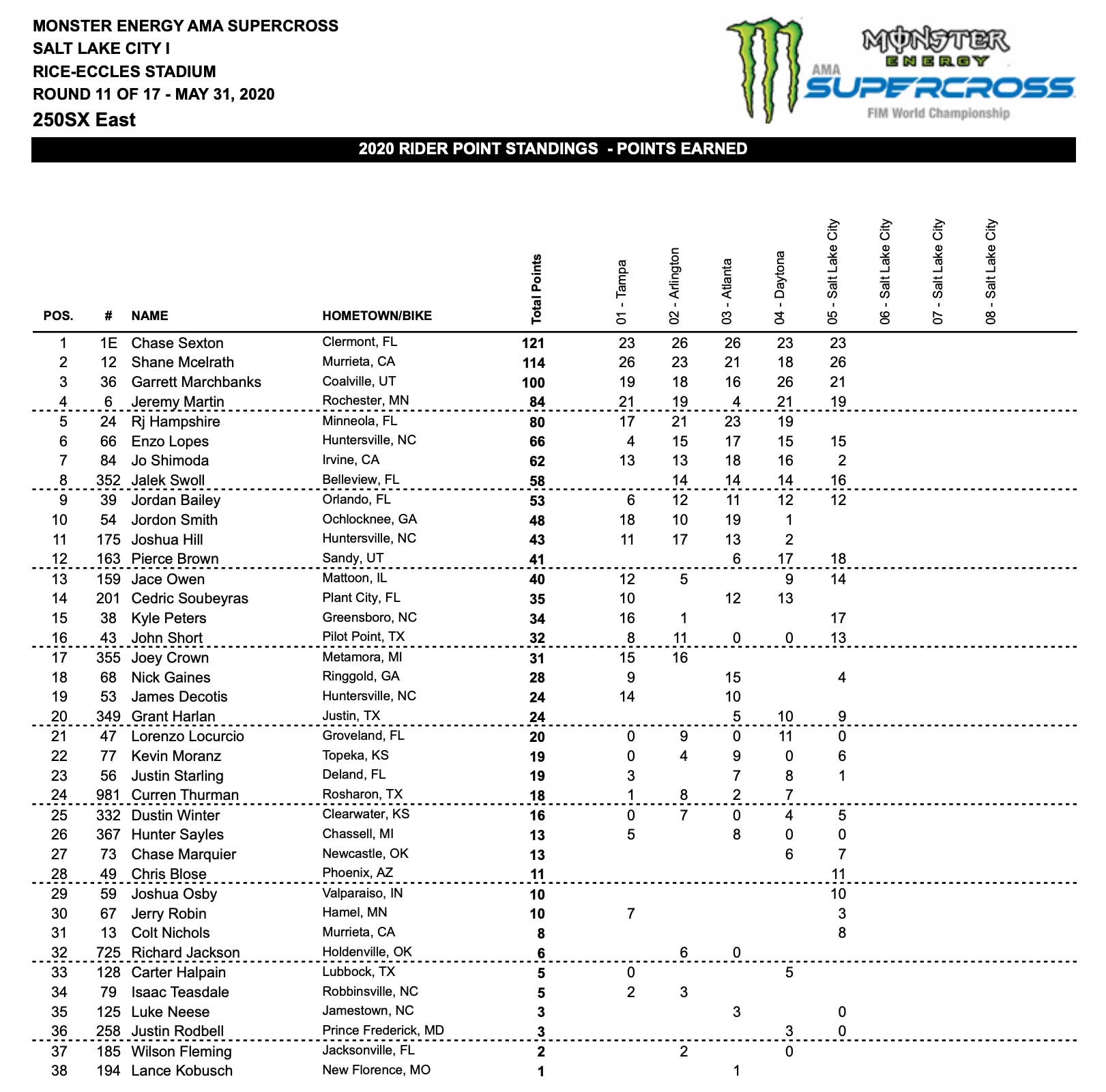