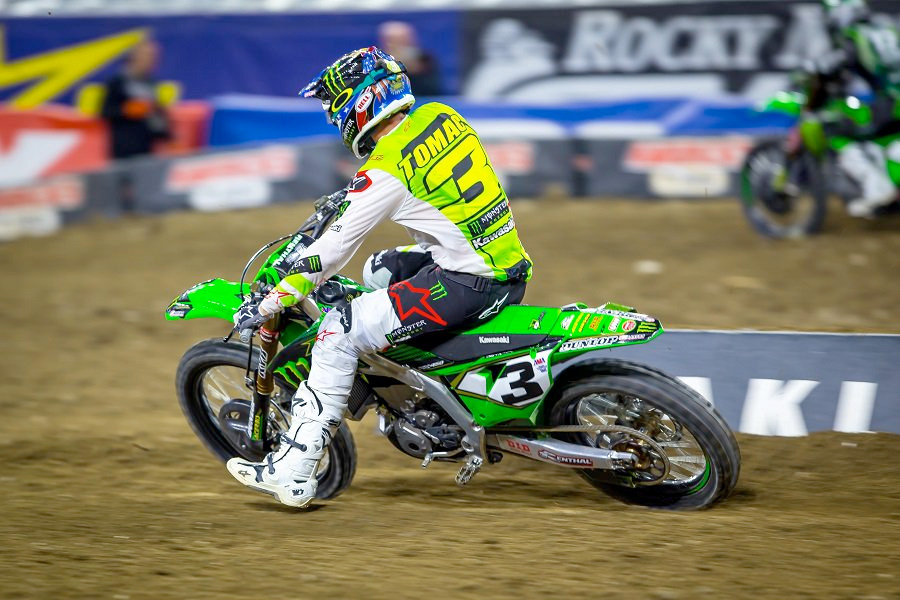 Eli Tomac won the first two races but faltered in the third, he came back from 12th to 6th to win the overall. Photo: Feld
Round eight of the Monster Energy AMA Supercross Championship saw the second round of the Triple crown format run at Ford Field, Detriot, Michigan with Eli Tomac and Austin Forkner giving Kawasaki a clean sweep in the 450SX and 250SX East coast classes respectively.

Eli Tomac went 1-1-6 in the 450 class to get his season back on track while Red Bull KTM's Cooper Webb maintained his championship lead via a second place finish. Aussie Chad Reed was once again on the podium with third overall. Main championship contender Ken Roczen was not at his best but still managed a fourth overall. In the 250SX class Austin Forkner, who has not lost a race since the 250SX East Coast class kicked off two rounds ago maintaines his championship lead with another unbeaten round and also became the first rider to ever sweep the triple crow format.

Brayton was comfortable out in front for the first seven laps while Reed had claimed second and settled in ahead of Baggett in third. Things got more interesting at lap nine of the seventeen with Roczen, Tomac and Barcia charging up to the front runners. The man on the mission though was Tomac who had charged his way up from 11th on the opening lap. The Monster Energy Kawasaki rider methodically demoted his opposition one by one to overtake Brayton for the lead on the second last lap. Brayton crossed the line just over two seconds behind while an impressive Reed took third. Baggett held onto fourth while Roczen held of Webb, who looked to struggling with pace, for fifth.

Red Plate holder Webb took the holeshot in moto two with Joey Savatgy, Dean Wilson, Musquin and Tomac hot on his heels. Race one holeshot winner Brayton was back in 7th one spot behind Reed. Roczen and Barcia once again battled just inside the top ten. The opening five laps saw things remain steady before Tomac started his charge to the front, firstly taking his team-mate Savatgy for second and then Webb for the lead. Musquin put on a charge but ran into the back of Savatgy and crashed and had to go back to square one. By the chequered flag, Tomac held his five second gap over Webb to take his second win, Webb looked much better than the opening moto to claim second while Savatgy held of a persistent Musquin and Reed, who all crossed the line within a bike length, to claim the final podium spot. Roczen rounded the race out in sixth ahead of Barcia and Zach Osborne. 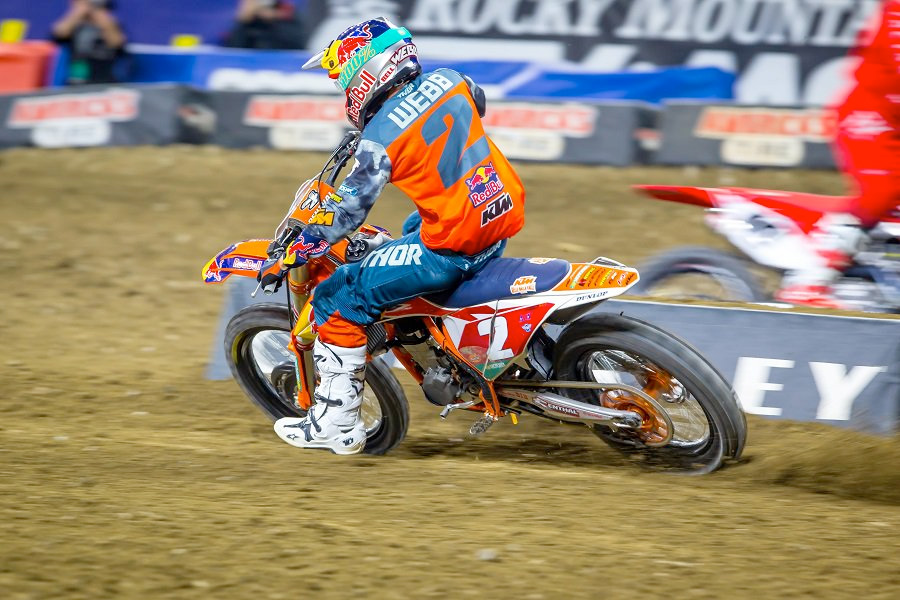 Championship leader Cooper Webb improved all night to win the final moto but missed the overall by a single point. Photo: Feld
Blake Baggett took the holeshot in the final moto with Savatgy, Wilson, Barcia and Webb close behind. The big news was Tomac back in tenth! Out front Bageett was busily fending off Barcia while Webb was setteld in third folowed by Wilson, Savatgy, Roczen and Reed. With situation as it ran Webb was inline for the round win and Tomac had a lot of work to do to get back on top.

Positions upfront remained the same by half race with a lot of close racing as all eyes were on Tomac. On lap ten Barcia made the move on Baggett for the lead as Tomac moved up to seventh and closer to the overall win. Webb made the move past Baggett for second to put even more pressure on Tomac as the overall round win was between those two. Webb needed to get by Barcia to earn maximum points and hope Tomac's charge through the field would stall. Tomac made the pass on Reed to move into sixth and take the overall lead with two laps to go. Webb did all he could by taking the lead from Barcia which tied the riders for the lead. Tomac was dropping fastest laps to charge forward. Luck was with Tomac as Dean Wilson crashed giving him another place for free and now into the points lead. In the end, Webb took the win, but Tomac was able to make his way back to sixth, giving him enough points him the overall win by a single point. Baggett finished second for the moto ahead of Barcia. Then it was Musquin, Roczen and then Tomac.

It almost slipped away for Tomac but at the end of the night he was happy with his performance and to get maiximum points.

"What really got me in that final moto was when I went off the track on lap to or three and I had to go around a tough block and missed a double which shuffled me way back, that really put me in a pressure cooker, I thought, am I really doing this right now," Tomac explained after the race. "I got my head back in it and made the charge back. I was watching the points gap, and my mechanic was doing a good job of giving me the positions. We are in such a better spot than we were, I just felt more like me tonight" Tomac concluded.

"I was struggleing earlier, trying to reinvent the wheel, change the bike, do this, do that, and wasn't riding like myself and wasn't focused like i should have been. Like the old saying if ain't broke don't fix it," Webb explained. "I went back to original setting for the last one and wouldn't you know it, thats the best settings!"

In one of his favourite hunting grounds, he has won here more than any other rider, Aussie Chad Reed found himself back on the box for the 132nd time with third overall.

Asked what he put his night down to Reed said, "Honestly, just starts and finally riding to your ability. It's been a long time. For the guy who's stood up here more than anyone else in the history of the sport, I take it on personally and feeling less about myself and not getting up here. It feels so rad to be up here. I am really, really, proud and honoured to racew this JGR Suzuki; it's been a lot of fun." 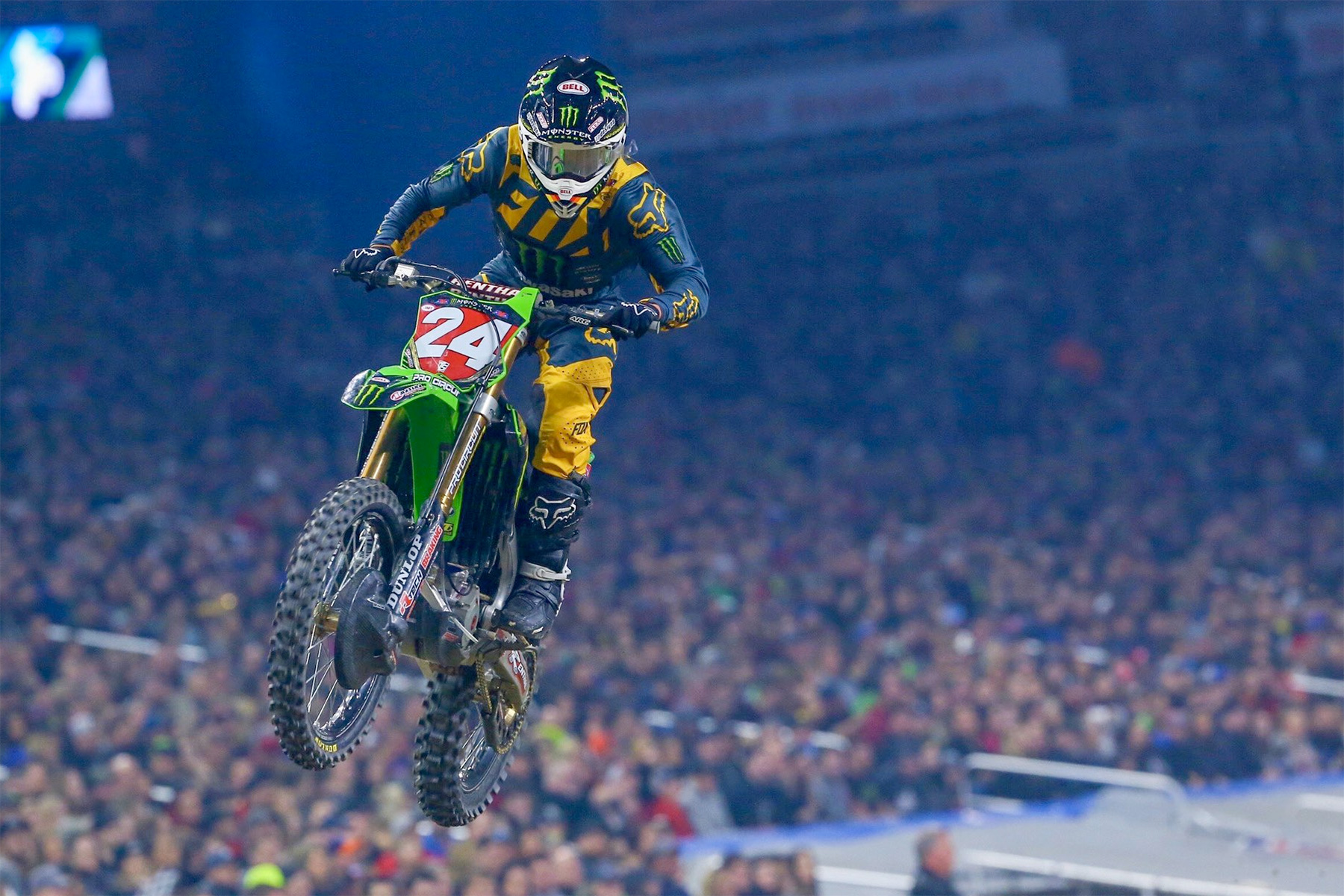 Austin Forkner has still not lost a race in 2019 and became the first rider ever to clean sweep a triple crown. Photo: Feld
250SX East Coast Championship leader Austin Forkner took the holeshot in the first ten minute moto with the Monster Energy Pro Circuit Kawasaki rider circulating unchallenged for the fourteen laps to remain undefeated so far in 2019. TLD Red Bull KTM's Jordon Smith and fastest qualifier Chase Sexton were the only two to battle with the duo waging a race-long battle for the runner up spot. Sexton looked to have second in the bag but ran off the track a few corners from home allowing Smith through to take the runner-up spot. Monster Energy Yamaha Racing's Justin Cooper, who had run in fourth for the whole race inherited third while Sexton recovered for fourth. Martin Davalos, Mitchell Oldenburg and Brandon Hartranft rounded out the top six.


Race two saw Smith take the holeshot, but moto one winner Forkner only took two turns to hit the front. Smith was left to battle with the JGR Factory Suzuki's duo of Kyle Peters and Alex Martin while Davlos waited in the wings, the Monster Energy Pro Circuit rider quickly demoting Peters and taking over third. Front runner Sexton got off to a lousy start in ninth but worked his way back to sixth by lap five. Davlos quickly dropped off the pace as the battle for second between Martin and Smith heated up towards the end. Smith was too strong in the end and claimed the second position. Sexton made his way to fourth, despite almost throwing it away on the last lap. Monster Energy Star Racing's Justin Cooper held off team-mate Mitchell Oldenburg for fifth with Davalos and Peters sixth and seventh respectively. 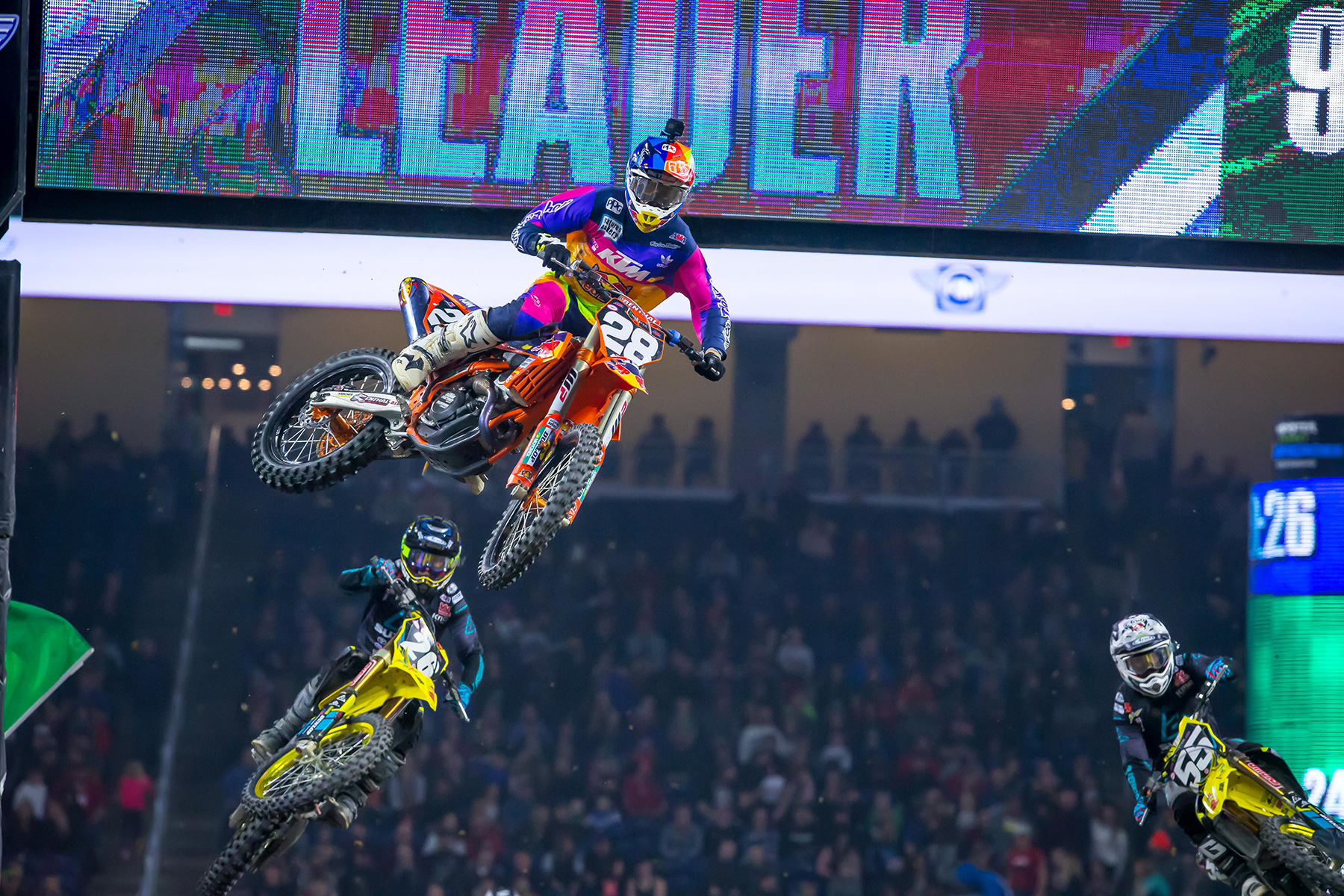 Jordon Smith went 2-2-4 to take second place and now sits in second in the overall 250SX East Coast standings. Photo: Rich Shepherd
With the first-ever clean sweep of the Triple Crown format on the line Forkner showed he was the man for the challenge taking an emphatic holeshot ahead of Sexton and Davlos in moto three. Smith and Martin rounded out the top five in the early laps. From there positions remained the same for most of the race. Cooper worked his way past Davlos to move into fourth as the race headed to its conclusion. As the chequered flag flew on the final 250SX moto, it was Forkner with three in a row. Sexton rode the whole moto in second. Smith looked to have third sewn up until Cooper railed a berm on the last lap to grab the spot. Cooper was fifth ahead of Martin and Peters. Forkner becoming the first rider to sweep the Triple Crown format.

"My starts were dialled all night, the last start was the best one I had, and I knew I had it like five feet out of the gate, I got such a good jump," Forkner explained. "My bike is the best it's been this year as far as fast, handling; it's just the complete package right now. It makes my life easier."

"If I can get starts like that after how the first couple of races went, I was confident I didn't think anybody could catch me. The was the Minneapolis me, not the Dallas me today. Dallas me was a little too worried about what was going on behind me and today I was like, I'm not going to do that I was like I'm going to get out front and push ahead and not looking back, it doesn't matter, I'm just going to ride as fast and hard as I can."

Round nine of the championship now moves to Mercedes-Benz Stadium in Atlanta next weekend, March 2nd. 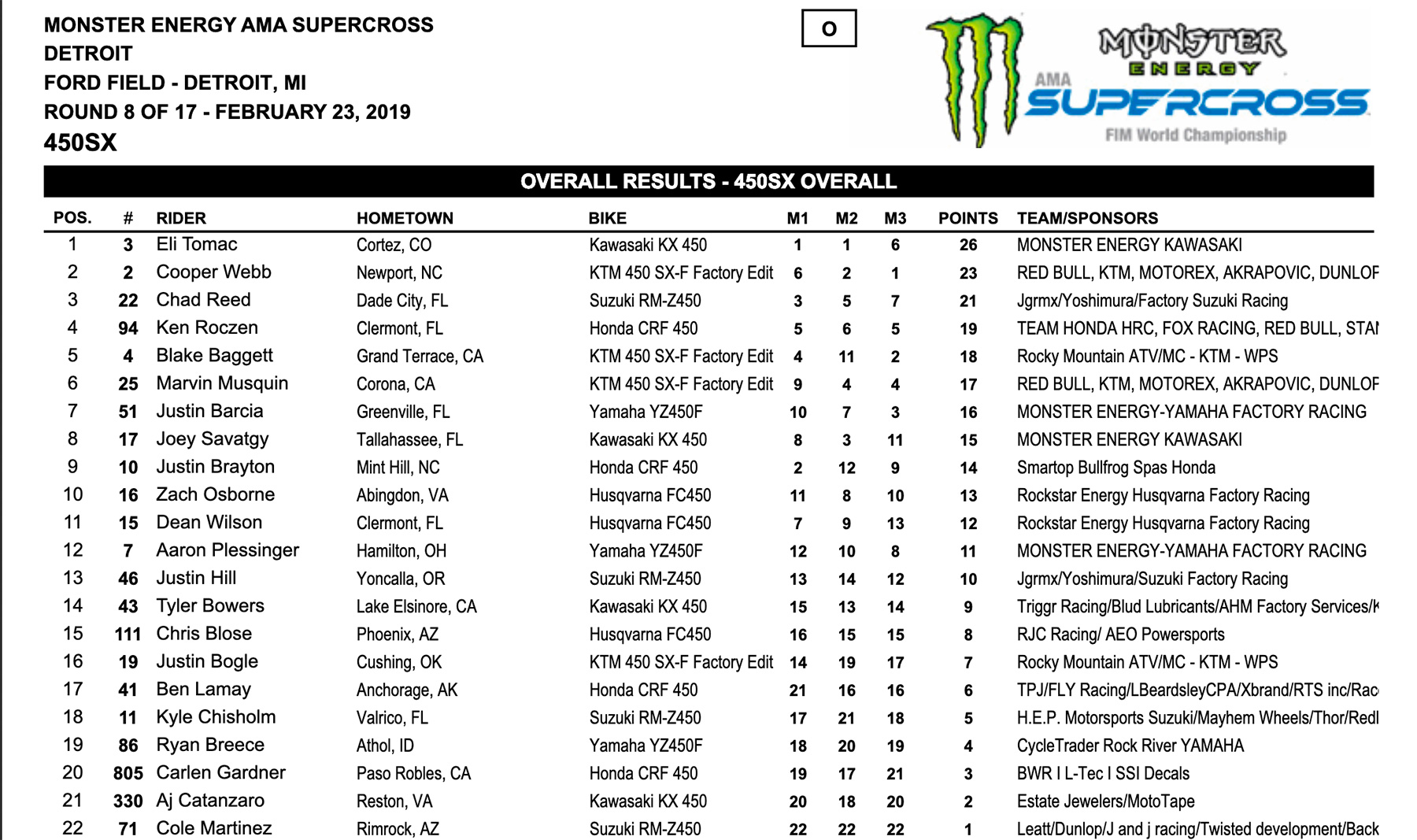 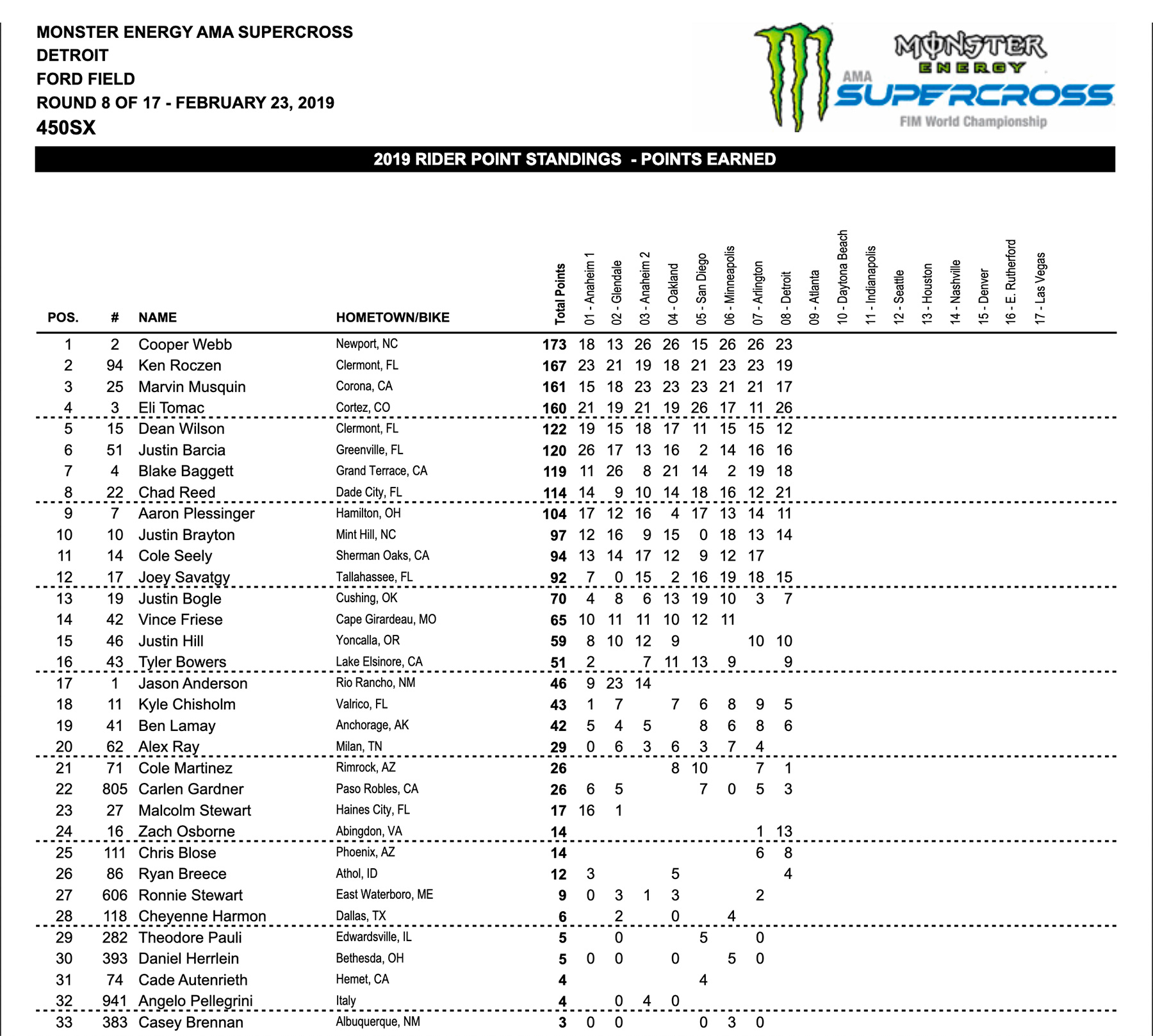 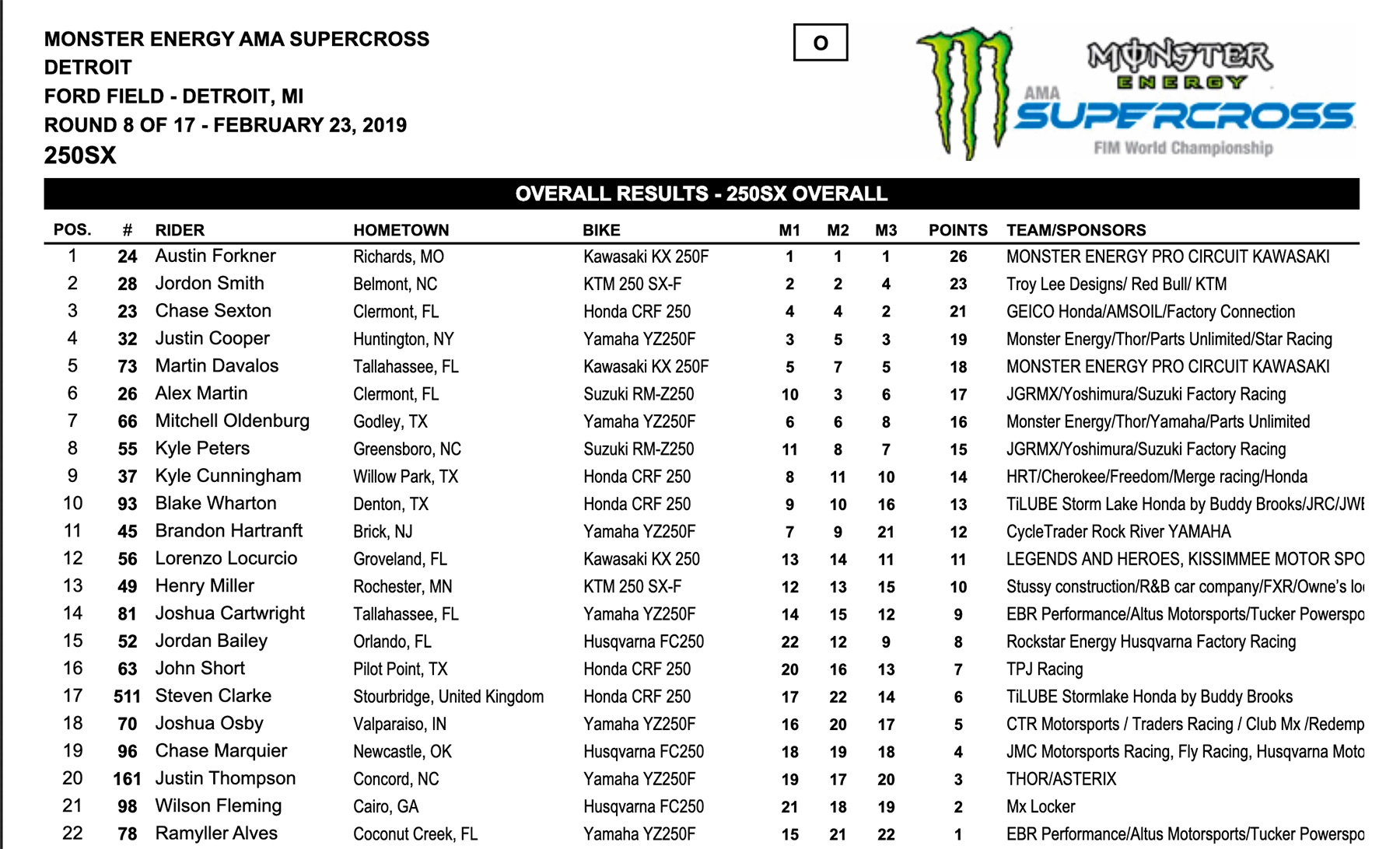 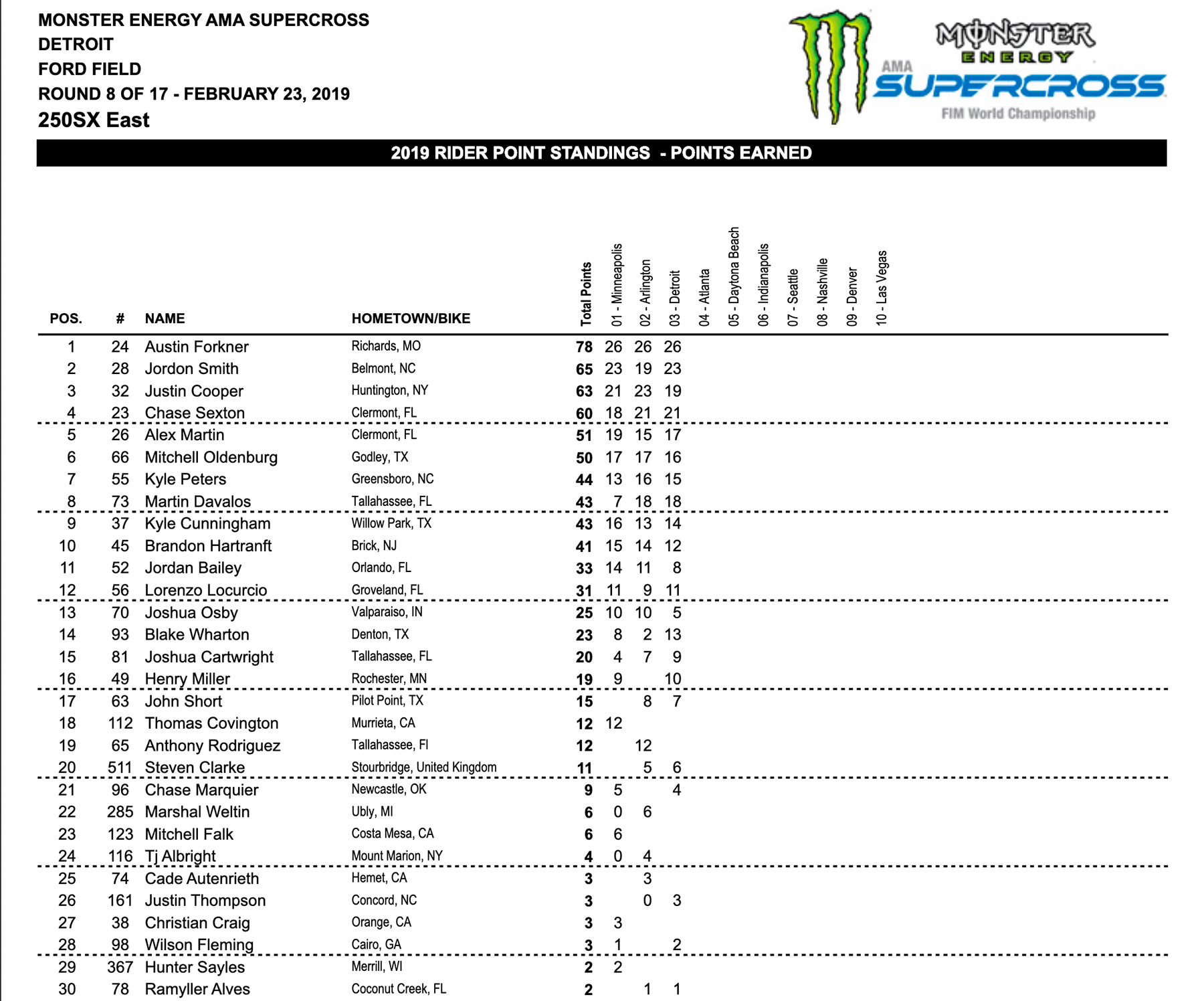