Tomac and Ferrandis Race Through For Thrilling Wins at Oakland 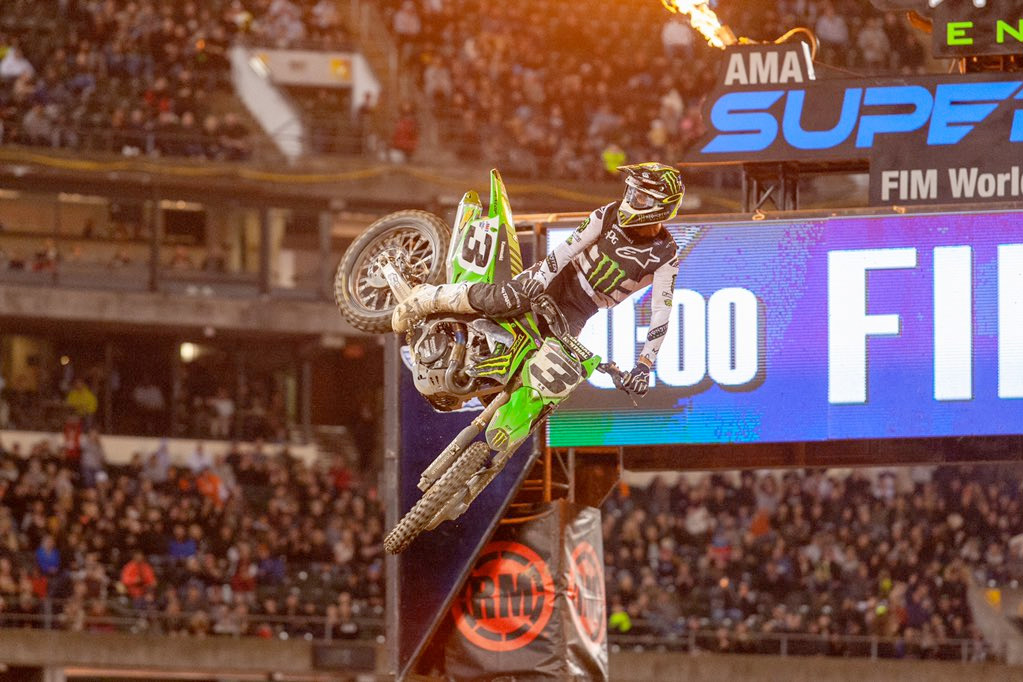 Eli Tomac closed to with in two points of Ken Roczen with his win in Oakland tonight
Eli Tomac and Dylan Ferrandis both scored their second main event wins of 2020 season in their respective classes as the Monster Energy Supercross Championship headed to Oakland for the fifth round of the year.

It was championship points leader Ken Roczen aboard his Factory Honda CRF450R who rocketed to the opening 450 holeshot of the evening ahead of Monster Energy Kawasaki's Eli Tomac with Rocky Mountain KTM's Blake Baggett in third.

With all three riders riding in formation, Tomac made a move for the lead late in the race; however, the move caused him to stall, allowing Baggett through to second position momentarily. Baggett then took his shot at Roczen for the lead, lining up a pass that allowed Tomac to sneak back under Baggett instead and at the same time enabling Roczen to pull a small gap that he held to the end of the race, claiming the win ahead of Tomac and Baggett.

Australia's Joel Wightman finished the heat in 15th and headed to the LCQ along with Rockstar Husqvarna's Dean Wilson who stalled early in the race and was only able to work his way back to 10th spot. 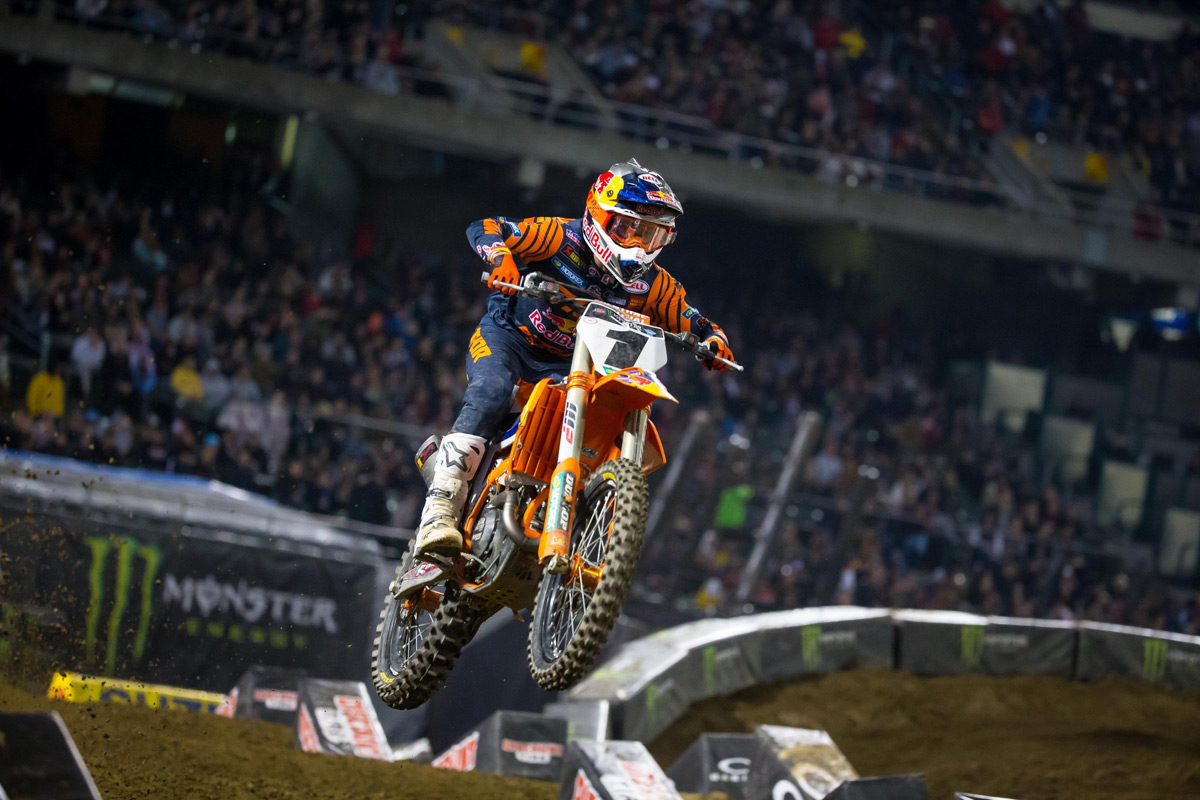 Cooper Webb put in a last lap last turn effort to finish in second spot and keep his championship alive
In the second 450 heat, it was Justin Hill who lead the field through the first turn on his Smart Top Honda and lead the opening lap from Monster Energy Yamaha's Aaron Plessinger and Red Bull KTM's Cooper Webb.

The first lap did not work out so well for both Rockstar Husqvarna's Jason Anderson and Monster Energy Kawasaki's Adam Ciaciarulo with both riders suffering crashes, leaving them buried at the back of the field.

Back up front Webb passed Plessinger just before the halfway mark but trailed Hill by just under 4 seconds. Round one winner, Justin Barcia aboard his Monster Energy Yamaha. also worked his way forward moving from 5th to 3rd passing both Factory Honda's Justin Brayton and Plessinger, with Brayton also making his way past Plessinger

Cianciarulo moved his way back into a qualifying position with just over two minutes to go, with Anderson doing likewise shortly after.

HIll held on to win by two seconds ahead of a fast-finishing Webb, with Brayton crossing the line in third after Barcia's bike expired on the final lap, forcing him to the LCQ

It was privateer Joan Cross who captured the holeshot in the 450 LCQ, with both Barcia and Wilson rounding the first turn outside the top five.

Barcia made quick work of the riders in front of him, quickly moving to the lead and going on to take a comfortable win ahead of Wilson who took a little more time to work his way into a qualifying position.

Cade Autenrieth moved his way into third and a safe qualifying position, while behind him, Jason Clearmont had his hands full with Alex Ray as the two riders started the final lap.

Despite his best efforts, Clearmont could not hold off the hard-charging Ray who came all the way back from 10th position early in the race to seal the final spot in the nights' main event.

Australia's Joel Wightman finished down in 9th position, and while it was his best performance to date, it put an end to his night in Oakland.

When the gates dropped for the nights 450 main event, it was once again Roczen who lead the field through the first turn with Cianciarulo and Tomac on his rear wheel.

Tomac quickly made the pass on his team-mate for second position, but Cianciarulo promptly responded, making a move Straight back while behind them Webb moved into 4th.

Webb put some pressure on Toamc for third, but a small mistake took the pressure back of Tomac.

With 12 minutes left to run, Tomac forced the issue with Cianciarulo, putting in a little bump and run move to take over second position.

Anderson, who started just inside the top ten, worked his way into 5th position by the halfway mark of the race. Still, the real action was about to head up out front, and with nine minutes left to run, Tomac made his move for the lead making a clean pass on Roczen as the two riders approached lappers for the first time.

Barcia was another rider on the move, coming from the LCQ, his start in the main left him well outside the top ten, but worked hard to move into 6th as the race wound down.

Back up front, Tomac made a mistake in the sand section, losing control and running off the track, allowing Roczen to re-take the lead.

The lead was short-lived by Roczen, with Tomac re-passing Roczen after the triple for the second time in the race, while at the same time, Webb moved by Cianciarulo for third and set after Roczen in second.

At the line Tomac took the win, with Webb putting a last turn pass on Roczen for second position, with the two riders making contact, leaving Roczen to limp off his bike with what looked to be a leg injury in third.

Dean Wilson held worked his way through the field to finish 7th ahead of HIll in 8th, Baggett in 9th with Malcolm Stewart rounding out the top ten.

In the championship standings, Roczen continues to hold down the points lead by a narrow three points from Tomac, with Barcia 12 points further back in 3rd. Anderson holds down 4th just two points behind Barcia, with Webb one point further back in 5th after tonight's second-place finish. 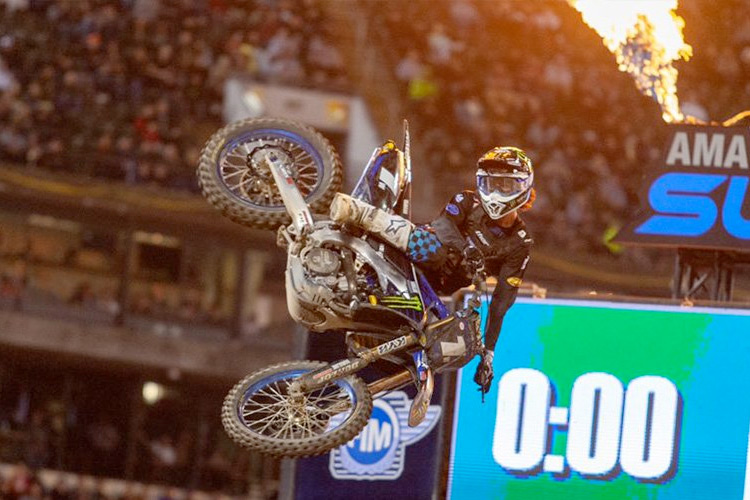 Dylan Ferrandis is the new 250 West points leader after his win tonight.
In the opening 250 heat race, it was Michael Mosiman on his Rockstar Husqvarna who lead Jacob Hayes through the first turn with Monster Energy Pro Circuit's Austin Forkner and Troy Lee Designs KTM of Brandon Hartranft quickly moving by Hayes to fill out the top three positions.

Forkner worked hard to catch Mosiman as the race wound down with the two riders getting into a game of cat and mouse as they battled for the lead, brake checking and running each other high. In the end, it was Forkner who came out on top taking the win just ahead of Mosiman, with Hartranft in third.

It was a good race for Yamaha mounted Australian Aaron Tanti who transferred directly to the main event with a 7th place finish.

The second 250 heat had a big Australian presence as the Penrite Honda Racing team duo of Mitchel Oldenburg and Aussie Luke Clout lead the field through the opening lap with Clout going on to lead a handful of laps early after moving around Oldenburg.

Oldenburg then moved back to the lead, as Pro Circuit's Cameron Mcadoo made his push to the front of the field, passing both Honda riders on his way to his maiden heat win.

Behind them, Star Racing Yamaha's Dylan Ferrandis worked his way into second position. At the same time, Oldenburg held down third, Clout came under pressure from points leader Justin Cooper with the Star Yamaha rider momentarily passing Clout, before Clout pushed him wide, leaving Cooper off the track and out of a qualifying position and heading to the LCQ.

Justin Cooper made light work of the LCQ, taking the holeshot and efficiently running away for the win ahead of Killian Auberson, with Lorenzo Camporese and Logan Karnow filling the final two spots in the main event.

JGR Suzuki's Alex Martin claimed the holeshot when the gates dropped for the nights' main event, with Forkner quickly moved into second, with Ferrandis in third and the Australian Penrite Oil Honda race team duo of Oldenburg and Clout in 4th and 5th respectively

As the riders started the third lap, Forkner made his move past Martin for the lead, with Ferrandis quickly doing likewise moving his way into second, meanwhile points leader Justin Cooper who started on the outside was moving forward and was in 5th place.

Mosiman who was also trying to work his way forward crashed heavily with several other riders piling up into him including Australia's Aaron Tanti and Jay Wilson.

Mosiman was able to walk off the track under his own power, but the crash put an end to his night, meanwhile back on track Cooper made a move into 4th passing Clout.

With just under five minutes to run, Ferrandis put a strong move on Forkner for the lead, forcing the Kawasaki racer off the track and taking the lead.

With one minute remaining in the race, Hartranft moved his way into the top five, pushing Clout back to 6th.

Further up the track as the last lap was about to begin, Cooper made his way by Martin for third position.

When the chequered flag flew, it was Ferrandis who claimed the win for the second time this year, ahead of Forkner and Cooper.

Martin held on for 4th ahead Clout who moved back into a top-five finish at the line, with team-mate Oldenburg one spot further back in 6th.

Derek Drake also finished ahead of Hartranft with the KTM duo finishing in 7th and 8th while Tanti put in another great ride to finish inside the top ten in 9th position.

Jay Wilson rounded out the Australian contingent in 16th position, working his way forward after getting caught up with Mosiman's crash earlier in the race.

The win elevated Ferrandis to the championship lead by two points ahead of his team-mate Cooper with Forkner a further eight points further back in third.