Round five saw riders battle through the night in brutal conditions as the Californian skies drenched Petco Park before practice. While the rain stayed away for the night program, the damage had already been done, and the entire circuit was saturated with many parts still covered in water as racing got underway.

The opening heat of the 450SX class saw HRC Honda's Ken Roczen take a confidence-building win after only qualifying in the twelfth place earlier in the day. Championship leader Cooper Webb rode the entire heat in second with holeshot winner Joey Savatgy taking third. Monster Energy Yamaha Racing's Justin Barcia was a big mover coming from outside the top ten to finish fourth. Australian Supercross Champion Justin Brayton didn't make it straight into the main after crashing and was sent to the LCQ.

Heat two saw the most amount of on track action with plenty of passing in the increasingly difficult conditions. Rocky Mountain ATV/MC - KTM - WPS' Justine Bogle lead the first half of the race while Red Bull KTM's Marvin Musquin went sideways off the start and JGRMX Factory Suzuki Racing's Chad Reed crashed giving both a lot of work to do. Monster Energy Yamaha Racing's Aaron Plessinger assumed the lead after Bogle crashed and then was involved in a race to the flag with Monster Energy Kawasaki's Eli Tomac, Tomac making the pass with a lap to go to greet the chequered flag first. Red Bull KTM's Marvin Musquin made an impressive charge through the field to third with Kyle Chisholm and Bogle rounding out the top five. Chad Reed clawed his way back to seventh to go directly to the main.

Smartop Bullfrog Spas Honda's Justin Brayton, who was ninth in the standings didn't show for the start of the LCQ after injuring his thumb in the heat race! Ben Lamay went on to take the LCQ win.

With conditions so challenging officials decided to shorten both classes with the 250SX West riders having their main shortened to 10 minutes from 15 while the 450SX class reduced to 15 minutes.

Ken Roczen came out blazing in the 450SX main taking an emphatic holeshot over Tomac and Bogle. The German's advantage soon vanished in the second corner when he dropped his CRF450. This allowed fastest qualifier Tomac to assume the lead with Bogle and Justin Barcia on his heels.

With conditions getting harsher and harsher all riders were struggling as Tomac played the consistent game out front. Barcia was the first to go with his bike stopping. Bogle was still impressive in second while Roczen had fought his way back to third. A trio of KTM's, Baggett, Musquin and Webb all ran fourth, fifth and sixth. Chad Reed, who had a top five start held down seventh ahead of Plessinger. It then got worse for Webb after the Championship leader endoed after trying to avoid his team-mate! A quick pitstop saw him drop to ninth.

With five minutes to go it, all became more a battle of survival rather than speed with the top ten already having lapped up to tenth place. Bikes where strewn around the circuit with either breakdown's or simply bogged!

When the fifteen minutes were up, it was Tomac who took his first win of the season in dramatic fashion, first getting caught on a tough block which cut into his 25 second lead over Roczen and then getting caught up in a crash on the last lap that cut into his lead even more. In the end, though he got there in what had to be the slowest win in history. Musquin made a last lap pass on Roczen to claim second. Justin Bogle, who was so close to his first podium had to settle for fourth after stalling while running second while Reed rounded out the top five for his best result of the season so far.

Tomac's win sees him take the points lead going into round six. 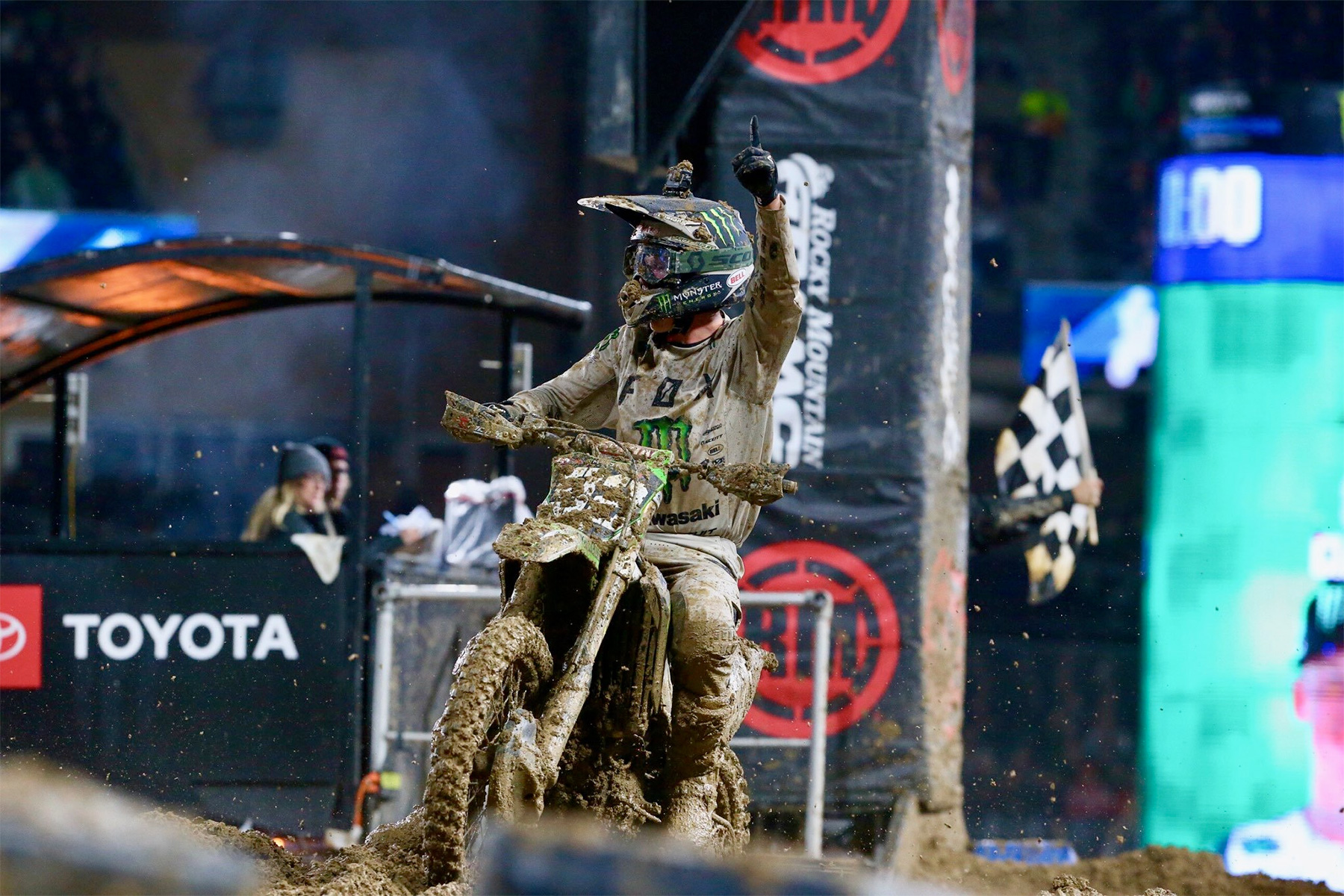 Heat two saw GEICO Honda's RJ Hampshire lead from start to finish with championship leader Colt Nichols in close company. JGRMX Suzuki Factory Racing's James Decotis, Canadian Jess Pettis and JMC Motorsports Racing's Carson Brown rounded out the top five. Fastest qualifier Shane Mcelrath had a terrible start and with the conditions being so atrocious had his work cut out for him. Unfortunately, he never made it into the top nine after crashing and was sent to the LCQ.

Championship challenger Mcelrath had it all to do in the LCQ and although it was Pro Circuit Monster Energy's Garrett Marchbanks that took the win the Troy Lee Designs Red Bull KTM rider was second thus making it to the night's main event.

Australian privateer Thomas Ravenhorst was a non-starter for the night after an electrical gremlin that couldn't be fixed in time for racing put an end to his night before it started.

When the gate dropped on the 250SX Main, it was Adam Cianciarulo with the holeshot with Jess Pettis and Colt Nichols in second and third. From there mayhem broke out with carnage all around the opening laps. Heat winner RJ Hampshire, Nichols and Mcelrath were all in the wars. It took a good couple of laps for things to settle down by which time half the race had gone by.

By half distance, Cianciarulo had established a solid eleven-second lead while the washout from the carnage of the opening laps saw Ferrandis in second, and LCQ winner Marchbanks in third. Championship leader Colt Nichols, who had run as high as second, was way back in eleventh after spinning out and taking a while to get started. The other Championship contender Mcelrath was another to taste a lot of mud and was back in seventh.

In the end, it was Cianciarulo who took his third win of the season, a paddle tyre proving a wise choice, after going the whole ten minutes unchallenged, the win also sees the Monster Energy Kawasaki rider take the championship lead heading into the 250SX West three week break. Marchbanks rode to second unchallenged after Ferrandis had a small crash a few laps from the finish. James Decotis came through to take the final podium spot ahead of Shane Mcelrath and Jess Pettis. After running in the top three for eight of the nine laps, Frenchman Dylan Ferrandis was classed as seventh after his bike quit on the last lap. Championship leader going into the night, Colt Nichols crossed the line a lap down in tenth.

Round six of the championship now moves to U.S Bank Stadium in Minneapolis next weekend.