Tom Sykes to continue with Kawasaki for two more years 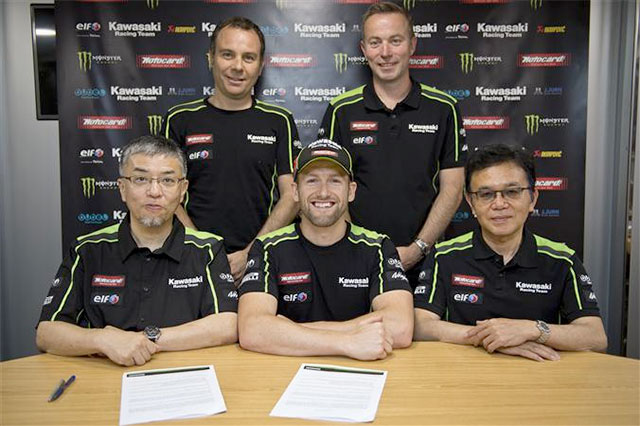 2013 FIM Superbike World Champion for Kawasaki, Tom Sykes, will continue his successful relationship with KRT and KHI for another two years after making a new agreement with the Japanese factory to be a key member of the overall Ninja ZX-10R racing project, both on and off-track.

Having formed such a successful partnership with Kawasaki in the past few years, culminating in his championship win in 2013, Sykes will continue to be an integral part of the Kawasaki racing and development programme around the Ninja ZX-10R.

Sykes has now taken 30 race wins, and all but one of his 76 career podium finishes, on ZX-10R machines. Tom has also set the second highest ever record of Superpole qualifying wins, which reached 36 at the most recent round in Misano. He has also set 30 fastest laps during WorldSBK races and has been twice a runner-up in the championship, in addition to his headlining success in 2013.

Once more Tom will join up alongside his current KRT team-mate Jonathan Rea, who also recently re-signed.

"I am really excited to have made a further commitment with KRT and KHI. It‰Ûªs a great feeling to be back with such a great team for another two years," Sykes said.

"We have already shown the capabilities of the latest model Ninja ZX-10R this season and there is a lot of potential still to come from the bike. I think it is safe to say that we have the best all-round package in the FIM Superbike World Championship and I would like to thank KHI for showing their continued commitment to me as a rider.

"As well as the bike and the on-track performance I have been part of the Kawasaki family for seven years so it was really natural to continue that relationship. To carry on working with my dedicated crew - Marcel, Danilo, Mattia, Raul, Tambu and Ruben and all my other valued colleagues and friends in the team - was priceless as they are widely recognised as the pick of the crop in the WorldSBK paddock.

"I get so much support from the brilliant fans and passionate Kawasaki owners that it was also a positive decision to make to remain part of that. Another important thing is to continue the development programme, for the road bike and the race bike side of things, which is something I feel an integral part of. The technical aspect of working with the team and KHI is deeply satisfying to me, not just the successes on track.‰Û