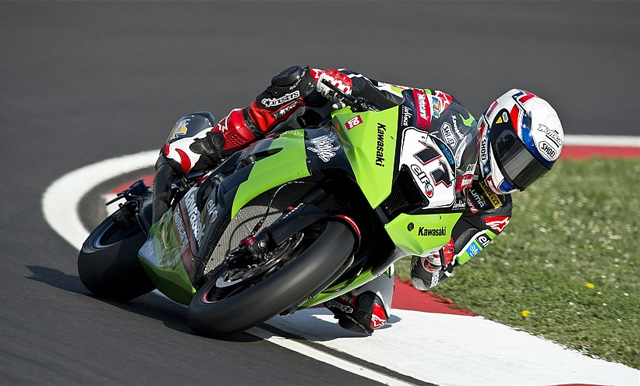 For the second race in succession Tom Sykes gave the Kawasaki Racing Team pole position at round two of the World Superbike Series being held at Imola.

Sykes was peerless in the final Superpole session, as he had been in combined qualifying. In Superpole three he set a new track best for the SBK category of 1'46.748 seconds. Tom took his Ninja ZX-10R 0.473 seconds clear of the second place rider, Sylvain Guintoli; with Sykes Praising his Ninja's ability to give him information on just how hard he was pushing to enable him to make such a fast lap time.

"To get two Tissot-Superpole wins on the roll is fantastic." said Stykes. "I dug deep after the second Superpole because I knew the times would be fast."

On my fastest lap in Superpole three I had a lot of feedback from my Kawasaki. A couple of times I arrived past the limit, but the feel was good so I could finish with a good lap time. A few of us have very consistent race pace so there will be a big fight over full race distances on Sunday." he continued.

"I had a little bit of a problem with the Qualifying tyre in that second Superpole session but in Superpole three we made a small change, dug a bit deeper and managed to do a good lap. We have a good starting position for tomorrow and I think it will be exciting during the races." the British rider concluded.

Meanwhile in the Supersport Class, Bogdanka PTR Honda rider Sam Lowes claimed the pole position nearly a full half a second faster than his nearest rival at the session which was cut short.

"We worked towards the race, made some changes to the bike and it felt really good." said Lowes. The qualifying session was going really well and I knew I could do a faster time but the red flag caught us out a little bit."

"I thought we left it a bit late but luckily I got one flying lap in and managed to grab the pole position. The bike is working good and it's exactly how I want it. We're capable of a good performance tomorrow so I'll do the best I can. ‰ÛÏhe concluded.

Main Photo: Sykes on his way to his second straight pole position