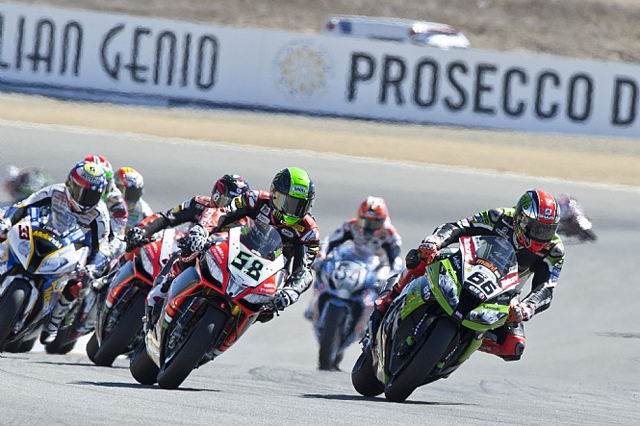 Tom Sykes added a fourth place on Sunday to his race one victory to take a 23-point advantage away from the 12th round of the 2013 World Superbike Championship held in the United States.

Sykes was leader of the second race at Laguna for 21 of 26 laps but in the final two circuits he got passed by three riders and had to settle for fourth place. He had been fighting unexpected traction issues exiting corners for most of the race and rode well to stay in the lead for so long, but he was unable to make the most of his machine's performance as he could not get the power to the ground as he wanted.

‰ÛÏIt was great to win on Saturday and I led for a long time today but that was the first time we have struggled with grip all weekend." Sykes stated. "We were six or seven tenths off our best times in the same track conditions and we have to think about why that was.

"We know what our potential was here again today," he added.

"Overall, we have extended our championship lead but it would have been nice to taken that second podium! We can keep improving and we have a couple of good circuits coming up so we will move on with confidence."

His first race win on Saturday added to his 13 points for fourth on Sunday take Sykes to a leading total of 361 points, with two rounds and four races remaining, the first next weekend in France at Magny-Cours.

"In less than a week‰Ûªs time we will be in France and doing it all over again. We have worked hard and well all race weekend and took a win on Saturday.‰Û