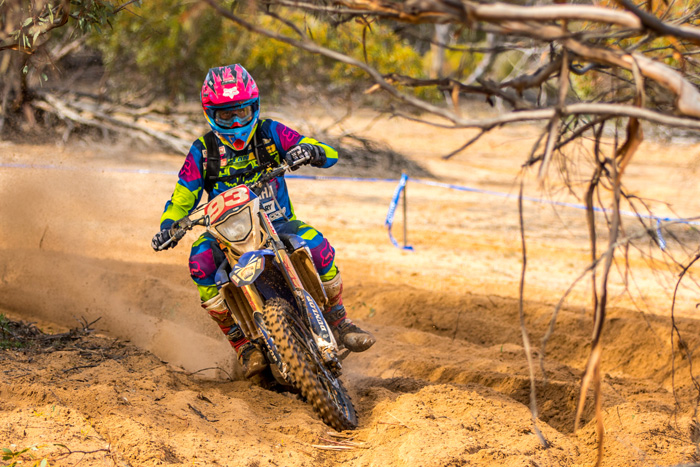 CDR Yamaha's Tom McCormack is recovering in an Adelaide hospital after crashing heavily at round six of the 2015 Australian Off-Road Championships held in Wanbi yesterday Sunday the 24th of May.

McCormack who was competing in his first event on his return from a wrist injury sustained during the Australian Enduro-X championship earlier this year was back up to full speed on the Saturday for round five, coming back from an early race incident working his way through the field in the 2.5 hour cross country race to finish second in the E1 class aboard his WR250F.

On Sunday McCormack unfortunately suffered a high speed crash in one of the early sprints on the deep sand circuit and after being stabalised by the medical crew at the event, was airlifted back to Adelaide.

While is was apparent that the crash left McCormack with some server injuries, there was minimal information available on his situation or health immediately after the incident.

McCormack has just revealed the extent of the injuries suffered via a facebook post with the Queenslander suffering multiple back injuries along with a punctured lung.

"Some might already know but I had a crash yesterday and I'm doing okay." McCormack posted. "Late last night I had surgery on my spine fusing two vertebrae. 5 broken vertebrae, lacerated spleen Collapsed right lung."

It has been a tough week for riders at national events in South Australia, with fellow Queenslander Joel Evans also at the Royal Adelaide hospital as he continues his long road to recovery after suffering server back and spinal injuries at the MX Nationals held at Murray Bridge last weekend.

We here at fullnoise.com.au wish both riders our best wishes as the recover from their injuries.

Top Image: CDR Yamaha's Tom McCormack was in fine form on Saturday before a big crash on Sunday left him with some big injuries.