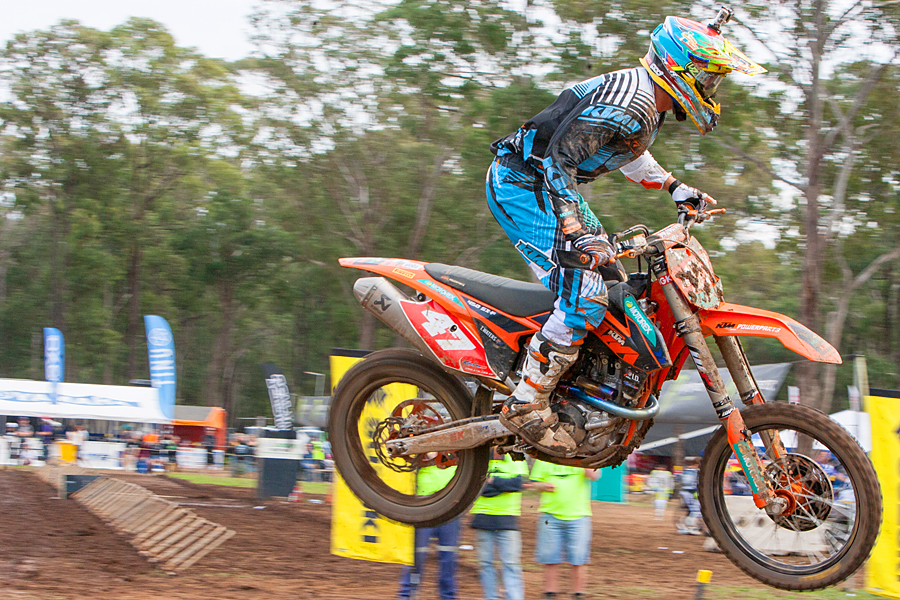 For the third Monster Energy MX Nationals round in a row the runaway winner of the first three rounds, Todd Waters carried in a significant injury and managed risk, pain, and diminished capacity to still emerge as championship leader.

Just a fortnight after breaking his collarbone at the Queensland championships, Waters was passed ‰Û÷fit to compete‰Ûª in a medical assessment and after posting seventh-fastest time in Go-Pro SuperPole, finished with 7th and 11th placings from the two motos to round out the day 10th overall.

The 44 points earned by Waters on the day left the 2012 MX1 championship runner up with a slender four point lead heading in to the final four rounds of the season.

‰ÛÏWe purely rode in defence mode today." Waters stated after racing concluded at Appin. "The medical guys went to great care to tell me exactly what was at risk today if I crashed on it, so we kept it together and got through able to walk away from it, so now I‰Ûªm looking forward to Hervey Bay in a fortnight‰Ûªs time.

Waters will look to rest up for a week, before returning to the bike ready for round seven of the championship and once again thanked his team and in particular, team manager Rob Twyerould for the continued support.

"I‰Ûªll have a week off then get back into the riding and hopefully go out on the track and start feeling like myself again." Waters continued. "I want to say a massive thanks to Rob, we‰Ûªve had some misfortune come our way but he‰Ûªs always been so supportive which has made my job easier to focus on the things that matter.

"I really like working with him and my mechanic Ryan, they back me 100 percent and I hope to get back up there and reward them for it. There was a bit of pain today but you‰Ûªve gotta deal with that sometimes, it was more the muscle fatigue that was bothering me!" Waters concluded.

Things will not be easy for Waters at when the series contines at Hervey Bay on the 28th of July, a track known for its rough, sandy, rut forming surface that takes its toll on both rider and machine.

Top Image: Todd Waters put his injuries behind him to race to a dertermined 10th place overall in Appin and retained the points lead
Credit: Aaryn Minerds