Todd Waters in a happy place heading to Conondale 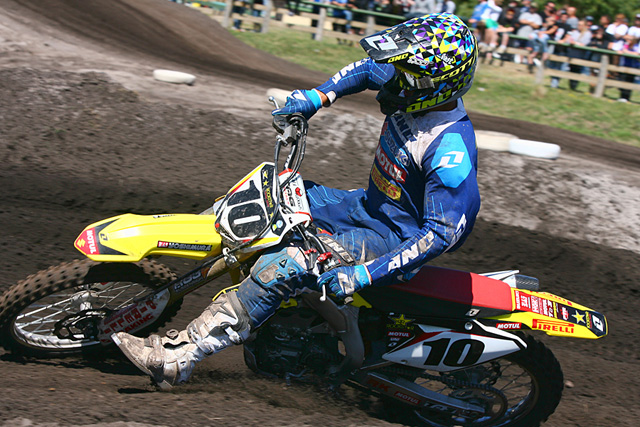 Like many of the top motocross riders around the country at the moment Todd Waters is busy preparing for the 2012 Monster Energy MX Nationals.

"I am getting ready for the nationals at the moment spending a lot of time training, and travelling, I have been doing a heap of travelling lately." said Waters

"We have been doing a lot of testing out at Coonabarabran and Appin, I have been spending a heap of time testing with Jay Foreman which has been good, he has been opened minded about everything which helps to make testing easy. He continued.

Queensland Born Waters had spent the past three years aboard Honda machinery before making the switch to the Motul Pirelli Suzuki team for 2012, like all riders who change teams, Waters is spending that little bit of extra time needed adapting to his new ride.

"The team has made the switch easy on me, obviously it is a new team for me, so it will take a little time to get the bike where I want it, I spent three years on the Honda, so each year was pretty simple, we could go off our base setting from the year before. This year we had to start from scratch, so we had a lot of work to do."

"The bike itself is really nice, and the team already had them well set up which made things a lot easier, testing with the team really has been going great, we have spent a lot of time setting up the bike and are in a happy place now." added the 21 year old 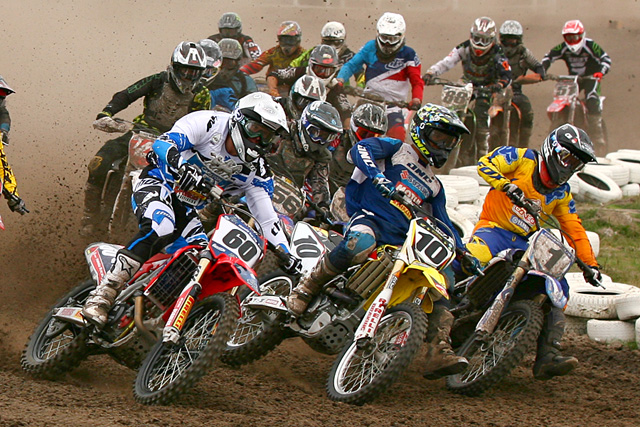 Waters battling for the lead in the first turn at last weekends Vic titles - Photo Credit: KAJX
After a couple of frustrating years with Injuries, the rider who currently resides on the Gold Coast is feeling good coming into the season, though a crash while racing in New Zealand earlier this year has set him back a tad.

"I am coming into the all fit and healthy, I had a pretty decent crash over in New Zealand, where I hurt my back a little bit, which set me back a couple of weeks, but we will build throughout the series and hopefully be there at the end." Waters stated.

Coming off a strong performance in Victoria where he battled with one of the favourites for the national title coming into the season in Brad Anderson, Waters is confident that if he can get his starts right and keep it on two wheels he will be well placed come the end of the season.

"I had a good hit out on the weekend in Victoria, I felt like I had some good speed. I was catching up to Brad Anderson during the races and tried to make some passes but could not make it happen; I had faster lap times than him which I was happy with." He explained.

"Brad was a tough guy to race and raced hard, it was good to get some time racing against him and I'm looking forward to some more."

The Cairns raise rider is looking forward to getting the year underway in just over a week and a halves time.

"There should be some great racing this year, it is a packed field we are going to have to be on our A game off the start, and keep the thing upright." concluded the 22 year old

Main Photo: Todd Waters running the number 10 preseason in Vic, he will revert to his usual #47 for the nationals.
Photo Credit: KAJX