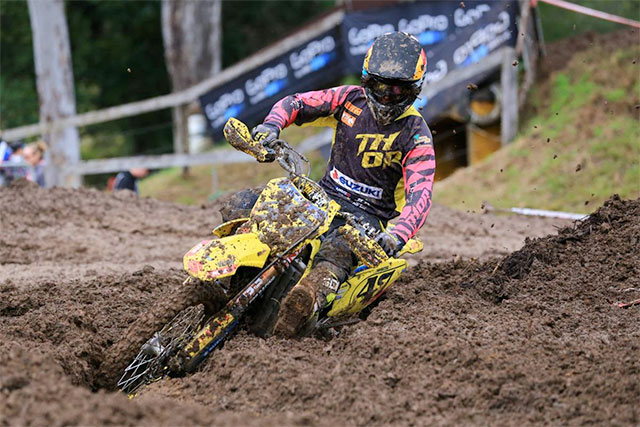 Wilson Coolair Motul Factory Suzuki have left Conondale with plenty of reason to celebrate, after Todd Waters collected another podiu in the Thor MX1 class, at Round 7 of the Motul MX Nationals in Queensland.

From the minute the Suzuki RM-Z450 machines hit the wet and muddy Green Park circuit this morning, Waters and Wilson showed impressive speed, with Waters making it through to GoPro Superpole where he finished in second place with a 2:00.134 lap time, while Wilson qualified in 13th place.

When racing got underway Waters was simply on fire ‰ÛÒ utilising every inch of his European experience to attack the challenging Conondale track, riding on a level above the rest - and it was for that reason that Waters led from lap one all they way to the chequered flag, collecting his first race win for the day. Teammate Wilson also raced to an impressive result in moto one, the Suzuki rider taking well to the rough and rutty track conditions, and finishing in an outstanding 10th position in the talent packed Thor MX1 class.

In race two, Waters once again got to a solid start, however a crash on lap one forced him to re-join the race in 14th position and with a job on his hands to make up time. But Waters showcased strength and determination in moto two, picking off numerous positions to cross the line in third place after 30 minutes. Despite the deteriorating track conditions, Wilson also once again remained consistent in moto two, and stepped things up to conclude the final race of the day in 9th place.

With Waters‰Ûª 1,3 results, Wilson Coolair Motul Factory Suzuki wrapped up Round 7 with second position on the MX1 podium, while Wilson finished inside the top ten with 9th overall for the weekend.

‰ÛÏI felt good today, I like Conondale a lot and I ride the mud well too. I was stoked with the win in the first race, but in race two I went down which probably cost me the overall today,‰Û