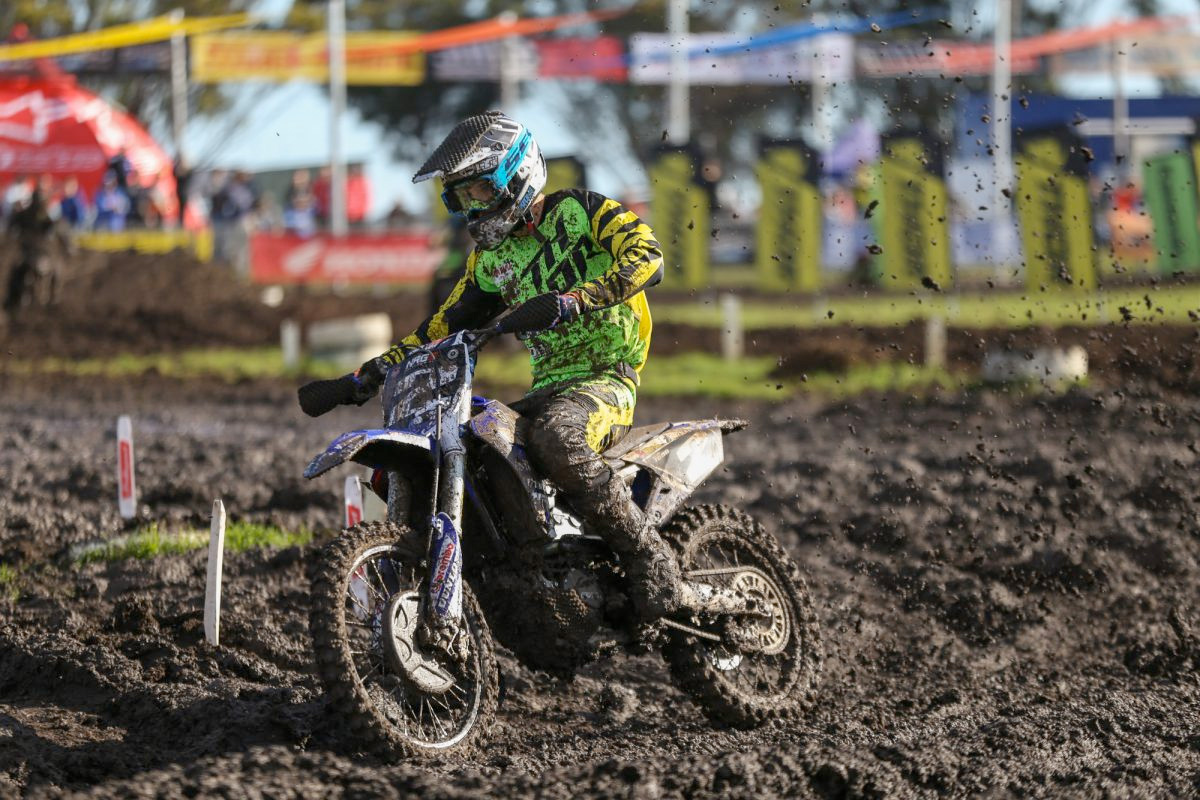 Horsham Motocross Track roared to life today, with DPH Motorsport‰Ûªs Wilson Todd securing the Motul MX2 overall victory and the category‰Ûªs red plate at Round 4 of the 2017 Motul MX Nationals in Western Victoria.

It was an unusual day of racing for the fourth instalment of the championship, with riders taking to the track in pristine weather conditions today, however below their wheels, the surface was a completely different story.

After heavy rain had fallen in the lead up to round four, riders were forced to contend with an extremely muddy track for their qualifying session, but it was DPH Motorsport‰Ûªs Todd who set the pace this morning with a 2:10.582 lap time, more than four seconds quicker than second fastest qualifier Hamish Harwood (2:14.266) while KSF Racing‰Ûªs Dylan Wills was third fastest on track thanks to a 2:14.759 lap time.

Unfortunately for KTM two-stroke rider Egan Mastin of Davey Motorsports, despite initially setting the fastest time in qualifying (2:10.086) he was penalised three positions due to jumping under a yellow flag.

When riders lined up for their first moto of the day, the sun was out but the track remained wet and muddy, and as a result riders opted to forgo their sighting lap and head straight into a race start. When the gate dropped it was Todd who got the jump and secured the first Raceline holeshot, but with a slippery and wet surface to contend with, WBR Yamaha‰Ûªs Aaron Tanti was able to find grip and challenge the DPH Motorsport‰Ûªs rider. However, Tanti went down only a few turns later handing the lead back to Todd, where he then had a clear track ahead of him.

With 30 minutes on the clock in moto one for the Motul MX2 class, riders played it smart in the opening laps, ensuring that they preserved their machines for the duration of the race.

Despite not getting the best of starts, red plate holder Mitchell Evans began to make his way to the front by the third lap, and with riders going down left right and centre in the mud, it was a mission to simply keep their machines upright.

But Todd was having no issue with the conditions out in front, the Yamaha rider stretching out his lead to an incredible half a lap by the time riders had reached the half way mark. Behind him, Richardson continued to maintain second position despite going down numerous times, followed by Webster, Harwood and red plate holder Evans in fifth.

With the track proving to be brutal in moto one, it was simply survival of the fittest, and unfortunately for Richardson a small mistake proved costly, dropping from second back to sixth in a matter of seconds.

With less that five minutes left on the clock in the opening moto Todd continued to lead from Harwood who was the only rider that the DPH Motorsport‰Ûªs leader hadn‰Ûªt lapped. Webster slipped back to third thanks to a pass from Kiwi Harwood, followed by Mitchell Evans and Richie Evans in fourth and fifth places respectively.

But it was Todd‰Ûªs patience and technique that paid off in moto one, surviving the toughest conditions of the season to take the first race win at Horsham. Second in race one and the only rider not lapped by Todd was Harwood, followed by Webster in third. Red plate holder Evans wrapped up the opening moto in fourth, followed by Ricky Latimer in fifth. KSF Racing‰Ûªs Wills, Tomas Ravenhorst, WBR Bulk Nutrients Yamaha‰Ûªs Tanti, Lachlan Wilson and James Brown all completed the top ten.

Incredibly 16 riders registered a DNF in the first Motul MX2 class race, indicative of the conditions that competitors were forced to contend with.

After the challenge of moto one, in race two it was a dash for points for the Motul MX2 competitors. And when gates dropped for the second time today it was Todd once again who shot off the start and secured the holeshot.

With the start playing a huge role in the outcome of today‰Ûªs racing, Harwood and privateer Latimer wasted no time slotting in behind their race leader, while Richardson was just outside the top three in fourth, desperately racing for points after a disappointing race one finish.

After three laps on track, one rider who was visibly absent from the top ten was red plate holder Mitchell Evans ‰ÛÒ Evans who had entered the round having been undefeated since round two was back in 14th position and with a large task ahead of him if he was to chase down the leaders.

With only 20 minutes to race in the second moto for the Motul MX2 class, both Harwood and Latimer were charging hard in a bid to keep race leader Todd in their sights, while behind them, Richardson, Webster and Mastin were locked into their own battle for top five positions.

By the halfway point in race two, Todd looked unstoppable in P1, followed by Harwood, Latimer, and Serco Yamaha‰Ûªs Richardson.

As the Motul MX2 class reached its later stages in race two, riders had settled in to their positions, but one thing was certain and that was that no one was getting near the DPH rider Wilson Todd.

When the chequered flag flew on the second moto it was Todd who crossed the line victorious by more than 22 seconds, while Ironman Harwood recorded his best result so far this season finishing in second, followed by privateer Latimer who also finished in a career best third in moto two. CRF Honda Racing‰Ûªs Webster and Serco Yamaha‰Ûªs Richardson wrapped up the second race in fourth and fifth places respectively. Mastin, Wills, Raceline Pirelli KTM‰Ûªs Rykers, Mitchell Evans, and Richie Evans all finished inside the top ten in moto two.

With 1,1 race results Todd was rewarded with the round four win as well as the red plate at Horsham this afternoon , second on the podium was Kiwi Harwood, while consistency paid off for Webster who‰Ûªs 3,4 results handed him with third overall at Horsham.

‰ÛÏIt‰Ûªs awesome to get the championship lead back ‰ÛÒ I went out there today and I was consistent in the mud and these aren‰Ûªt conditions that usually suit me so I‰Ûªm pretty happy,‰Û