Red Bull KTM factory rider Toby Price changed up a gear into full Dakar Rally mode to take victory in the second stage of this offroad epic and move into the overall lead at the conclusion of the second stage.

The Australian finished 3.22 minutes ahead of factory teammate Matthias Walkner, who got a five minute penalty later on to loose second position to Paolo Goncalves, Xavier De Soultrant was third.

It was also a solid day for the third member of the Red Bull KTM factory trio. British rider Sam Sunderland wrapped up his stage in fourth to trail the leader by just 4.19 minutes. KTM factory rider Laia Sanz continued to lead the women‰Ûªs classification and finished the stage in 24th place, 16.29 minutes off the winning pace. She is currently 25th overall. What all the riders agreed at the end of the day was that the stage had not been easy. 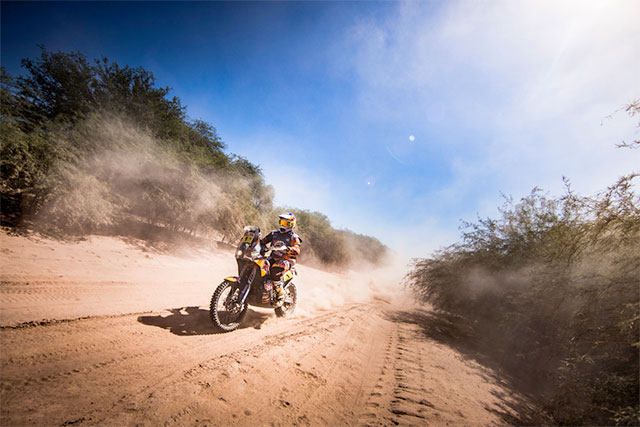 Defending champion Toby Price hit the front at the end of stage 2. Photo: Marcin Kin
Toby Price started the day in 17th place after a cautious start on Monday that was a fast but short timed special of only 39 km. He had taken the lead by the first checkpoint on his KTM 450 RALLY and then stayed in control through to the finish. Matthias Walkner settled into second place behind his teammate early in the stage and rode out the race in that position, but got penalized afterwards with five minutes and is now 7.39 minutes behind Price in overall eleventh with clearly gaining in confidence.

‰ÛÏToday was a whole different day. There was a lot of speed; a lot of fast roads and it was really dusty," Price explained. "We also had to deal with a lot of animals. It wasn‰Ûªt a tricky day in navigation but you can‰Ûªt put a cow in the road book and it becomes difficult when they are popping out at you. But it‰Ûªs good to get to the finish with this heat.‰Û 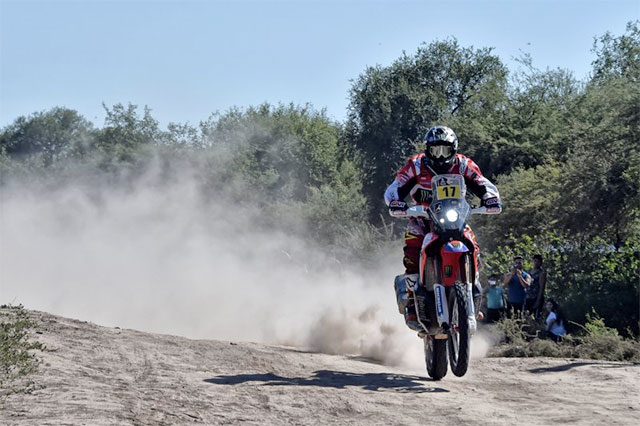 "We had a really quick part against the clock, filled with a lot of dangers such as animals crossing the track," GonÌ¤alves said. "I‰Ûªm pleased for the Monster Energy Honda Team: all the riders have arrived safe and in one piece, without having taken any risks; that is the important thing as the race has barely started."

"Things are going great for me so far. Today we got a proper taste of the Dakar with a hard and hot special stage," de Soultrait said. "There were lots of animals in the special and it was just so easy to get distracted. I pushed hard from the start but quickly realised I was maybe taking one too many risks. At one point I reached Ivan Cervantes and followed him for a little while. I think I lost something like a minute there but it helped me recalculate my priorities for the rest of the stage. I'm excited with my third place finish on today's stage. I'm now fourth overall so I have to remain 100% focused on each day and each stage from now on." 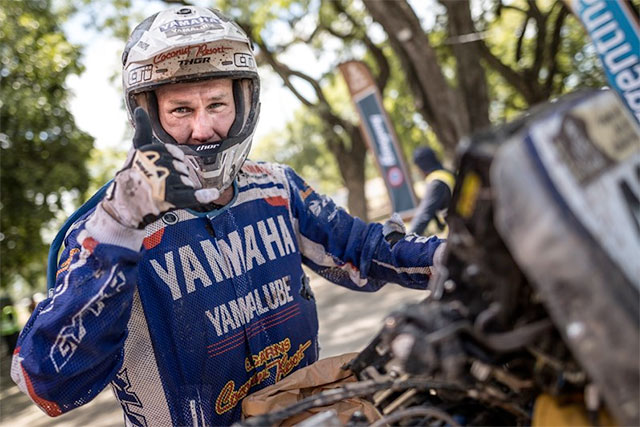 Thumbs up from Rodney Faggotter with the Aussie 10th in stage 2 and 13th overall
Australian Rodney Faggotter quickly got back up to speed and managed to bring his WR450F Rally home in an impressive 10th place. Feeling at home in the warm and dusty conditions in the Argentinean plains, the Yamalube Yamaha Official Rally Team rider is currently holding on to a solid 13th place in the overall standings.

Todd Smith is sitting 25th in the overall standings after finishing 25th on the stage, 16:31 off the lead. Another Aussie privateer Matthew Hart finished 36th and is now 58th overall.

On Wednesday the race turn north and follows the line of the mountains to San Salvador de Jujuy for another 780 km, including a 364 km timed special that organisers have promised will include difficult navigation.

Much of the first week of the rally is at altitudes above 3500 meters, adding another layer of complexity to this brutal competition. Riders also have to content with extreme variations of temperatures and Tuesday saw temperatures in the high 30s Celsius and 45% humidity as they passed through the difficult Chaco region.